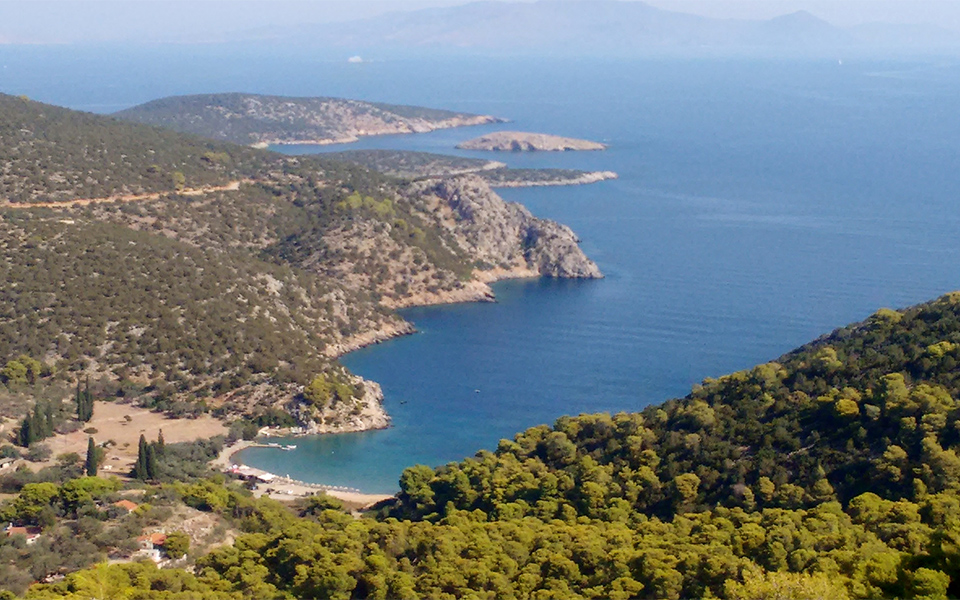 In Athens’ Backyard: a Quick Trip to Poros

In the shadow of its more famous sisters, Spetses and Hydra, the ‘middle child’ of Poros deserves some love too.

“You’re in the poorhouse? Again?” my New York pal said via Skype, channeling a line from the latest Taylor Swift video.

Honestly, as a journalist in the digital age should I be anywhere else? But man.

“Where is that? Is that near Mykonos? Have you seen Tom Hanks?”

“Do they have food?” 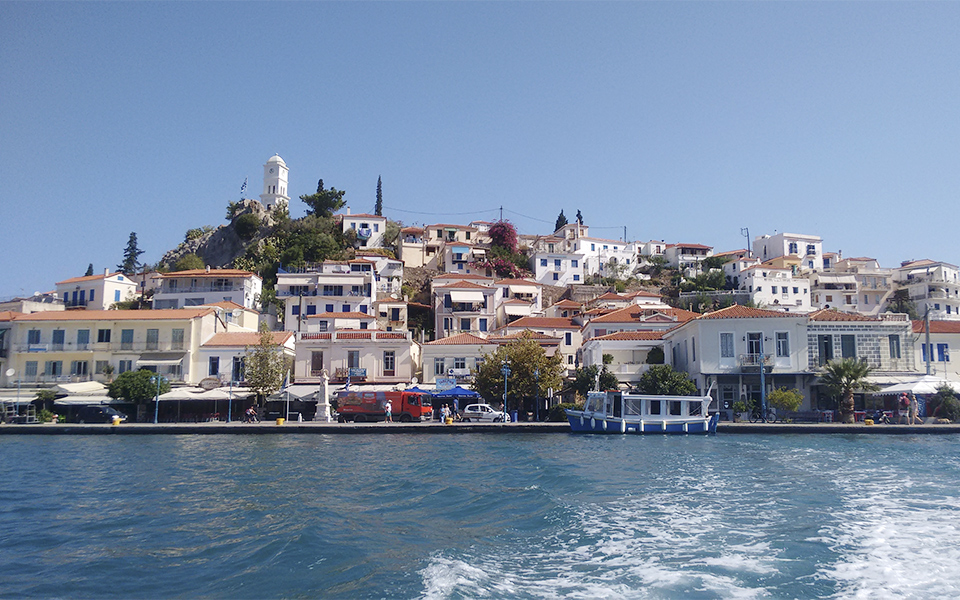 My apartment in Athens wasn’t ready, so I took the night boat from Piraeus. It was the last Wednesday in August. I’ve never cared much for Wednesdays, and August never thrilled me. Midway across the Saronic Gulf some sun breaks through the clouds in a burst of orange. I check into the Seven Brothers hotel and collapse.

Poros, I think, is not meant to be complicated. It’s the middle stop on those three-island day cruises from Piraeus, along with the more famous Hydra and Spetses.

Poros is the middle sister whose name everyone knows but whose face all forget. This is day trip territory for most. There is no drama. Whatever significance there is belongs mostly to students of Greek political history (Greece’s first naval base in modern times was built here), and the sights are few, although that is no cause for despair.

The beaches aren’t featured on any ‘best-of’ lists and the place as a whole lacks iconic, instantly Instagrammable images: there is no caldera, no Navagio beach, no Tom Hanks. 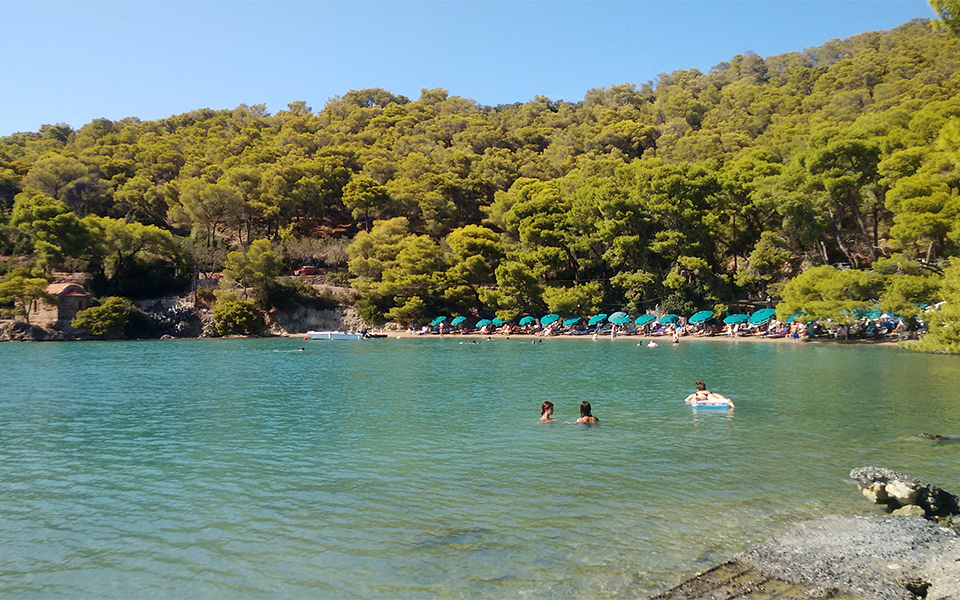 I think I’m going to love it.

There are two parts to Poros: the smaller Sfairia and the larger Kalavria, the two being connected by a narrow isthmus.

Sfairia is basically a pair of hills and the bulk of the small town is perched on the southern and western slopes of them. The south side is particularly picturesque as it overlooks a 656 meter-wide channel that separates it from the town of Galatas on the opposite, Peloponnesian shore.

Behind Galatas, a verdant mountain ridge stands sentry-like with a row of whirling wind turbines arrayed along the top. The effect is mesmerizing. Depending on the time of the day, the wind and the light, you don’t know if you’re really in the Saronic Gulf or on the shore of some northern Italian lake.

As you contemplate this, you let other priorities slide, and though Athens is scarcely 30 miles away, you find yourself – oh, look at those adorable cats by the boats! – on island time.

The flatter part of Poros town reminds me of nothing so much as the Zattere promenade in the Dorsoduro sestiere of Venice. It’s partly due to the smattering of neoclassical buildings opposite the water’s edge and the breezy outdoor cafés, but mostly it’s that milky blue sea channel.

It is very calm, and there are boats of all kinds passing at all hours of day and night: mega-yachts calling in for a few hours before heading on to Spetses or elsewhere, sailboats of all stripes and the boats that ferry locals back and forth from Galatas every ten minutes, or so it seems. In this respect I am reminded too of the Grand Canal. You see? Kaleidoscopic. 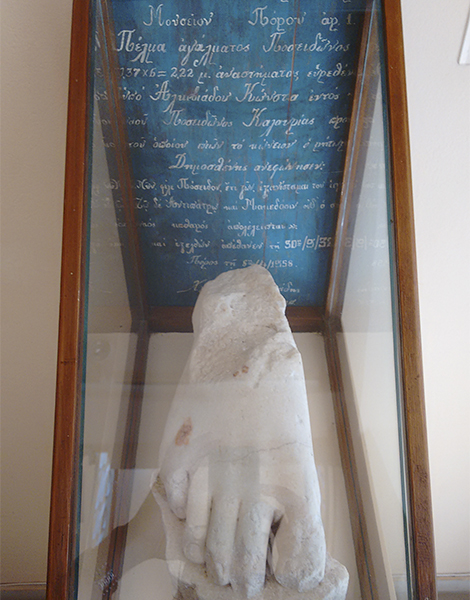 I am more addicted to pocket-sized museums of antiquity than to even pistachios from Aegina, and the Archaeological Museum of Poros does not disappoint.

It has just two rooms. The artifacts came mainly from the Sanctuary of Poseidon in Kalavria and also from Troizina, on the mainland. Admission cost all of two euros. Lots of small treasures, plenty of amphorae and fanciful terracotta figurines but my favorite item was definitely the big marble foot that a school teacher stumbled across in the 1950s, a remnant from a giant statue of Poseidon himself, apparently.

There is also as small Shell Museum on Poros, but my morning culture fix was enough; after a frappe on the Poros waterfront, I headed straight for the sea on foot. I found Limanaki Agapis, or ‘Love Bay’ – a lush and charming crescent shaped beach with a small chapel on one end of the cove, and a bright green pine-clad hill as the backdrop to it all. Okay, so the water was not the most crystalline in the world, but for being so close to Athens frankly it wasn’t bad at all, and actually rather refreshing. 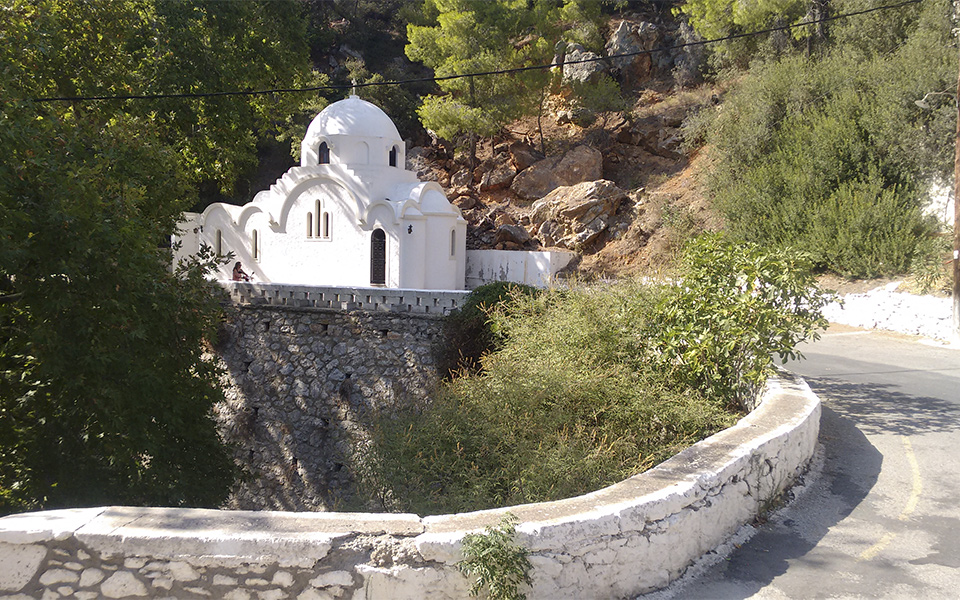 For dinner, I went to a restaurant called Primasera where I ate a nice big fish – a sea bream I think it was – nicely cooked and delicious. I told the owner’s wife, Eleni that I had had an amazing slab of apple cake earlier in the day, from the little bakery opposite the fish market. “My sister is the baker,” she said. “Here, have some watermelon.”

From the balcony of Room 11 here at the Seven Brothers Hotel I can take in all the action of the harbor: the little motorized boats from Galatas pulling in just a few meters in front, the sleek yachts arriving from Antalya or other ports, the waiters below setting the café chairs in perfect alignment every morning. 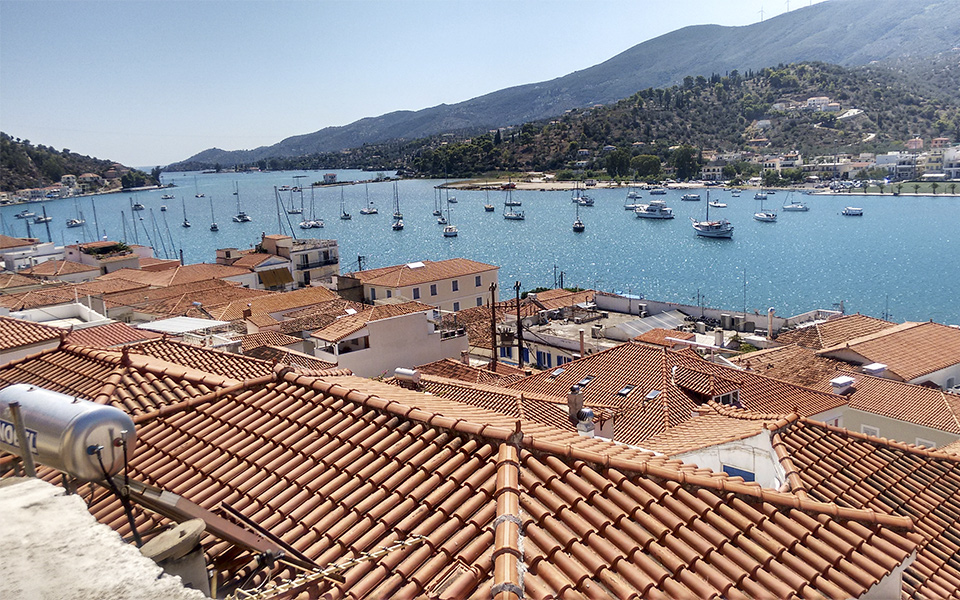 I feel less like Henry Miller than Hervé Villechaize in that classic TV series, Fantasy Island. Only here it’s all about “the boat, the boat!” rather than “the plane, the plane!”

Here come the honeymooners from the American Midwest using their extra day in Athens to get their mini island fix, over there are the bucket-list French tourists clutching their guidebooks, and some Chinese visitors with their selfie sticks. At the ATM machine down below I also see a father snapping in Greek at his young son who recoils in fear, and momentarily I feel bad. No picture is perfect. But like a traffic jam it passes and the Venice feeling seeps back in.

Looking out, instead of cars I see a line of tall masts gliding past the line of rooftops opposite my balcony. It’s an unusual image but one that is becalming rather than unsettling. Where is everyone sailing away to? The best apple cake is right here!

Another half-hour walk to Love Bay for an afternoon swim, a slow walk back in the breezy heat, some Kayak stracciatella ice cream (which is basically my drug of choice) and an early evening collapse.

As a native Southern Californian, I can be quite passionate about being non-productive, so Poros and I are starting to become good friends. But because Poseidon is hands down my favorite male Greek deity (it must be the trident…he really knew how to accessorize), I had to visit the Sanctuary of Poseidon which is not at all easy to find without a car (which I didn’t have). 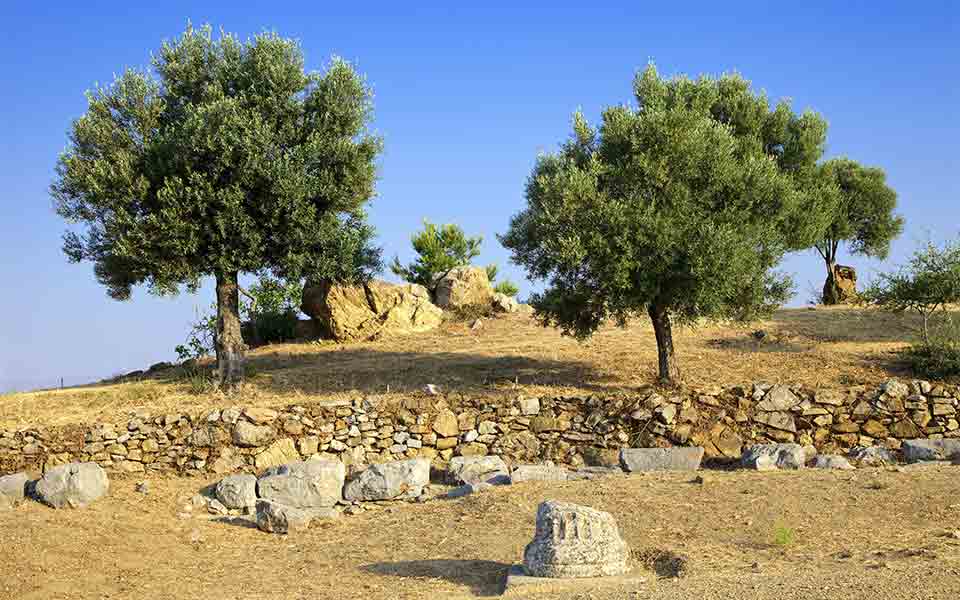 But mopeds come in handy so I jumped onto Eleni’s and off we went to a high ridge on the northern side of the island where the ruins are. And as unremarkable as they are to the untrained eye, (the Doric columns of the fifth-century BC temple having long since been removed), the view to the north up the Saronic Gulf is stunning.

Way down below at the end of the Bitsi peninsula you can see the itsy-bitsy bay of Vagiona, with its curved beach that is the only one on the island’s northern shore. 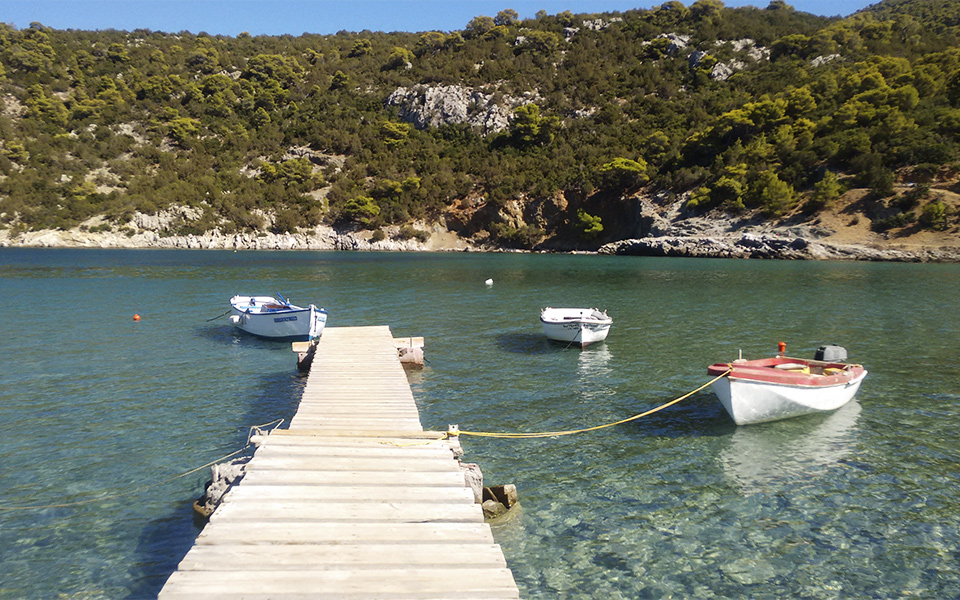 Under the water at Vagiona and not too far offshore they say there are the ruins of a sunken city. So back at the harbor I buy a swimming mask for a song and later in the day take a ten-euro taxi ride up to the bay.

The beach itself is pitch-perfect, just a thin crescent of sand with a single row of sun beds and a simple beach taverna that makes the best Greek salad I’ve had in a long time (yes! they remembered the capers, and even peeled the tomatoes!).

I slip off my jeans and slip on the mask and off I go, looking out for sea urchins and anemones. A few dozen meters out, the water – while not crystal clear – is not so opaque as to obscure what appear to be numerous stone fragments. But the current is strong so I swim back to the beach.

The bay is cradled by steep green hills on either side and for a moment I almost think I’m in some secluded Balearic cove, but then I look straight ahead, and I see Piraeus in the distance.