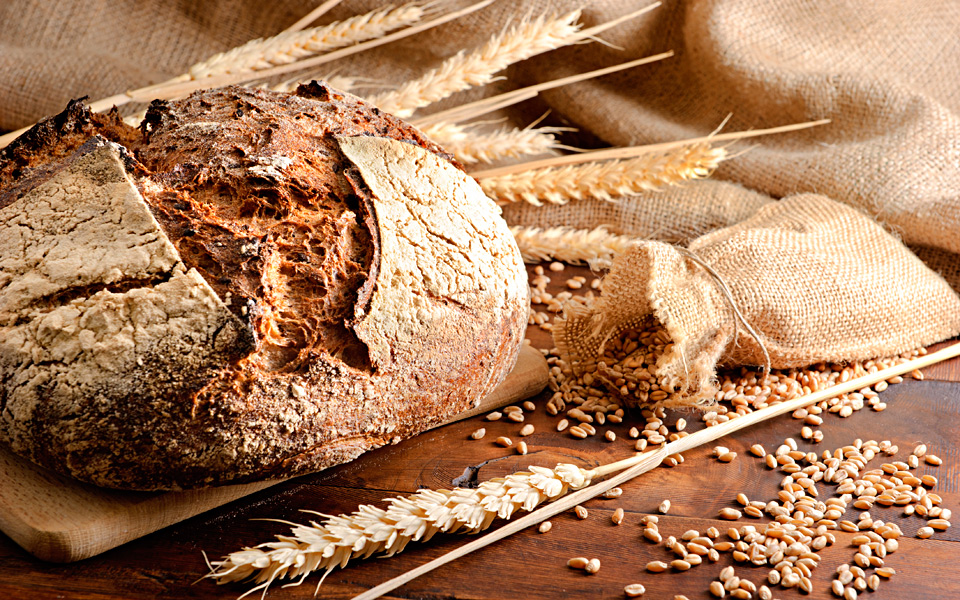 Down at my Local Bakery

A behind the scenes look at what goes into making bread and why Greeks are so fond of it.

The Greeks and their love of bread is an unbreakable force of nature. Living in a country where the neighborhood bakery is still the focal point of daily life is charming and bewildering in equal measure. Charming, because the routine of buying a fresh loaf of bread wrapped in wax paper is a dying image across much of the Western world; and bewildering because there is just so much of it!

This led me to my own little mishaps along the way. During my first year or so in Greece, I went to my local bakery and spotted a rather pretty looking round loaf on the shelf. Adorable. What was this gorgeous bread? I had to have it.

The baker looked at me uncertainly, and tried to explain what the loaf was, and, of course, I understood nothing. But as I insisted, she reluctantly packed one for me. I was delighted with my new find, until I presented it at home to much laughter. This prettily decorated bread was prosforo, the bread used in Holy Communion in the Greek Orthodox Church. I brought home the body of Christ for my sandwiches.

The Greek love of bread has fascinated me as someone who’s not much of a bread eater. Getting into the habit of always having bread on the table takes some getting used to. Bread, psomi, is the staple of Greek meals on which everything else is piled.

The chewy crusts of the typical Greek everyday loaf, the horiatiko, is used as an edible teething ring for small babies, as are the loops of sesame covered koulouria, sold on street corners where the person selling them will almost always adjust the toughness of the koulouri to the age of the child (the younger they are, the firmer it will be to prevent choking).

We’ve become so used to grabbing a loaf at the bakery and rushing on with our daily lives that I decided to find out about what exactly goes into making a typical Greek loaf of bread. To do this, I roped in my local neighborhood baker, Kostas Pantos, whose parents, Theodoros and Aphrodite, established their bakery, Ariston, 43 years ago.

I arrive at 10:00, in time for the second shift of the day (the first is at 02.30:00, when the bread for the morning rush is prepared). Kostas talked me through the entire process, giving his tips for the perfect loaf along the way.

“From start to finish, the entire process of making bread to the point where you take it out of the oven, takes an hour and a half,” he says.

“You have to add salt to the dough, otherwise it’ll be tasteless, but we also add a little sugar to give it a nice color. We only use fresh yeast, not dry. Sometimes, if we’re in a hurry, we’ll add a little extra yeast to make the loaves rise faster.”

Their workshop is directly behind the storefront of the bakery. It’s warm and cozy, with used baking trays neatly stacked up near the wall. A bag of lemons from their own trees sits in a corner, waiting to be used in various syrups for the sweets and cookies.

Their oven is the old-style one with bricks. 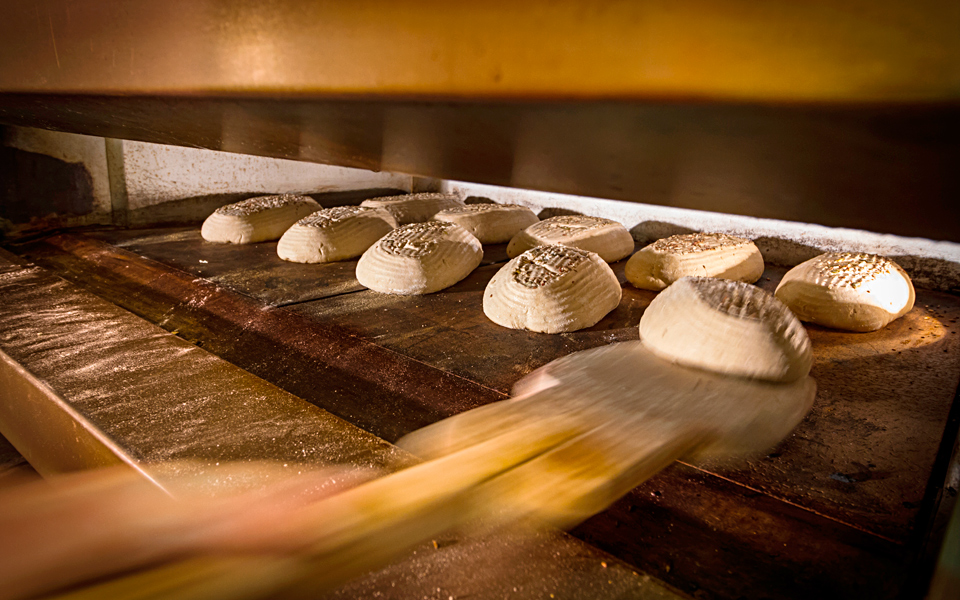 “The new ones are made with steel. But the bread from brick ovens is tastier,” says  Mr Theodoros.

The dough is mixed in giant kneading machines, and this, along with the bakery’s steam-injecting ovens, is what, Kostas says, makes the difference.

“This is why your bread at home doesn’t come out like bakery bread. You can’t knead it as fast.”

He presses a button and the ball of dough at the bottom of the mixer starts slapping around the bowl at a speed I know my feeble arms would not be able to match. It only takes two minutes or so. Tsoureki, he tells me, with its trademark stringy texture, needs to be kneaded for a considerable time, to achieve the ropey effect that marks out a good loaf from a poor one.

Once the dough is ready, it’s left to rest for a while, and I ask Kostas why he thinks the Greeks love their bread so much.

“I never really thought about it until I went overseas,” he says. “That’s when I realized how much bread we eat, and how many different types. It’s a matter of our culture. We’ve been tied to bread for eons. That’s how we grew up.”

The resting time is up, and the dough is portioned into pieces of 300 – 350 grams on an old-fashioned brass scale.

“Some people like the electronic ones, but I prefer this one,” he explains.

He shows me how to shape the balls of dough, pressing it slightly flat, folding it in on itself and then gently rolling it into the familiar shape of a horiatikο loaf.

He turns it over to show me the trick.

“See the seam where I folded the bread in half? That has to lie on the bottom.”

I roll up my sleeves and ask to have a go. My first effort isn’t too bad and makes it onto the baking tray. The second one ends up being redone a few times, and by the time it takes me to work on my two loaves, Kostas has already finished the rest of the batch. Guess I better remove “baker” from my list of backup careers. 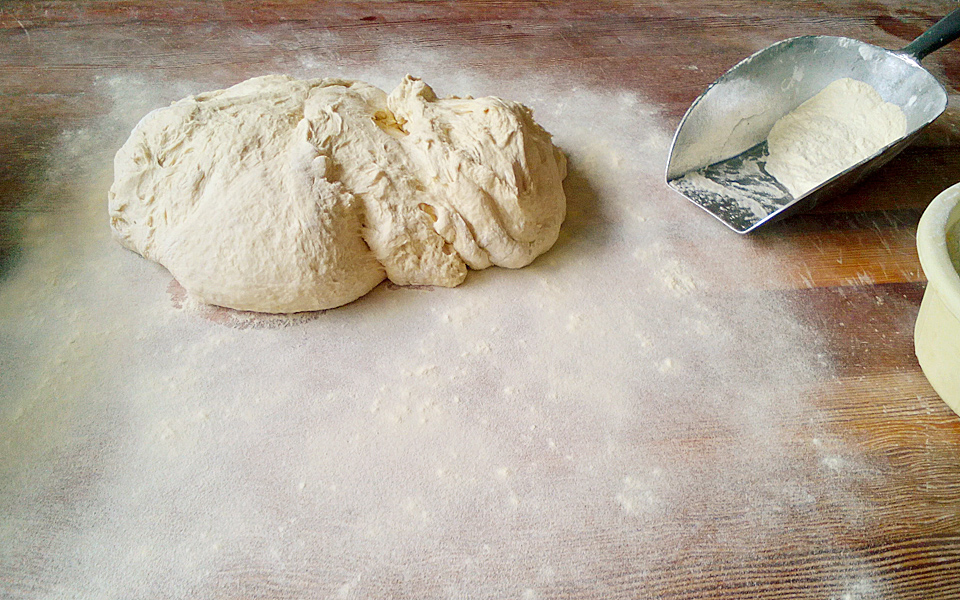 The bread is then baked for 45 minutes or so before it’s ready for the steady stream of customers that has been flowing in and out all morning, exchanging news about their health, the status of their grandchildren or lack thereof, and tidbits of political and social gossip.

In days gone by, housewives would prepare their dough at home, shape it and send it to the neighborhood bakery to be baked. It wasn’t just bread; any baked food could be dispatched to the bakery for cooking, especially during festive periods when your home oven might be too small to cook everything.

While I’m in the bakery, Mr Theodoros slides one of his giant wooden paddles into the oven and removes a tray of fat meatballs, nicely browned and happily bubbling in their own juices.

A customer will be along to collect them for their lunch later. It’s obvious that the tradition continues.

Today, someone in Argyroupolis will eat a loaf of bread made by my own two hands (sort of). I leave armed with the bakery’s own recipe so you can try your hand at baking your own Greek horiatikο bread at home, and get a renewed appreciation of the amount of hard work that goes into getting these beloved Greek loafs on the table every day.

Preparation: Preheat the oven to 180 C. Mix the dry ingredients together and add the yeast. Add the water, going a little at a time, until you have firm dough. Knead well for 10 minutes and leave to rest for 15 minutes. Split the dough into two balls and flatten out roughly, fold in half, and gently roll into an oblong shape, making sure the seam stays at the bottom. Leave to rest on a baking tray under a damp towel for 20 minutes (15 if the weather is hot) and bake for 30-40 minutes.

If baking your own bread is too much effort, here’s when you can ask for “Ena horiatiko parakalo” (One horiatiko please).

Lykavittos, 59 Deinokratous, Kolonaki. Tel:(+30) 210.721.1348
One of the first bakeries in Athens to bring German-style bread, which is sold alongside the usual Greek varieties.

Ariston, 85 Gravias, Argyroupolis. Tel: (+30) 210.992.5863
If you’re willing to venture further, drop by my neighborhood bakery for the best bread and spanakopita (in my opinion) and say hi to Mrs Aphrodite.