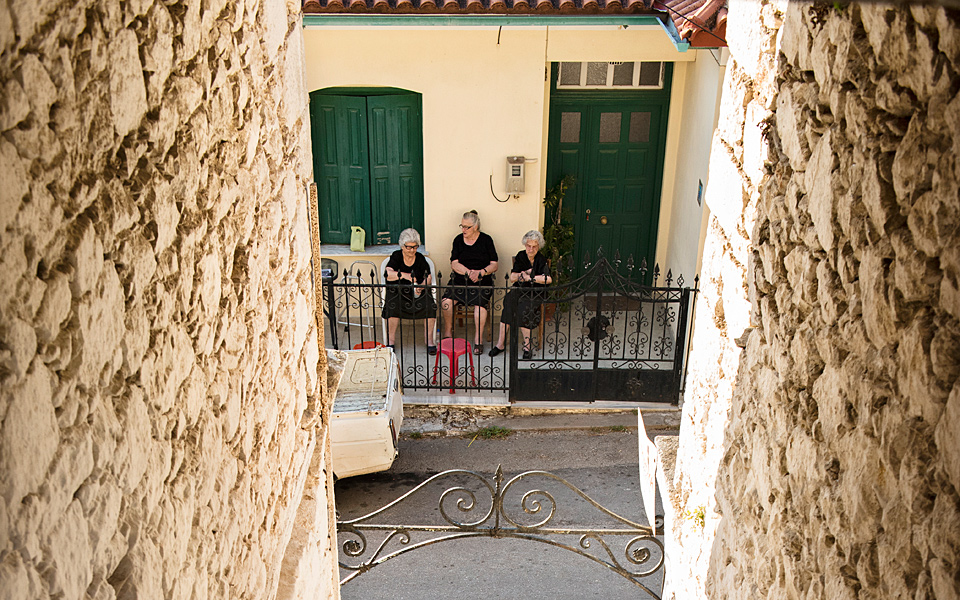 The Street Cameras of Agiasos Village

Where people watching is serious business

If you want to feel the fleeting joy of having everyone notice you as you enter a space, try walking through a Greek village. In these small places, conversations quickly become heated with gossip and speculation as trivial things assume gigantic proportions.

After wandering for a few hours through the cobblestone lanes around the square in the traditional settlement of Agiasos in southeast Lesvos, I lose track of my photographer. As I phone him, three hands appear out of nowhere, pointing: “He went that way.”

Agiasos owes its existence to, a monk, Agathon, who, according to tradition, came to the village with an icon of the Virgin Mary holding the Holy Infant (Panayia I Vrefokratousa), as painted by Luke the Evangelist. He hid it in the woods and built his hermitage there sometime around AD 803. Over time, it grew into a monastery and became a widely known religious center.  The first church of Panayia was built at another site in the 12th century and the settlement grew up around it, secluded in a valley so it would not to be visible from the road and vulnerable to pirates.

It is now home to 2,500 people. It was primarily settled by craftsmen, mostly potters. Many of the village’s features are associated with the church. The tradition of ceramics, for example, developed from the fact that the faithful visiting the monastery asked for a bottle of holy water to take home. The clever Agiasos residents began to make small pitchers and gradually developed exquisite skills in pottery-making. 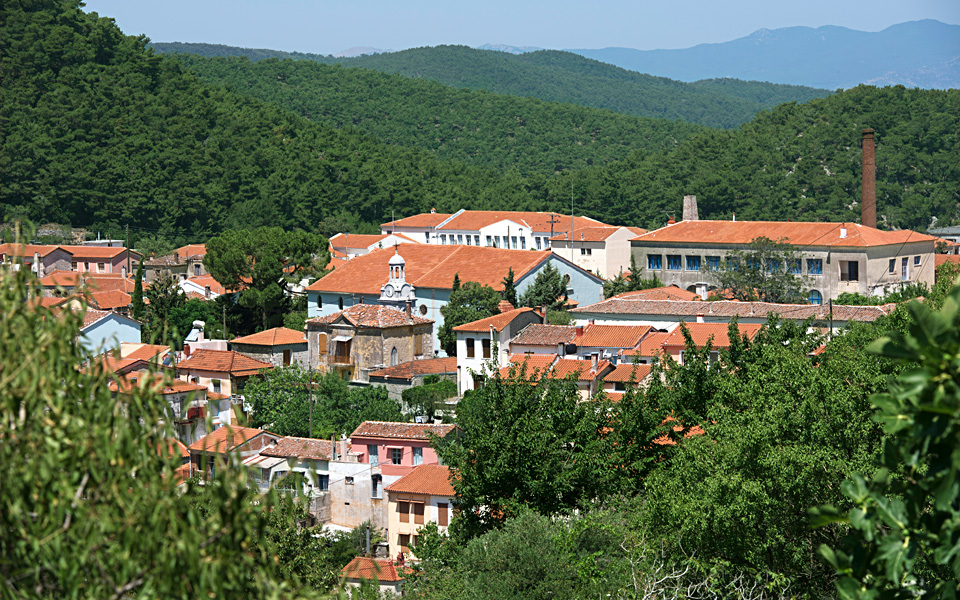 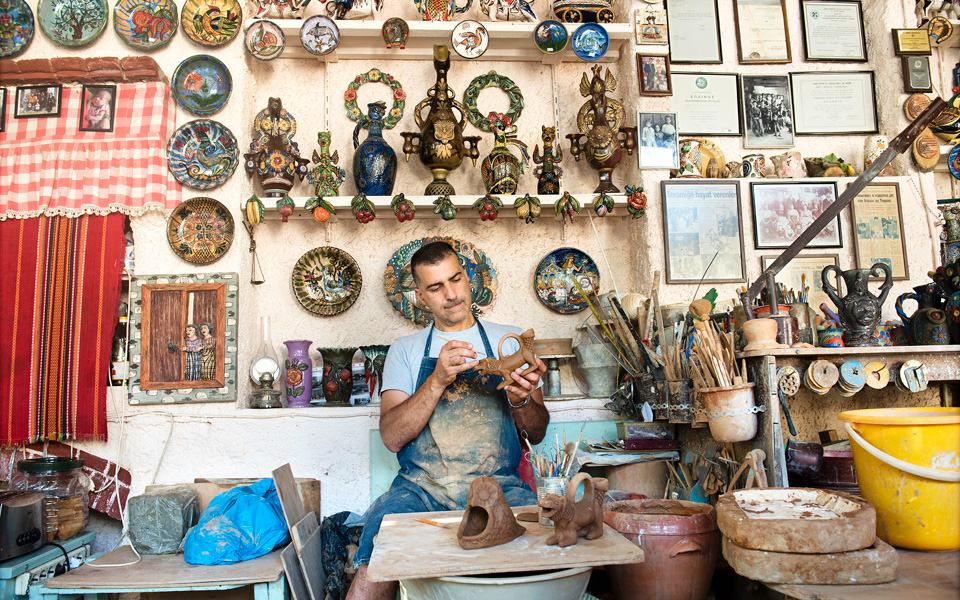 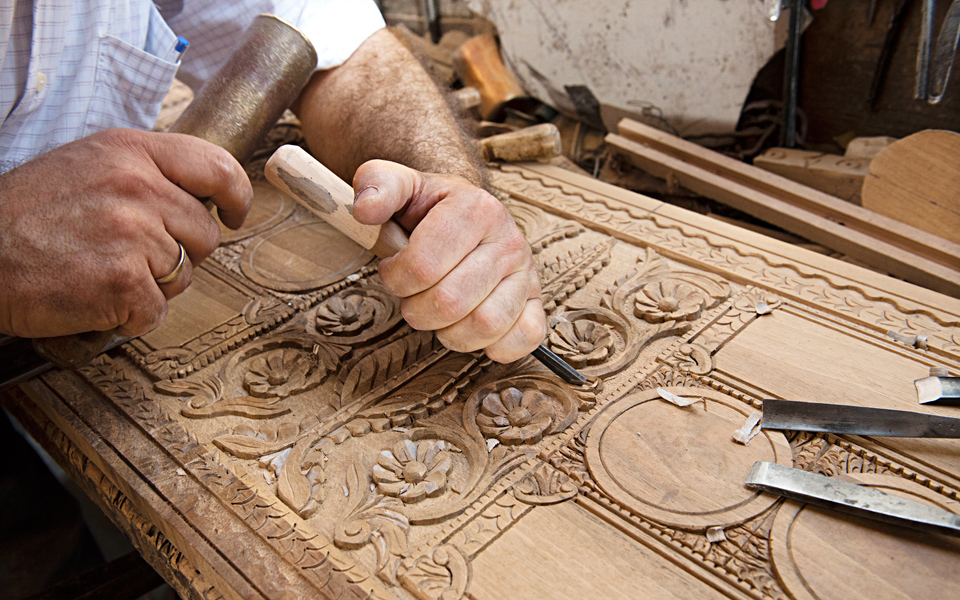 The Hatziyiannis pottery workshop is a landmark in the village. Dimitris practices the art he learned from his great-grandfather from Çanakkale in Turkey, where ceramic art was a tradition. He built his workshop in an old coffee shop and works with his father, Ioannis, who still uses the potter’s wheel despite his 83 years. His work includes items in animal forms, decorative plates and vases with folk art depictions of life in Agiasos over the last century: craftsmen making saddles, bells and horseshoes for the animals, weavings made from donkey and goat hair, images of the harvest of grapes and olives and woodcarvers.

Master woodcarver Dimitris Kamaros taught his art to more than 100 carvers in Lesvos. As I enter his workshop, naturally lit by an opening in the roof, I see him working on a piece of Lesvos walnut wood for the templon – a barrier separating the nave from the sacraments at the altar – of a church in another village. Kamaros made the chandelier for the church of Panayia –  it took him a year –  and also sends religious items, carved furniture and other objects all over the world: France, Germany, and the US –  even Zimbabwe. His art has been handed down through the generations and he has been doing it for 70 years. Now he’s 80 years old but doesn’t think about retiring.

“Every morning, I get out of bed and come here. Besides, I’m married and everybody wants to avoid being at home,” he says jokingly.

I don’t know if the men are really avoiding something, but the traditional coffee shops here are always full. They are a mandatory stop before going home for lunch. Stavri is one of the oldest coffee shops in the village and is the gathering place for retired seamen, farmers and merchants. Combining ouzo with cured sardines and the imagination with reality, they tell stories, tease one another, laugh and philosophize tirelessly.

The walls are decorated with huge old keys, tools, pistols, photos and verses of folk wisdom written in the unique dialect of Agiasos. The proud residents of the village state they are from Agiasos, not from Lesvos and have even published a dictionary of their dialect. 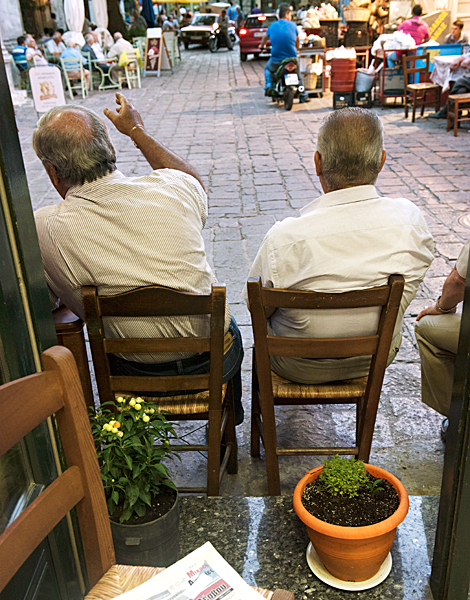 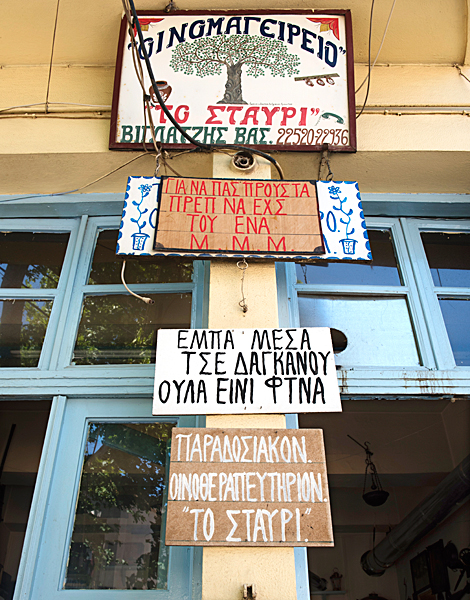 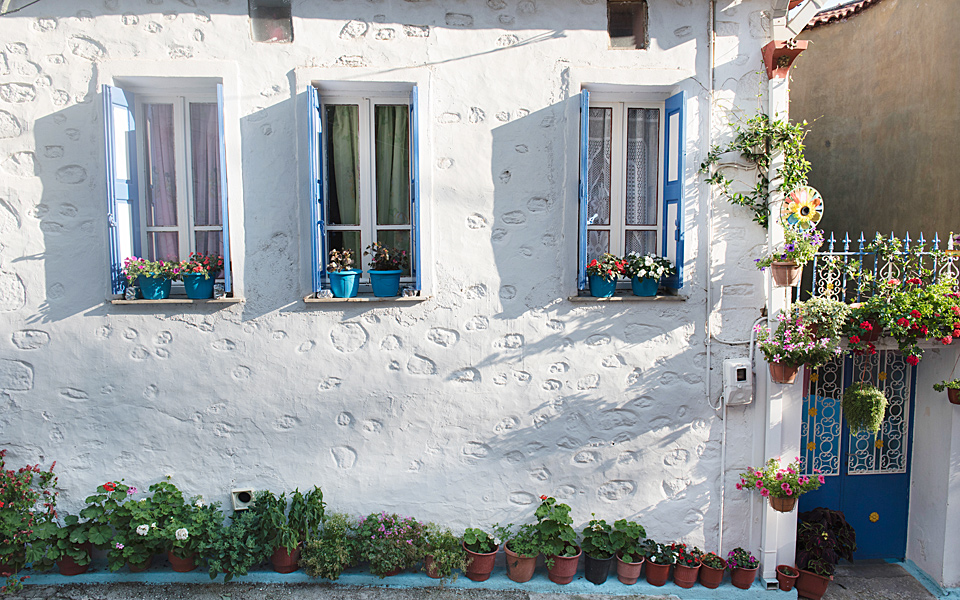 Most young people feel limited here and can’t wait to leave. However, others, who are not so rebellious, learn to play the santouri. Kostas Zafeiriou has devoted his life to this traditional zephyr-like wooden instrument with 110 strings that he says is like a human body.

“It needs tuning, it expands and contracts. It is like a human being –  it gets cold and hot, just like us.”

He started teaching recently at the Agiasos Reading Society, where his students range in age from 8 to 85. “It used to be fashionable,” he remembers. “I had a group; we would get invited to the coffee shops and would walk around the village with the santouri strapped around our neck and play in the neighborhoods. We would end up under the window of some young girl for a serenade. If the couple had exchanged vows and her parents approved, she could come down and offer us something. If the parents didn’t know and they heard us, we would move along and act indifferent.

As soon as the sun sinks lower and the heat recedes, the homemakers come outside and sit in the road. They chat, knit and reminisce. Strangers are scanned from head to toe as they try to decide if they remind them of someone. I order a traditional Greek coffee at the square before I rush over to the grocery store across the street for a quick look.. The owner, Katina, approaches with a smile and I ask about sardines. She shows me the cans and offers me a piece of their traditional cheese. Before I even begin to swallow, she has already stuffed a piece of bread in my mouth, like my grandmother would have done.

“She is very pushy, ” says the coffee shopowner, Christofas. “See how she got you to buy it? She doesn’t know a word of English, but no tourist ever leaves her store without a bag of something.”

He has barely finished his sentence, when Katina comes rushing to the table with her Mona Lisa smile, and the cheese and three cans of sardines in her hands. “What else did you say you wanted? Honey? I noticed you were looking at it.”