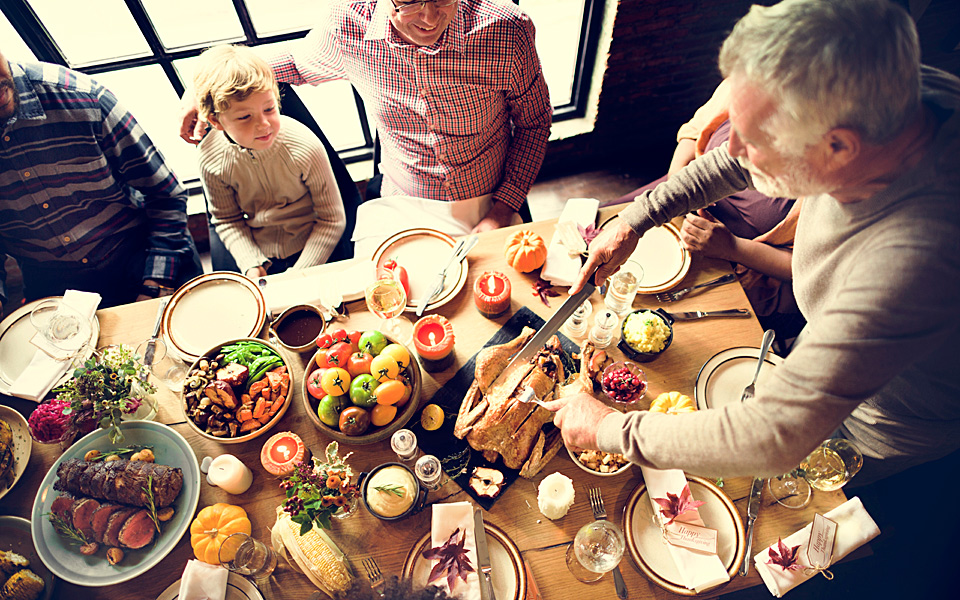 Thanksgiving with a Greek Twist

The sun is shining brightly here in Greece as it does every day. The turkey is in the oven because once more this year I am celebrating Thanksgiving in Athens, when suddenly I recall the famous quote by Toula’s father, Gus Portokalos, from “My Big Fat Greek Wedding”: “Give me a word, any word, and I will show you that the root of that word is Greek.”

So what about Thanksgiving?

“Ah yes, Thesmosphoria,” I can imagine Gus Portokalos saying on Thanksgiving Day. He would begin by dissecting the word. “Thesmos” is the imposition of law, which suggest something held in common whether a pasture or a custom. While “Phoria” means bearing. He then would explain, “Thanks” is an expression of gratitude, appreciation or acknowledgement of a benefit or favor or the like, while “Giving” means providing.

And somehow, in some crazy way, he would correlate the words; and not be that far off because there are many parallels to the Thanksgiving that is being celebrated today in the United States,  Canada’s Thanksgiving celebrated in October, and the ones in other nations, such as Germany, Japan and the UK that celebrate something similar in autumn.

This is because Thanksgiving is a celebration of the blessings of a harvest, and “Thesmophoria” was the first such celebration, when the Ancient Greeks wished to thank Demeter, also known as Thesmophoros, the Greek Goddess of harvest and agriculture – Demeter presided over grains and the fertility of the earth. Thus, the first Thanksgiving in fact took in place in Greece.

Mr. Gus would then take it one step further and begin to analyze the traditional components of the Thanksgiving Dinner, which is composed of sweet vegetables and even the meats, turkey and ham, prepared and marinated with citrus fruits, honey and maple syrups.

He would remind us that squash, pumpkin and corn date back to early Greek agriculture, as Demeter was also known as the Corn Goddess. The pilgrims in North America, who hunted the native wild turkey, were introduced to pumpkin, squash and corn by the Indians.

He would then explain how this type of goose was also being imported at the time to Europe via the Middle East by merchants from the Ottoman Empire, – the predecessor of the modern state of Turkey – which had, by then, replaced the Greek speaking Byzantine Empire as the dominant power in the region. Given this train of thought, Mr Gus might argue that even the very word, turkey, has a Greek connection.

As I was born and bred in the US, Thanksgiving was always a holiday we prepared for, and we regularly engaged in discussion over its origin and history at school, at least a month ahead –whether making turkeys out of paper plates with feathers glued on them in kindergarten or keeping a daily journal of all the things we were grateful for all the month of November in high school.

Therefore it was very difficult for any Greek-American child to not keep reminding his/her Greek immigrant parent that we had to celebrate Thanksgiving. Personally, I recall many occasions leading up to Thanksgiving where I had to remind my parents not to forget to buy a turkey for that upcoming Thursday. As Greek-Americans are all somehow related, – Mr Gus would search through Ancestry and find some type of relation – we refer to other Greek adults as “Theio” and “Theia” (yes we have an infinite number of aunts and uncles, technically not related to us).

So after literally twisting our parents’ arms to host Thanksgiving Dinner, one “Theia” would call the other “Theia” and ask what she should cook and bring in order to alleviate some of the burden of hosting a 30-person minimum dinner. The usual responses always included “I’ve got the Turko (turkey, not the Turk – the same word, Turkey, is used to describe both the bird and the country) and the Hiemi (which is the slang word for “ham” used by Greek Americans). Why don’t you make the “Dolmades” (stuffed grape leaves) that you make so well”? And of course there are multiple references to “Pastitsio” (Greek Lasagna), “Tyropitakia” (Cheese Pies), “Spanakopita” (Spinach Pie).

Again, Mr Gus may also explain that squash and corn and pumpkin have all somehow originated from Greece.

With the exception of the pumpkin, which is used in the Greek version of a sweet pie in phyllo crust with walnuts and “trahana” (a crack wheat or a couscous like paste and fermented milk), Greek-American Thanksgiving Dinner primarily consists of the turkey and ham, while the rest are Greek traditional dishes; many times, snubbing the sweet potato casserole and cranberries (whose usage still remains a mystery to many Greeks there, who are not sure if it is a dressing sauce to be poured over the turkey or an appetizer dip).

As I grew older and became a mature thinking and contemplating adult, the significance of a turkey on the table and what side dishes it was accompanied by, became somewhat irrelevant, compared to the importance of the deeper symbolism that we were celebrating on Thanksgiving.

This is probably because most of us no longer harvest corn or squash. Instead, we labor over material work and try to cultivate meaningful relationships with our family and friends.

Therefore, Thanksgiving had become the predominant holiday to spend with family, close friends and loved ones, showing each other how much they mean to us. So when I moved away from home and my parents, and back to their homeland, sixteen years ago, Thanksgiving became a bittersweet holiday for me, because I was so many miles away from them and could not be home to celebrate it with them.

However, a year ago I woke up days before the fourth Thursday of November and decided I was going to make a traditional Thanksgiving Dinner for my Greek relatives and friends in Athens, like the one American Indians and European Settler/Pilgrims shared to celebrate their first collaboration in harvesting the soil they were now peacefully going to have to share; because, in lieu of my parents, they are the ones that I to turn to on a bad day, or who “have my back” and are here to support me when things get tough.

These are important relationships that I have cultivated and am grateful for. They, of course, just thought I wanted to show off a dinner I technically never had made before (since my Mom or a “Theia” had always prepared it back in the US for all those years). But as the years have gone by, they too have understood that, sometimes, we need to stop and take stock of our lives and say “Thank you” to all those we appreciate, for always being by our side, and acknowledge all the things we have in our lives that we should not take for granted and be grateful for.

In this day and age with everything that is so confusing, disruptive and unsettling, there should be a globally set date all over the world when we can all stop at the same time, think about what we have in our lives, and who we have in our lives, and be grateful. And I would have to agree with Mr. Gus “Portokalos” (that comes from the Greek word meaning orange, used in many of the dishes on Thanksgiving by the way) that such a campaign for an International Thanksgiving Day should start here in Greece, where the first Thanksgiving to the Ancient Gods took place, the birthplace of the Thanksgiving!