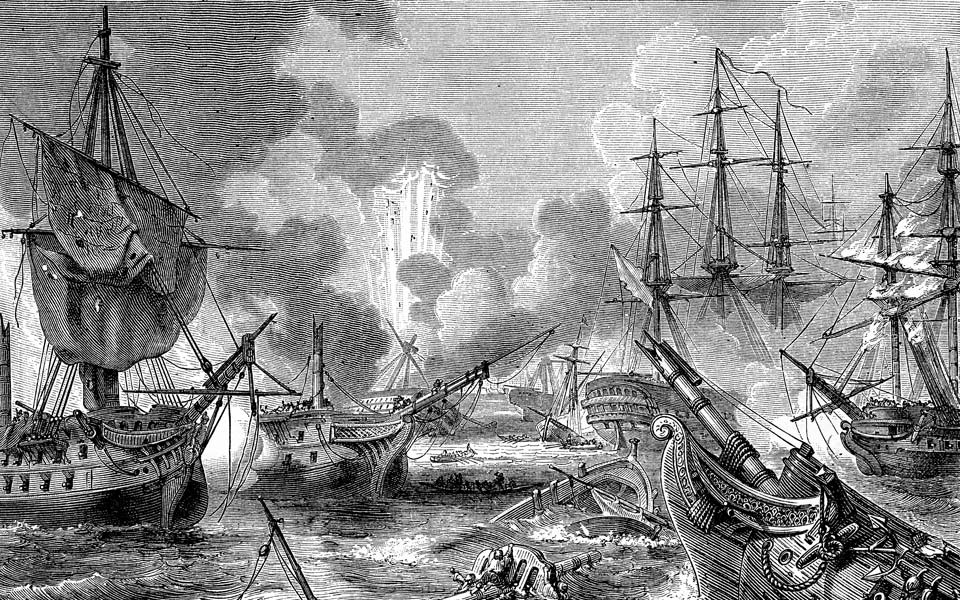 Autumn in Pylos: An Expat’s View of the Battle of Navarino Re-Enacted

On a balmy Saturday night in late October, I sat comfortably on the small yacht of a family friend, staring from the Ionian into the Bay of Navarino waiting intently for one of the ships in the bay to burst into flames. But, that’s not what happened – at least, not initially. Two vessels first positioned themselves strategically and then circled one another like boxers in a ring.

As the shadowy figures of the ships moved about, I listened to the announcer narrate the story of the Battle of Navarino, colloquially called Ta Navarinia in Greek. The battle was fought on October 20, 1827 and is now considered a great turning point in the decade-long Greek War of Independence. It was my first time attending the event commemorating this battle, and with the privilege of a clear view without having to jostle other spectators for a good vantage point, I took it all in:

Over the narrator’s voice, the sounds of cannons boomed from the sound system. I watched as one of the ships suddenly caught ablaze. The dark waters glowed orange, and the crowds along the harbor roared with excitement. As the ship burned to its frame, fireworks ensued and a number of lanterns, released by spectators on the shore, floated up into the atmosphere to honor the lives lost that day. When I turned to look at my little cousins, aged 12 and 10, their eyes were glued to the scene in front of us – one depicting a historical event that is something of common knowledge Greece, but of which I knew nothing about before arriving in Messinia that weekend.

What actually happened at the Battle of Navarino

At the Bay of Navarino in Pylos – an area that today is perhaps more famous for the 5-star Costa Navarino Resort – allied British, French and Russian forces intervened to fight (and ultimately defeat) key forces of the Egyptian-Ottoman fleet.

According to the historical accounts I’ve now read, of course, they hadn’t intended to get so involved; they just sailed in to intimidate the Ottoman-led forces from trying to crush the Greek rebellion. It was only when a skittish Turkish soldier fired a few shots that the combined powers fought back with cannon fire. In less than a day’s time, Greece’s allies sunk about 60 ships, and thousands of sailors went down with the vessels. 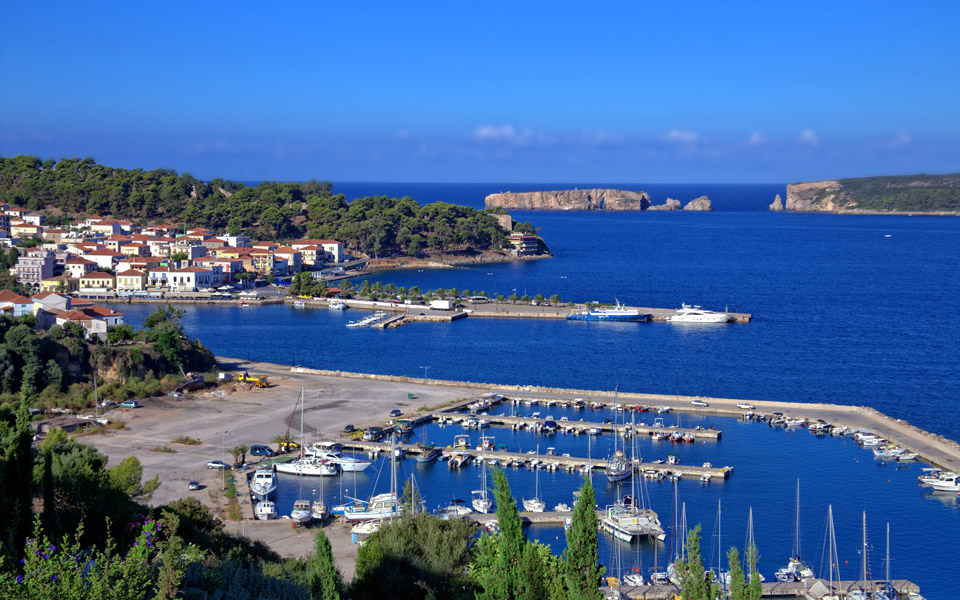 The city of Pylos hosts an evening event where crowds of people (which this year included politicians like opposition leader Kyriakos Mitsotakis and former prime minister Antonis Samaras) come from all over the Peloponnese and the rest of Greece to watch two ships, each representative of the opposing sides, duel. The bout is quick and very noisy, and the Egyptian-Ottoman “ship” (actually an almost-life-sized model) ultimately burns to a crisp.

The event is televised and afterwards, spectators flock to the tavernas of the town square adorned with strings of British, French, Russian and Greek flags, to continue the festivities. It’s a significant celebration in the region, which made my ignorance about it all the more surprising.

The point of re-enacting the battle

The fact is that being the second generation of my family to grow up in the States, I attended Greek school from a young age. And, of course, history lessons were a part of the curriculum from very early on. It was considered paramount that I learned all about the Greeks’ contributions to the modern world and other significant historical movements. Studying the Greek War of Independence demanded much of our classroom time each year from January to March – as Independence Day (March 25) drew near – and the lessons became more in-depth as I got older. Or so I thought, anyway, given that I ultimately remained ignorant about the impact that the Battle of Navarino had on the outcome of the war.

I also had little understanding of the role re-enactments play in modern Greek culture: Re-enactments from battles of the 19th century war happen all over Greece, from Peloponnesian cities like Kalamata to the Saronic islands of Hydra and Spetses. And these performances probably aren’t merely a mechanism for Greeks to flex their nationalistic muscles, for without the allied forces, there’s no telling what the upshot of the war would have been. 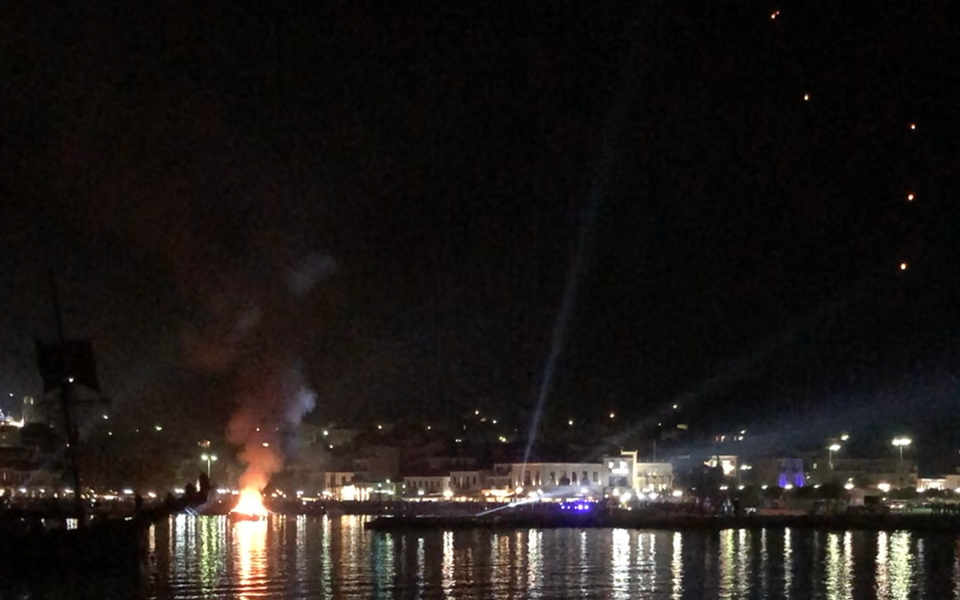 “[We] want to show younger generations how it happened, and [we] want to celebrate the history” my aunt, born and raised in Greece, explained to me. That’s why she and her friends cart their children to events like these.

In America, re-enactments play only a small role and are generally considered quite niche (some would say geeky), a form of live-action role play for enthusiasts. They take place mainly in the southern states and serve more as a hobby for those interested in the Civil War. Though I’ve never been to one, I know that television networks don’t generally cover them, and prominent American politicians don’t attend them. They certainly never felt key to keeping memories of history alive.

In Greece, perhaps the same thing applies: Even if no re-enactment is held again, what happened during that fateful naval battle is still a matter of historical record. But as we gazed into the flames set to the ship in Navarino Bay, the events of the past suddenly seemed much more three-dimensional. It’s a recreation of the events, and, maybe just as importantly, of the drama.

Perhaps in years to come my cousins will be the ones to bring their kids to see the ship set alight in Navarino Bay. And perhaps in the crowd there will be a few similarly startled Greek-Americans. And perhaps they’ll all meet later in the taverna and have an added reason to discuss where the country came from, and where it’s going.