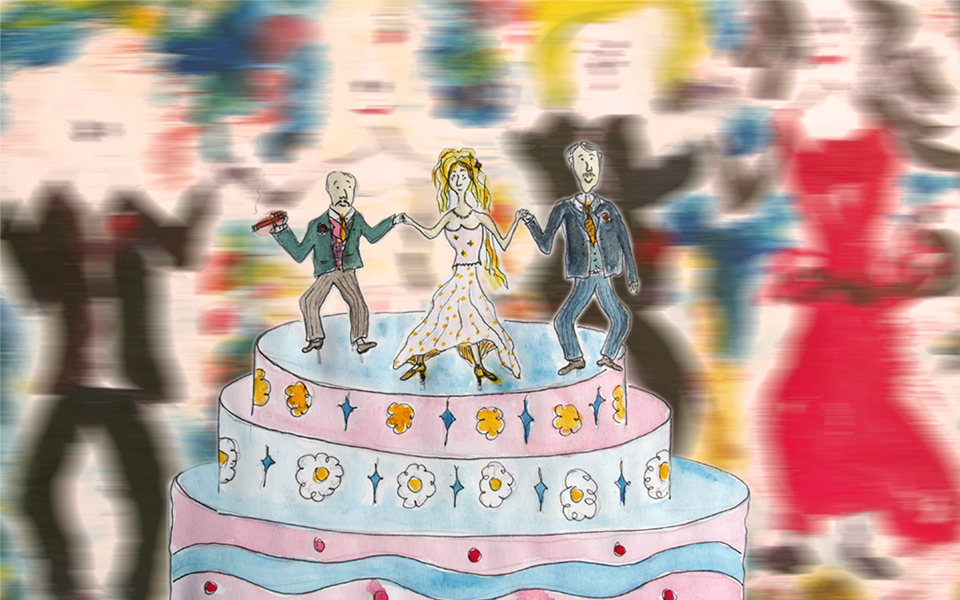 A Bluffer’s Guide to Greek Weddings

They don’t always have to be big and fat…

The first time I went to a Greek wedding, I respectfully dressed in a smart suit, my hair neatly pulled back and with minimal make-up.

I was vaguely aware of my husband in the background yelling at me to wear something more glamorous, but what did he know? I’d watched My Big Fat Greek Wedding, and I was not going to be the xeni (foreigner) who trampled all over the sensibilities of my hosts. I had to be respectful of the church dress code!

As we walked into the churchyard, it was as if I had stepped into an episode of Dynasty. The towering stilettos, the glittering dresses, miniscule skirts, cleavages so gravity defying that NASA should be called in to investigate, enormous hair and more makeup than a MAC store.

It was a sight to behold.

Even the men were more dressed up than I was. The wedding favors came in a better outfit than I did, for goodness sake.

Weddings in Greece are enormous celebrations and a chance to go all out in every way, from how you dress to how you dance. Families use weddings as a status marker and, even in this miserable economy, they will gladly put themselves into debt to throw a wedding where guest numbers are between 200-500 or more. I should point out that a small minority of Greeks prefers much smaller, low-key affairs (much to the chagrin of the couple’s mothers) but these are still a new trend.

Of course, such happy times are for sharing, and so don’t be surprised if you receive an invitation, even if you don’t know the couple that well. Many are the tales of the lost tourist being pulled into wedding celebrations when they stopped to ask for directions.

So, should you find yourself invited to a Greek wedding, here’s what you need to know:

Each part of Greece has its own wedding traditions, which, sadly, are slowly being abandoned in the cities in favor of a more Western way of doing things. But some are still adhered to, and one of them is called to krevati (the bed).

A few days before the wedding, family and friends of the bride gather at the future marital home. The home is cleaned and decorated, and the bride and her unmarried friends make up the marital bed. Money is thrown onto the bed for prosperity, then rice to symbolize putting down roots and finally, a baby is tossed onto the bed for fertility. The baby will often be male, unless the couple clearly state they want their first child to be female.

Prepare to go all out if you’ve been invited to a Greek wedding. Unlike the UK, an invite to a wedding is not an excuse to wear a silly hat or a fascinator (no one will be fascinated, trust me). You do, however, have full license to go for as glamorous a look as you can muster. Less is not more; more is more. You don’t want to be mistaken for the impoverished cousin from the village, and your hosts will take your efforts as a compliment.

In the past, wedding presents consisted of things which would help set the couple up in their new lives together, but seeing as most couples these days already cohabit before tying the knot, cash gifts are acceptable and, luckily, the trend of weddings lists at department stores is catching on too. The couple will be busy, so hand the envelope to a member of the wedding party.

4) HONKING HORNS OUTSIDE THE CHURCH

It’s tradition for the bridal party to make its way to the church and honk horns the entire way. Feel free to join in. Once at the church, the bride will be driven around the block a few times, horns honking all the while, to keep the groom waiting outside the church on his toes.

5) NOT AS QUIET AS A CHURCH MOUSE

The Greek marriage ceremony does not take all that long, and for its duration, people come and go from the church as they please. The priest does all the talking and the couple exchanges no vows. Watch closely for the light-hearted moment when the bride is expected to step on the groom’s foot. This is when, as part of the unchanged and old-fashioned marriage rites, the priest has just said that the “wife will fear the groom” and it’s her way of saying “I don’t think so, pal.”

When it’s all over, rice is thrown and the couple lines up to receive greetings from the guests. If you find yourself in the line with the bride and groom approaching fast, these are the greetings to use:

“Na zisete” (may you have a long life) to the couple

If you’re unmarried, expect to hear lots of “kai sta dika sas” (and here’s to yours) which are meant to encourage you to stop messing around and settle down with this nice Greek girl/boy you’re dating.

Just before everyone heads to the reception, wedding favors are given out. These are fabulously elaborate creations, sporting more meters of creamy tulle than the Russian State Ballet and decked out with ribbons, little jewels, the couple’s initials, or anything else their heart desires. Once you wade through all that tulle to the middle, you’ll find a handful of sugared almonds or sugared chocolates. These will always be an odd number to symbolize the fact that the united couple can’t be divided.

Once the church ceremony is over, everyone piles into cars and heads to the reception which might be located some way away, or even to the countryside where competing reception venues sprawl across the olive groves.

In days gone by, the women from both households would spend days cooking the wedding feast and this is what I thought was the case, thanks to too many years of watching travel shows about Greece. These days, the reception venues take care of all the cooking.

No explanation needed. Go for it, have fun, but don’t get stumbling drunk. That’s fine for members of the wedding party to do, but for guests to get epically drunk is a no-no. Get merry, but pace yourself and be a gracious guest.

Unlike Western weddings, speeches are not made at Greek wedding receptions. They get straight to the point: eat, and then dance. After eating and the greetings from the couple, the dancing starts and this is where the Greek joy of life truly comes into play.

With some 10,000 styles of traditional dance, the Greeks can outdance anyone. Dancing usually starts with traditional styles and music in homage to where the couple are originally from (and to keep the elders happy) before moving on to contemporary music.

Expect the dancing to last all night into the early hours and for everyone to join in. You are bound to be dragged in, so be a good sport and don’t worry about not knowing the steps. One of my favorite moments is when, a few hours in, the men and women take turns to dance the free-style, moody zebeikiko which is danced solo.

Zebeikiko is considered a state of mind as well as a philosophy, and a dance where you perform with your soul, not your body. Sometimes, the dancer will perform playful stunts like dancing around a lit cigarette that has been balanced upright on the floor, or a glass of wine. An audience will gather around and kneel on the floor to cheer and clap. It’s very bad form to steal another dancer’s zebeikiko and according to a Greek article I recently read, titled “The 32 rules for dancing zebeikiko,” you’re better off sitting this one out.

Guests tend to leave in dribs and drabs over the course of the night. Only the relatives of the couple are expected to stay right to the end, though chances are, you’ll be having such a good time you’ll want to stay as long as you can. When it’s time to leave, greet the couple and their parents and head off with a host of happy memories and maybe some ideas for planning your own Greek wedding. Kai sta dika sas, you crazy kids!