Greek Firewater at the Source

November is the month for distilling grape-based tsipouro and the villages of northern Greece are the best place to enjoy it.

It’s a Friday night, just hours after our arrival in the Pieria region. The weather is chilly and the darkness of the night is far more pleasing than the afternoon’s depressing twilight.

We are in the village Skotina in the Pieria prefecture, northern Greece, located in the southern part of the country’s Macedonian region, and have taken a seat in the yard of the Polyhros family home. We are nibbling on olives and bread dipped in green olive oil.

In no time at all, the housewife approaches and wipes away the table top in one move, not with a standard disinfectant, but instead with tsipouro.

The spirit’s high concentration of alcohol makes it an ideal natural cleaning alternative, highlighting how alive multiple applications of local products remain as a practice in Greece’s rural regions. This “disinfectant” used by Mrs. Polyhrou is precisely why we have made this autumn trip to the Pieria region.

So, then, what exactly is tsipouro, you may ask.

It is a strong distilled spirit, similar to Italy’s grappa or arak in the Middle East, which is produced in various Greek regions (Macedonia, Epirus, Thessalia, as well as Crete, where it is known as tsikoudia), usually between October and December.

The spirit is made with the pomace, or grape residue – peel, pips and must – from the wine press. It is produced in copper stills, locally known as “rakokazana“. The pomace, along with water, is placed inside these containers and boiled to produce this clear distilled spirit, drop by drop.

Depending on the custom of each regions as well as the patience and intent of each kazanari, the producer at the helm, the tsipouro is single, double or triple-distilled.

Tsipouro is wine’s smaller but stronger little sibling. It possesses a far more aggressive taste and greater alcohol content (between 36 and 45%), which is why it is drunk in shot glasses, accompanied by small and assorted meze dishes.

Food was an integral part of the production ritual at all the rakokazana we visited in Pieria. There are many of these stills, as tsipouro is a way of life in the region. The various foods consumed included white goat milk cheese, olives (brown, black, small or big), pie with greens (hortopita filled with spinach, nettle and other wild greens), cheese pie (tyropita), lamb and goat dishes, as well as a fantastic firiki apple (small and sweet) preserve in syrup topped with a walnut.

The culinary delights we tried – seated next to the distillation tanks, alongside the local producers, who were complete strangers to us just days earlier – while waiting patiently for the tsipouro to drip, were incredible.

The essence of this experience is represented by the eating, drinking and the socializing with familiar and unfamiliar faces by the boiling tanks as we waited for the pulp of grape peel, pips and must to be transformed into a fine spirit that will keep us company throughout the winter. 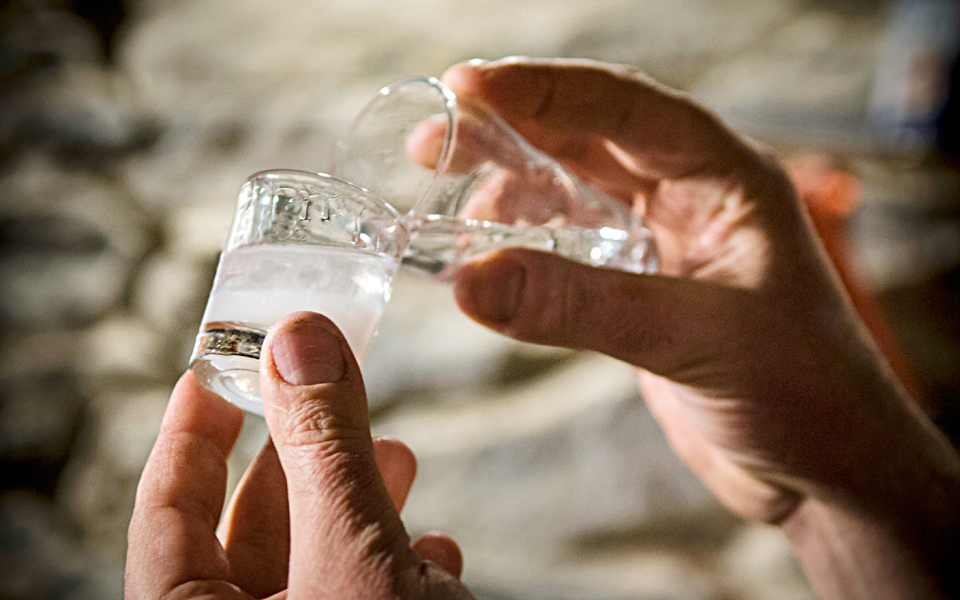 As may be gathered, our trip involved lots of drinking. However, excesses aside, the thing I liked most about this excursion to the various distillation tanks around Pieria was the opportunity it provided me to become acquainted with the people, their homes and the unique details of their everyday lives.

There was the young son of Mr. Antonis Katsamagas at the village Rahi, who fed wood into the tank’s fire as his grandfather looked on.

The cats that wondered about the yard at the Hatzis winery close to the village Neos Pantaleimonas who looked completely at home alongside the men by the tanks; and the wild boar pelt hanging on the wall at the winery operated by Mr. Korovesis in the village of Ritini that gave the space the look of a Norwegian hunter’s shack.

The trip also included interesting discussions about other tsipouro varieties, such as a cranberry-based version –, a yellowish spicy tsipouro made with touches of Kozani saffron – and tsipouro aged in oak barrels, which initially causes a burning sensation to the throat, before gradually providing a soothing warmth to the entire body.