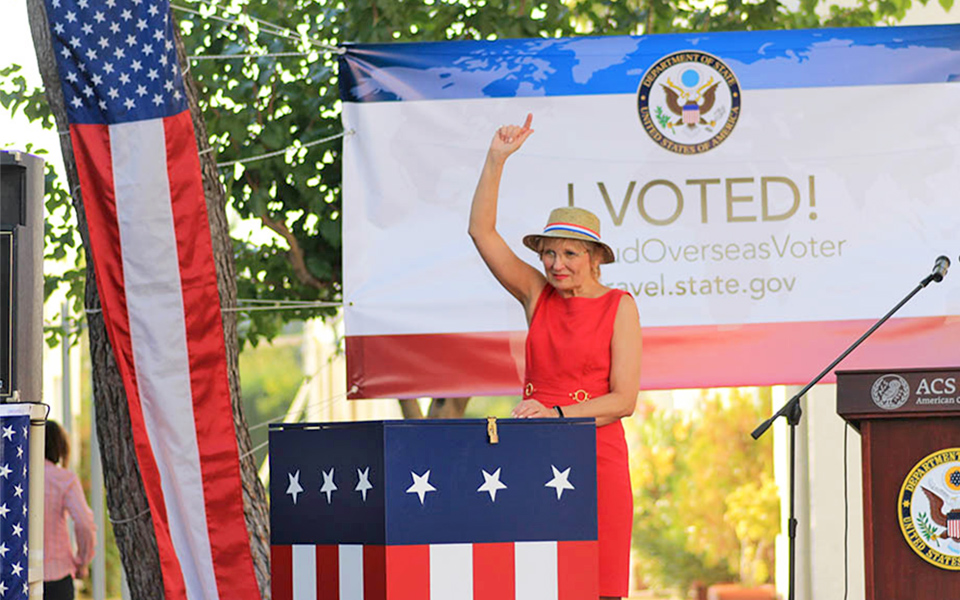 Picking the Brains of Americans in Athens

On what they love (or hate) about life in Greece and, of course, the US elections

American elections are always a global event, but this year more so than ever. Americans living in Athens are watching with particular interest. In making Greece home, they’ve lived through anti-American sentiment, learned to love loukoumades as much as donuts, and eat their pumpkin pie savory instead of sweet.

They’ve left their mark. There’s the private American Community School established in 1946, a sprawling space in Halandri, which could as easily be in California.

In Kolonaki, you’ll find the Hellenic American Union, established in 1957, which is home to regular events, educational programs and debates, while in Pangrati, there’s the Athens Center, running since 1969, where you can enjoy culture, Greek lessons and more.

Yes, IKEA. Several Americans I spoke to said they go there when homesick, because “IKEA looks the same everywhere!”

The Americans in Athens have been furiously preparing for November 8. Now when I speak to them, they’re in the eye of the storm, as they wait for what comes next.

“I feel I won the lottery!”

Marty Eisenstein is a guitar teacher from Boston who has been living in Athens since 1993 after following his wife here. He’s been teaching music lessons at Campion for 23 years now, and has a daughter. Marty is a rare breed, not just because he’s Jewish.

“There aren’t that many American guys here!” he says with a laugh. His memories of Greece are mostly positive have, but he does remember one moment of anti American sentiment in particular. “The lowest moment in my 23 years was during the bombing of Serbia. My local bakery owner turned to me and said ‘We’re not the same, Greeks and Americans.’ That really upset me.” Marty doesn’t think the elections will change his life too much.

Whatever happens, he’ll still be here, teaching guitar the next day. “I love the place in a lot of ways. If you think what Greeks have been through economically and politically, anywhere else, people would have taken guns on the streets already. That didn’t happen. To me that’s an amazing thing. And now that my daughter is going to university for free, as an American I feel I won the lottery!” 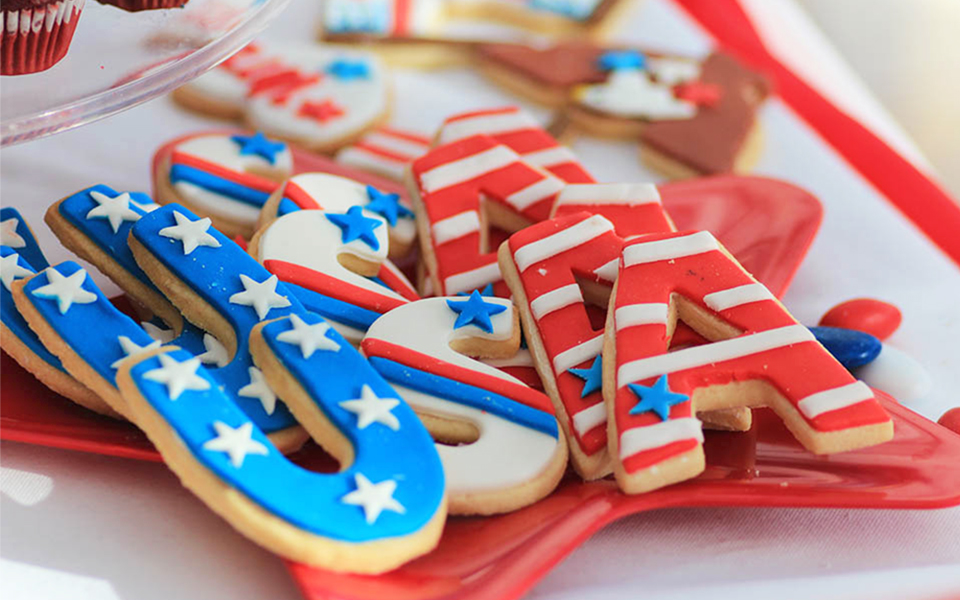 Stacey Harris-Papaioanou moved from Chicago to Greece in 1985 and divides her time between the glamorous island of Mykonos and Athens.

“The summer romance with my ex was the catalyst for moving here, but my real love was Greece,” she says. Stacey has two children and is an active member of Democrats Abroad. “Everyone is saying ‘Whatever you do, vote’, and a huge percentage has already taken part in early voting and absentee voting.” She experienced anti-American sentiments during 9/11, and now when Greeks ask her about Trump. “Trump, there’s a Greek word that describes him perfectly. He’s a faflatas (someone who talks a lot but does little)! ” she says.

As election night nears, Stacey says Americans have gone quiet. “People avoid talking so as not to fight, unlike the Greeks who are very passionate and don’t mind telling their opinion to anyone. Americans are a bit more reticent in that respect.”

When she wants to get a flavor of America, she goes to the usual places one might suspect – the Hard Rock Cafe in Monastiraki, TGI Friday’s in Kolonaki and Applebee’s when it was still open. “Or coffee with members of the American Women of Greece, of which I’m a member. We talk about home, where to find ingredients. We made tacos from scratch when I first came here, now you can just buy them in the supermarket! It’s so much easier for the new girls! ”

Christine Jackson moved with her Greek husband to Athens in 1972, right in the middle of the Junta.

“I was working at Deree College when the Polytechneio events took place. Colleagues heard the tanks go by,” she says. That event is why she has refused to acquire Greek citizenship. “During the Cyprus crisis I was called a spy! I was on the street and my accent must have been wrong. ” she says.

After working at the Deree College – “which I discovered wasn’t actually American, ” she worked for the next few decades at the Fulbright Commission, advising Greek students without scholarships on studying abroad. “It’s an addictive job. I still do it. ”

She enjoys going to the Athens Centre in Pangrati for cultural events and poetry readings and has met and befriended other Americans there over the years. A fellow American she greatly admires is the former ambassador to Greece, Brady Kiesling, who resigned in protest after America’s invasion of Iraq in 2003, becoming the first of three US Foreign Service officers to do so.

Christine worries about what these elections say about America. “You can love your country and see that it needs improvements. Greeks certainly do that with their country. Patriotism is hollow if it doesn’t embrace the fact that you want the country that you love to be its best self not its worst self,” she says. 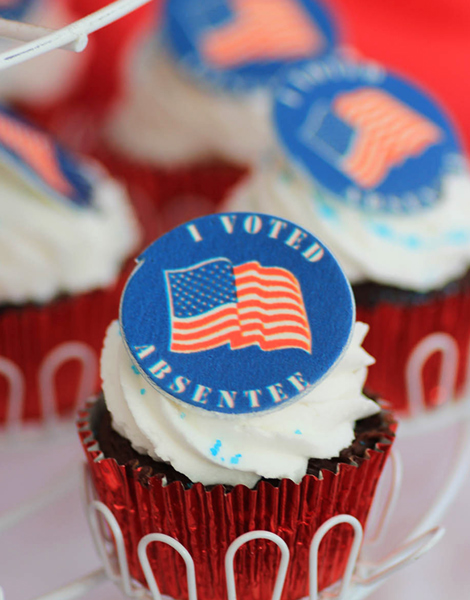 “If you can’t beat them, join them”

Anna Goritsa came to Athens nearly 20 years ago to marry her Greek husband. She has two sons who attend Greek schools. As an event travel consultant, she works with US companies based in Greece, so she’s around other Americans frequently. Back in 1997, Anna says she couldn’t find good-quality deodorant in Greece and so would have family and visitors bring stocks from the US for her!

“I’m very concerned. I believe that many US citizens will not exercise their right to vote,” she says. “When I watch the elections with fellow Americans in Greece, it’s more fun because we know why we’re arguing. And yes, we try to avoid prickly topics because we respect each other. When watching with my Greek friends who have never lived or been to the US, we argue for the sake of arguing,” she says.

As for anti-American sentiment, that changed with Greece’s economic crisis. “Greeks are experiencing anti-Greek sentiments and have realized that the citizens of a country should not be judged for the policies of one’s government.” Anna worries about whether the new generation of Americans will stick around in Athens. “Their potential and options are so limited and many are moving.” But still, if you’re thinking of moving here, this is Anna’s advice: “The number one survival quote when you move anywhere is ‘if you can’t beat them, join them.’”

Nick Barnets, a freelance journalist, has been coming to Greece all his life. He spent his summers in a village in Halkidiki but moved to Athens full time in 2014 for his career.

This is the first time he’s watched the American elections from Greece. Nick says his Greek friends are terrified of Trump becoming president and disappointed that Clinton is his opponent. “I can’t wait till it’s over. On the one hand I am always excited, but also I want this particular election to just be over so we can move on. ” As one of the new generation, Nick stays connected with other Americans through social media. “But I do feel like I’m right back in the US whenever I’m at The Mall. It really feels more America than Greece there. ”

My final American is tall and stoic, clutching a scroll in one hand and staring quietly at the traffic and offices opposite him.

He doesn’t say a word to me, but I don’t mind. You see, he’s a statue; the statue of President Truman, to be precise.

This rendition of the 33rd American president, a known philhellene, is a lightning rod for anti-American sentiment. Since it was erected in 1963, it’s been rammed with a car, bombed, toppled over and splashed with paint.

On this day, Mr Truman is looking pretty good, but a closer inspection reveals little specks of red paint clinging to the bronze and larger splashes on the surrounding ground.

In an election campaign where both sides paraded childish statues of each other, at least this statue of an American leader retains some dignity, even when he’s brightly decorated with pink and red paint. It could be worse. He could be a statue of Donald Trump.