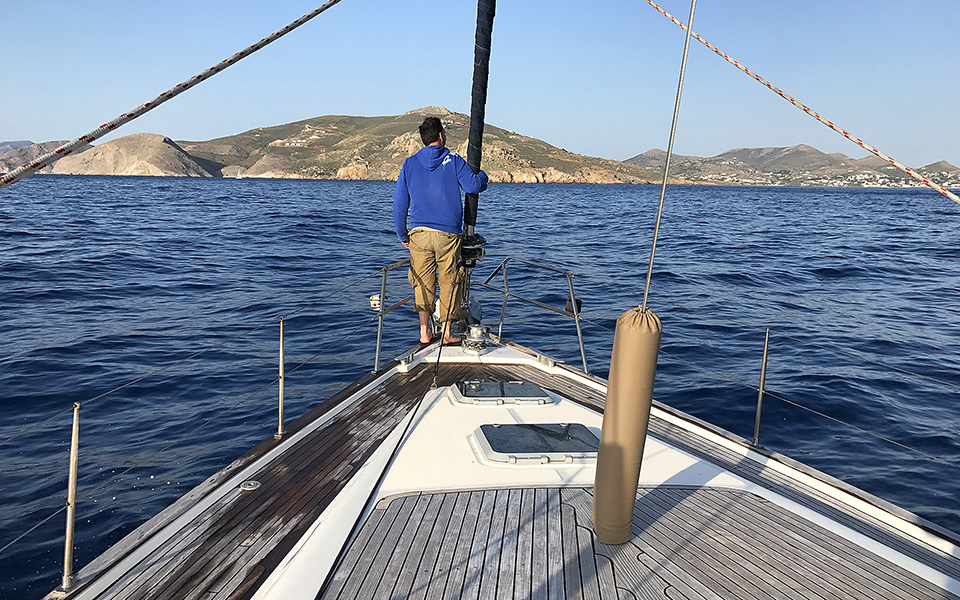 The Exciting Adventures of a Novice Sailor in the Aegean: Days 3 & 4

If you haven’t already, click here to read the first instalment.

After a power breakfast on board – Greek yogurt with oats and a large sticky dollop of honey – it was time to set out on our morning hike. Luckily it was only to be a three-hour affair up to the castle of Oria on the northern tip of Kythnos.

Rambling up an old kalderimi (pathway) whose dry stone walls rose as high as two meters at points, Stavros, our guide, seemed to be obsessed with the varieties of thistle, a nibble favored by donkeys. Apparently they are a much overlooked plant and when they bloom have a bright purple crown protected by a multitude of thorns and spikes.

Donkeys, we did not come across today, but we did pass a small flock of sheep being milked by a lady with the help of her burly son and playful dog Daisy. After the cordial exchange of pleasantries she asked whether anyone would like to have a try at milking. Once again audacious Fanni volunteered for the task and duly squirted a few shots of milk that clanked into the metal bucket. The milk would be taken back to the farm, boiled and curdled into feta cheese. 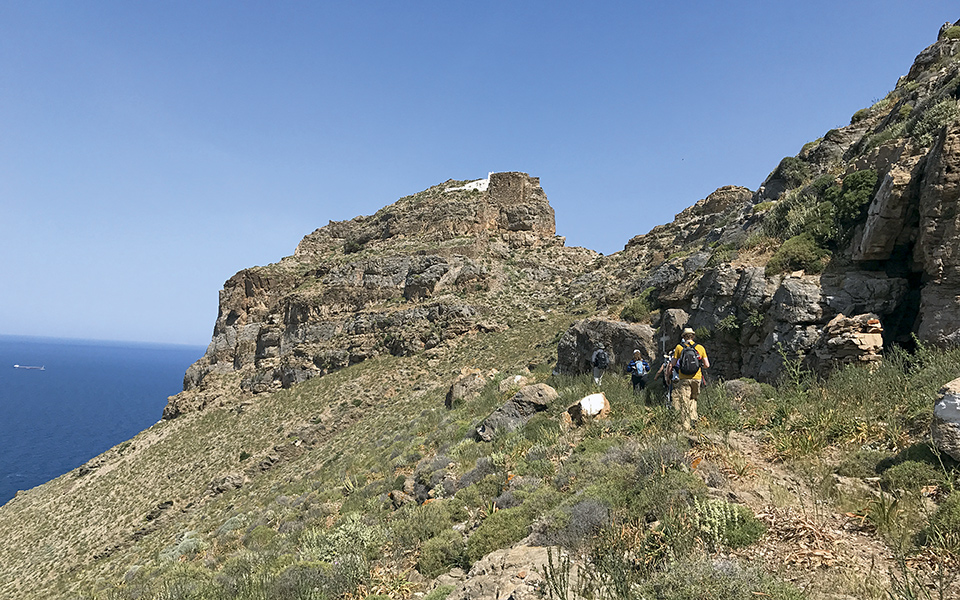 Our destination, the remains of Oria Castle was a sight to behold; there stood a hilltop fort with sheer cliffs dropping into the sea and a recorded history spanning back nearly 3,000 years.

The entrance, still somewhat intact, had embrasures above the gateway and a few steps up from there was the church of Agia Elousa, built atop earlier places of worship. Beyond were the rubbly ruins of all the buildings on the old castle, laid low by centuries of turmoil and war.

As I sit here at the skipper’s chart-desk below deck to blog about our morning adventure we are setting sail for Syros. As we pick up speed and the sailboat leans left and I wedge my right foot up against the solid bannister of the steps that lead to the deck. In actuality were it not for the hull I would be chest high in sea water as I am partially under the water line, quite a bizarre thought as we slice through the fizzing blue waters, rocking and rolling a bit too much for my liking. Also I’m getting a little dizzy down here so I’m going up to enjoy the thrill of sailing in the windy sunshine of the deck.

As I emerge, a little pale and disoriented, Giorgos, the skipper waves me to the aft of the boat. “If you’re feeling dizzy, it’s best for you to take the helm!” he says. Before I know it I’m behind one of the two giant steering wheels (close to a meter in diameter) and told to head for a small white dot (the sail of a boat) on the horizon in front of me. Within a minute my dizziness has dispelled and I’m right as rain again.

Having paid attention to Fanni’s tutorial yesterday, I was doing a fabulous job, small adjustments to the left then to the right, even managing to confidently crack a couple of jokes with some of my shipmates. “Adrian! Where’s the point that I asked you to keep sailing toward?!” Giorgos interjected. ‘It’s…erm,’ I scanned the horizon again, what I thought was dead ahead was now way over to my right. “Oh, hum, it’s over there.” I answered sheepishly. The skipper nodded and smiled as I changed course. 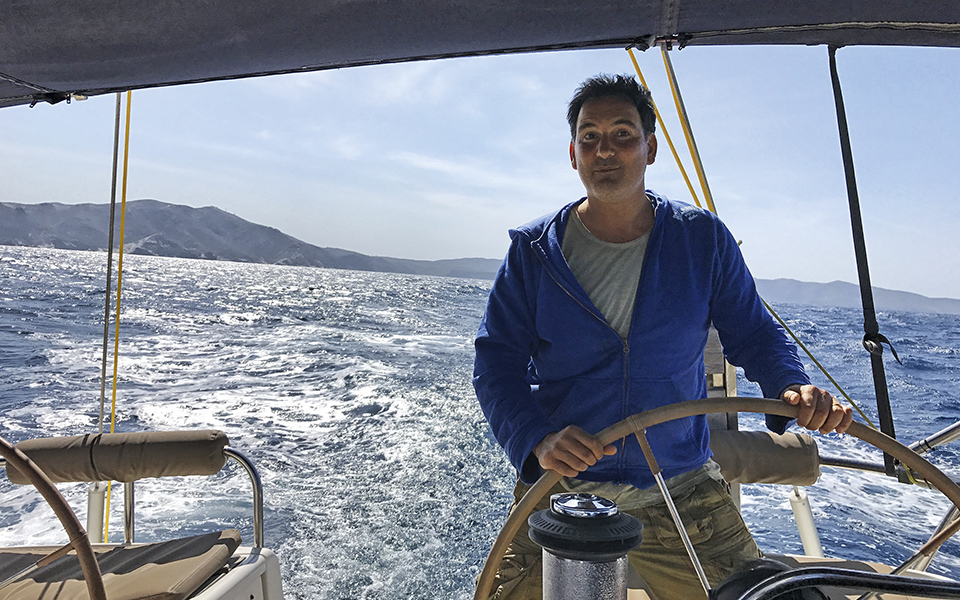 As I got back on course, the wind blowing on my face intensified as we picked up speed. This is the apparent wind speed, which is the actual wind speed plus the speed of the boat. Clipping along at 9.5 knots with the ‘apparent’ wind speed of 24 knots, I was helming a sail boat on the gorgeous blue waters of the Aegean – always a dream of mine! I felt like a true sailor now, a hardened sea dog. I was closing in on the once white dot, that was transforming into a three sailed sloop.

“I’ll catch up with it soon and we’ll pass it,” I proudly announced to everyone.  “Yes well, they are actually coming towards us…!” Giorgos informed me, inciting everyone to have a little chuckle at my expense, my pride rightly deflated.

Our four-hour crossing had reached its end, and we pulled into the protected little harbor of Finikas on Syros, yet another island to discover.

Hungrily we hopped off board and traipsed down the harbor to the sea front taverna ‘Calmo Mare’, where for dinner I devoured the house specialty of the herby smoked Syros sausage on a bed of freshly-cut fries and topped with a fried egg, all washed down with a couple of glass of local red wine. The sailing was great, but I quite look forward to this break from the sea.

We set off on a more leisurely hike, today at the more civilized hour of 9.30. The sun was already blazing, and it felt like summer had kicked in properly here on Syros. We followed the road that passes through elegant Poseidonia (filled with grand mansions once used by wealthy merchants from Ermoupolis as summer abodes) as far as Komiti beach before venturing onto a barely discernible goat track.

The hilly landscape was strewn with rather unfriendly thorny green-grey domed bushes of broom, burnet and Greek spiny spurge, typical of the Cyclades. These were interspersed with explosions of colour; the white and gold of crown daisies, the dusky pink of flowering bindweeds and wild leaks, and the purple and violet of the tiny flowers of thyme, summer savory and French lavender. My Finnish friends remarked on how lucky we are in Greece to have all these marvelous herbs growing in abundance everywhere. 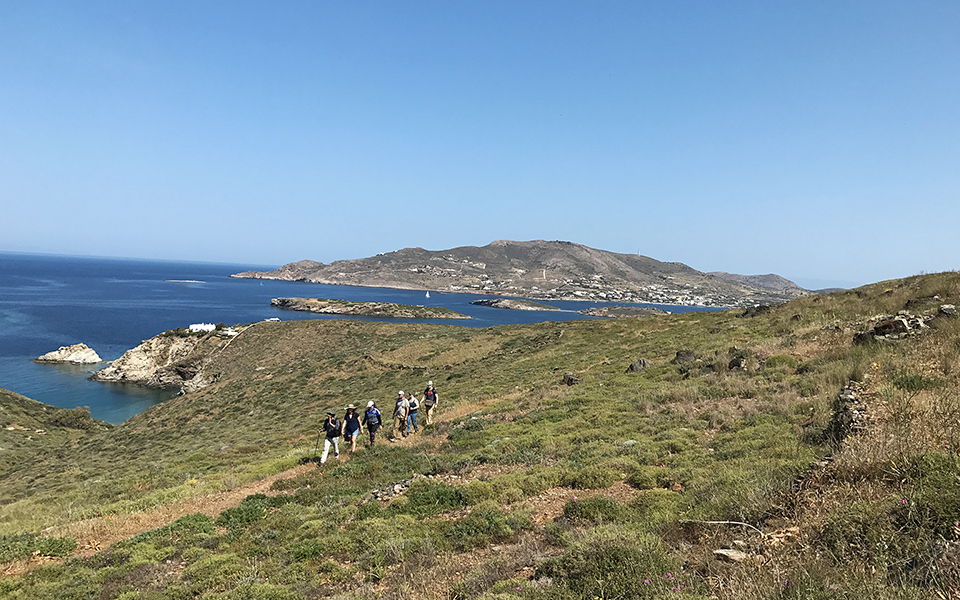 We worked our way to the southwestern most point of the island, Viglostasi, to a spot that felt like the absolute heart of the Cyclades. From here islands to the south (Mykonos, Paros, Naxos), west (Sifnos, Serifos) and north (Kythnos and Kea) are all visible, with the top of Tinos peaking over the hills in the east.

At the tip of the peninsula is a functioning old white metal lighthouse, probably a remnant of WWII, and the remains of a cylindrical tower, that may have been the old pre-war lighthouse. My archaeological instincts (I was a keen archaeologist in my 20s) told me that this place must have been inhabited for millennia, because a panoramic vista is something that would have been quite attractive to peoples of the past. However aside from the relatively modern (I figure 200-year-old) rubbly remains, there was little obvious evidence of this. 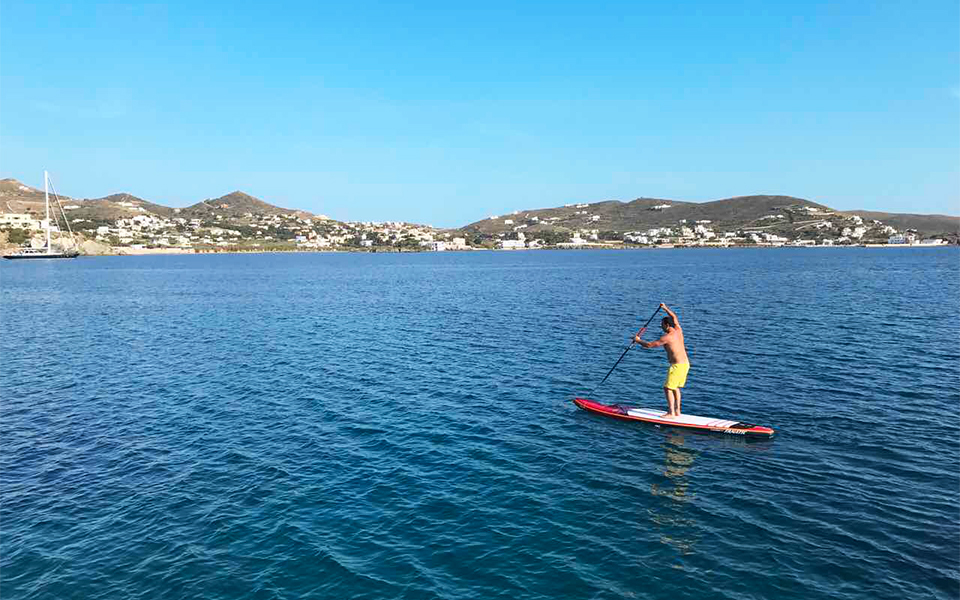 After a leisurely lunch on board I decided try my luck at stand up paddleboarding (SUP), something that has intrigued me for a while, mostly because I never quite saw the point of it! It’s a combination of kayaking and surfing – the board is large, maybe two and a half to three meters long and half a meter wide, and the single oar stands a little over two meters tall.

I hesitantly transferred myself from boat to wobbly board on all fours trying for all I was worth not to tumble into the water. It wasn’t the cold sea I feared – I have already relished a handful of long, refreshing swims on this trip – it was more about saving what was left of my tenuous macho reputation, already quite battered after my bungled attempts as a helmsman yesterday. Eventually I did manage to get up and start paddling, but it’s actually all quite tricky as the board bobbles aggressively under your weight.

And the point of SUP? It’s actually lots of fun once you get the hang of it and can glide over the water, and it’s also quite the work out.

Off to Ermoupoli the capital of Syros and, indeed, all of the Cyclades. After narrowly missed the bus, a local gentleman in a car slowed down and nodded in the general direction of capital, so I gave a thumbs up and jumped in when he stopped. On the drive he gave me a quick history of Ermoupoli, telling me that it was once the biggest port in the Aegean, and that one of the first electric cars (the Enfield 8000) was once manufactured here. The mayor died suddenly of a heart attack moments after proudly announcing the name of the city (after Hermes the god of merchants) after the Greece won its independence. And much more. Judging by the magnificent town hall and many impressive neoclassical buildings, the city was a thriving centre not too long ago. 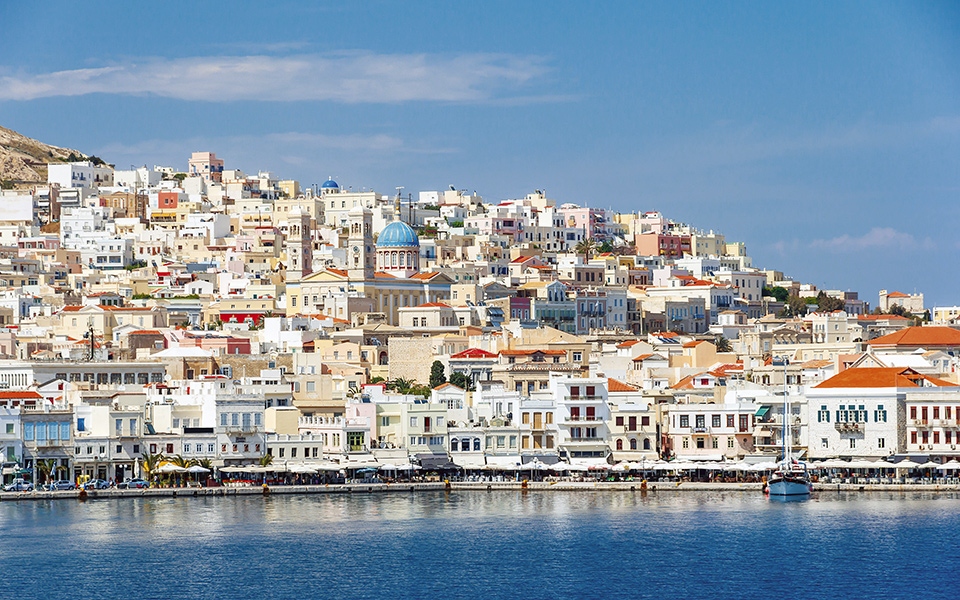 It is still the cultural hub of the Cyclades with beautiful medieval and neoclassical architecture and its own “La Piccola Scala” opera house (the Apollon Theater) where the annual Festival of the Aegean takes place. There is also a university here meaning students live in Ermoupoli year round, adding to the vibrancy of the place.

What I Learned Today: How to Keep Your Captain Happy

The captain is Queen/King so one must always listen to her/him. Never step on the hatches!

When going to the front of the boat always go from the windward side (the side that the wind blows against the boat). You’re less likely to fall in the drink.

When working with ropes on the winch keep your hands a safe distance from said winch.

On board use boat shoes (light coloured soles, good grip, and fast drying material) or your bare feet.

Always have a plan, but also a plan B. Don’t disturb the captain when docking.