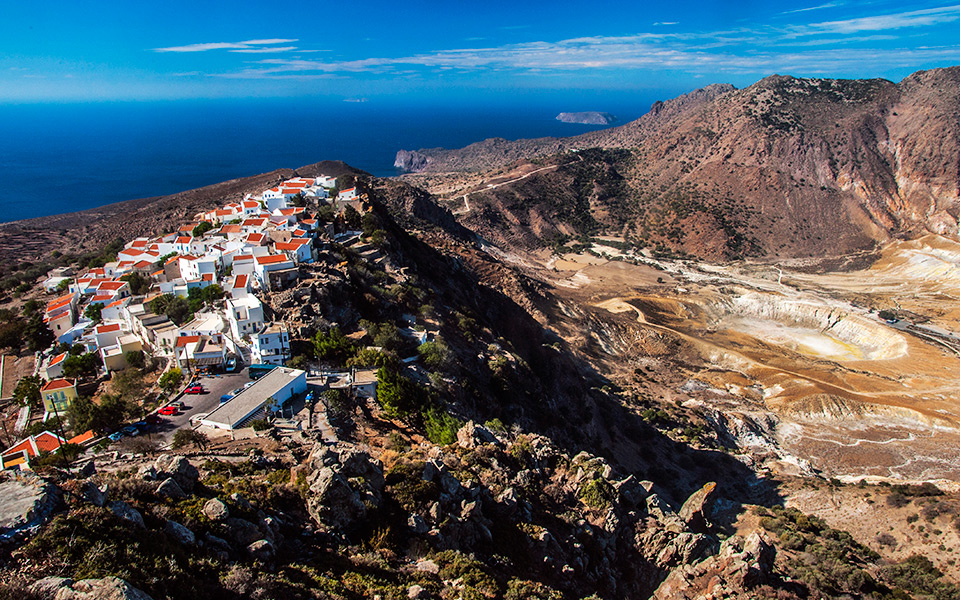 From natural hot springs to ancient fortresses seemingly built by giants, there are countless reasons to keep coming back to Nisyros.

1.  The volcano. Yes. A real volcano. This is what gives Nisyros an incredible energy that makes you feel as if you’re on a different planet. The whole island is actually a volcano, but you can descend into its crater. Smell the sulfur, feel the heat and be awestruck by of the beauty that surrounds you. When you emerge, cool down in the shade and have a coffee at the café. Ask someone to tell you the myth of the giant Polyvotis and his fight with Poseidon, who imprisoned him under the earth where he hisses and rumbles – but for now, thankfully, does not erupt.

2. The natural sauna at the entrance of Emporios village – another way to experience the intense volcanic activity. Or, if you had enough heat, head into what seems like a deserted village and explore the beauty and contrast of the ruins alongside the villas. Be sure to eat at the local tavernas. Take in breathtaking views and/or a shot of ouzo or tsipouro with your meal.

3. Hohlaki beach. We can’t boast about our sandy beaches because we have lots of rocks! But nothing compares to the sound of big, blue-black volcanic pebbles rolling down the shore as the waves retreat. You can meditate to the sound. It’s therapeutic. It’s soothing. Plus, the sea is crystal clear. Be sure to bring water shoes if your feet are sensitive, and plenty of sunscreen. Shade is limited.

4. Gyali, a nearby islet, boasts the prettiest beaches, although it has huge quantities of pumice deposits and obsidian lava. Should your tour go on to the next islet of Aghios Antonios, you’ll really be in heaven. If you get lucky, you might even hitch a ride from a local who is headed over there to fish. Enjoy diving off the boat! 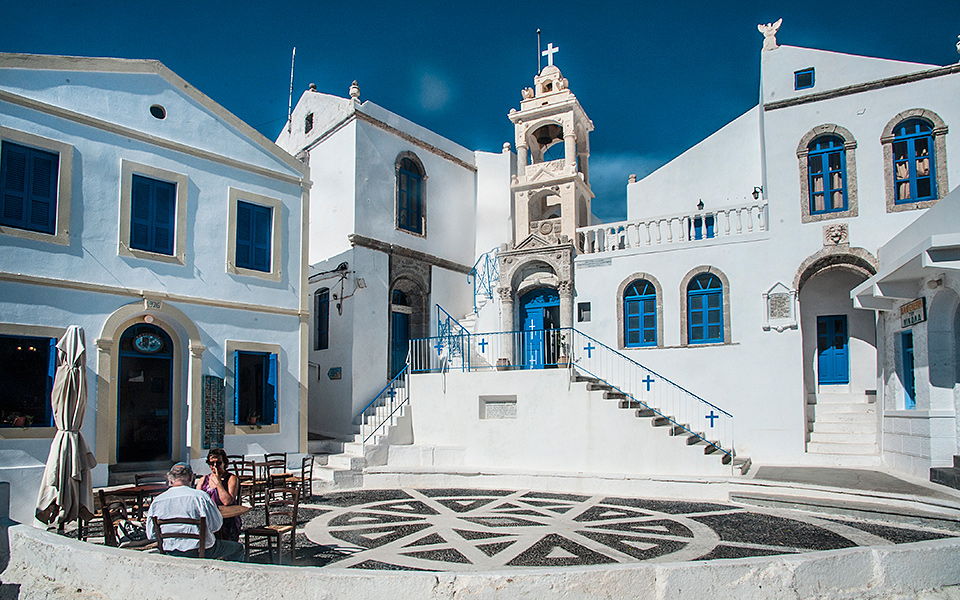 5. The “round” Porta Square of the sweet village of Nikia. Enjoy a homemade soumada, a sweet, non-alcoholic almond drink, on ice, while taking in the amazing views of the Aegean. Then get lost in the winding cobblestone paths of the village and admire the architecture. As you exit the village, make sure to look up at the pristine white church of Profitis Ilias which appears suspended in the sky.

6. The Dorian-built fortress known as the Paleokastro, a kind of “Egyptian-pyramid” wonder – how on earth did the people lift and place those gigantic stone blocks? Beyond marveling at its creation, I strongly suggest you bring a coffee here and watch the sunset, or visit when there is a full moon and have a philosophical conversation with one of the older locals. Sometimes the moon is so big and so close, you feel as if you could reach out and touch it! 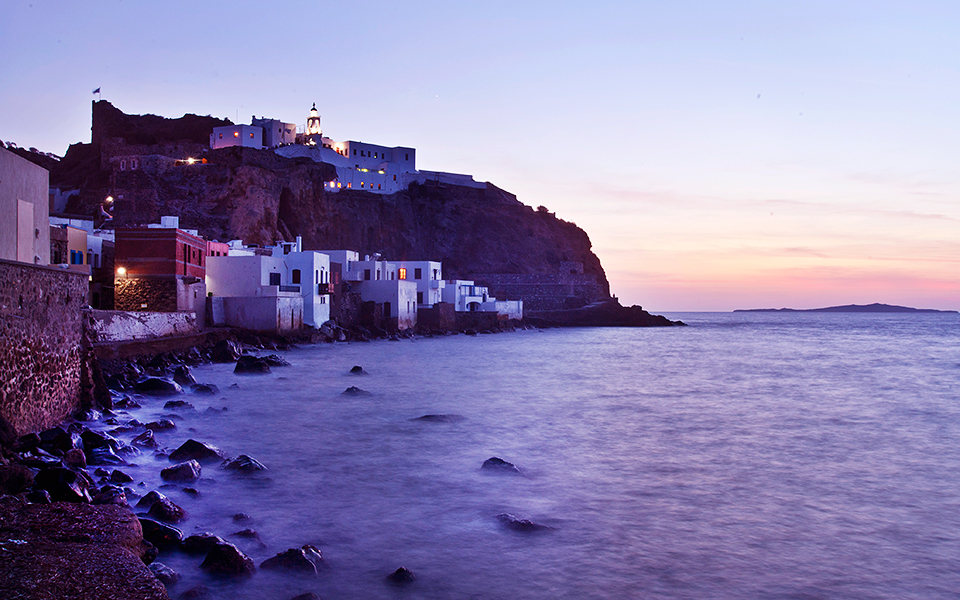 7. Rent a bike and ride down the lanes of Mandraki. Keep a lookout for the unique pebble mosaics in the sidewalks, all created by a local craftsman. If you’re adventurous, bike to the fishing village of Paloi. Swim at the beach and eat fresh fish at any of the tavernas while taking in the pretty view of the harbor.

8. The Panaghia Spiliani Monastery (Virgin of the Caves), the protectress of the island. It’s located in a cave on the side of a mountain, so there are a lot of steps to climb so be sure to visit at a time when the sun isn’t at its hottest. If you’re there in mid-August, listen for boat horns blowing on the 14th as they arrive (around 10am) and as they depart on the 15th (around 3pm). They are bringing the faithful to Nisyros to venerate the monastery’s icon in honor of the feast of the Dormition. On both evenings, be sure to head to the annual celebrations above Ilikiomeni Square. Traditional food, music and dancing will keep you out till dawn.

9. Speaking of dawn, a night out is not complete without a visit to the bakery in Mandraki. It opens just around 2am and you can enjoy fresh-out-of-the-oven goodies before bedtime. There are several fun bars and cafés where you can drink with the locals. There are no distinctions between local and tourist joints on Nisyros, which can lead to unforgettable memories and lifelong friends.

10. If you spend enough time there, you might just fall in love for real with a local or a fellow tourist, and the magic is enhanced. And then you’re hooked. I wish that for you.

ABOUT THE AUTHOR
Anthoula Katsimatides is a New York-based actress, producer and writer. Her one-person show, What Will People Think?, won best autobiographical script in the 2014 United Solo Festival and sold out five shows in 2015.