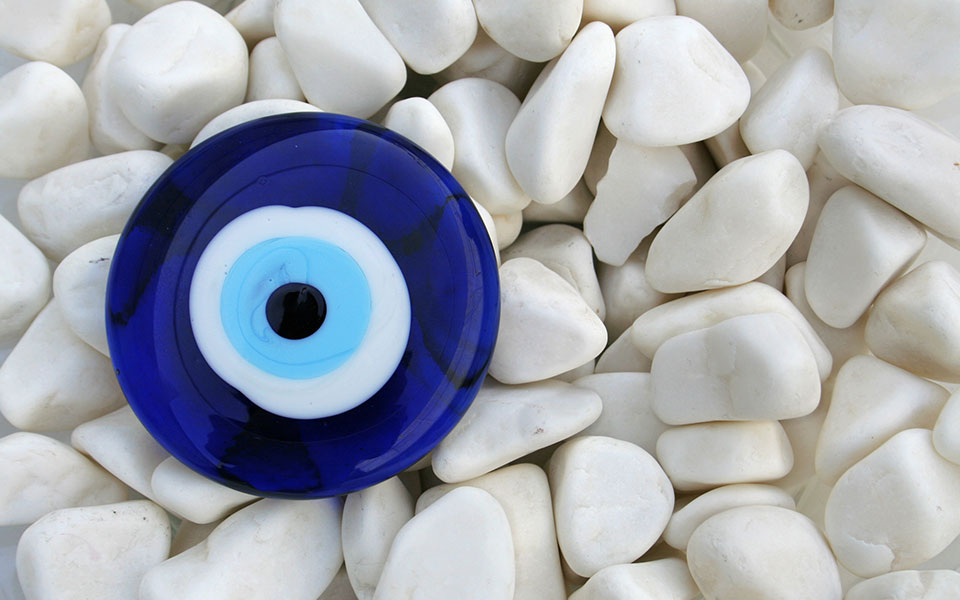 Xematiasma: Getting Rid of the Evil Eye

So many accounts of cultural interactions between non-Mediterraneans and Greeks include a most curious episode: the protagonist is ‘spat’ on. There’s not any actual spitting, but there is an unmistakable, mock-spitting gesture, with an utterance to mimic the sound: “Ptou sou, ptou sou”.

What can be the meaning of this?

The gesture – almost a tiny ritual, often accompanied by a hasty sign of the cross – causes confusion. But it almost never causes offense. The people are smiling. And, if you don’t understand Greek, you’ll still sense nothing but warmth, and even evident admiration, as they perform the mysterious act. That is exactly why they are doing it – the admiration; admiration could have its evil twin – envy – at its root. And envy brings the evil eye.

So the spitting is a great compliment – an expression of admiration with an open, unjealous heart, and unreserved good will. Admiration (potentially masking envy) could – intentionally or unwittingly – cast a spell. The spitting is a sort of counter – spell, a precautionary measure. “Ptou sou na min se matiaso” Greeks will say, usually after paying you a compliment. “I’ll spit on you so I don’t put the evil eye on you.”

It works like this: a person can see something, and admire it – the rosebush of a neighbor, for example. Who knows what truly lurks in his heart though? It could be unknown even to himself (“The human soul is an abyss…” as they say here). He might, for instance, wish his own roses were as nice as his neighbor’s – at any cost. The neighbor’s rose bush is then struck by blight. The thing is, he doesn’t even have to say it, or even (consciously) want it. This is where talismans and spells come in – to guard against an unseen danger, detectable sometimes only in its effect.

An eye charm, meant to deflect the evil eye, is a popular defense. Babies commonly have them pinned to their blankets; wall charms protect households. They are blue, or sometimes green – as people with light colored eyes (less common throughout the Mediterranean) are thought more likely to bestow the curse.

Prevention – the spitting, the eye charms – is one thing. But what about a cure?

Symptoms of being ‘matiasmenos’ or afflicted by the evil eye include repeated yawning, headaches and a general feeling of fogginess. Photo: Shutterstock

The evil eye is called the “mati” in Greek (a “xe” prefix is like “de-” or “un-”; xematiasma means roughly “an undoing of the eye”). There are several ways to perform a xematiasma. My mother in law’s is a simple one, using water and oil.

I visit her if I have a headache. Sometimes she’ll make a coffee – they say caffeine is good for headaches. But other times she’ll take a look at me and say, very matter-of-factly: “Ah. That’ll be the evil eye”. There’s no drama or mystery. She doesn’t put on a turban, or anything like that. In fact, she doesn’t even shut off the tv. She gets out a glass – usually a champagne glass, the shallow, old fashioned “coupe” kind so there’s a lot of surface area – and fills it with tap water. Then, from under the sink, she takes the 1.5 liter recycled Fanta bottle of olive oil from her village in Crete, and fills a teaspoon with it.

I sit, and she sits or stands next to me, making the sign of the cross with the spoon full of oil over the glass, while saying a barely audible incantation under her breath. I can’t make out the words of the incantation, and she takes care I don’t. (It’s not a secret, per se. But the “Vaskania” – the xematiasma prayers – need to be handed down criss-crossing the genders – women teach it to men, and men teach it to women. So if I accidentally learned it from her, it wouldn’t work well). Then she traces the sign of the cross with the spoonful of oil next to my temple. I can feel a kind of lightness, like something burdensome is leaving out of that side of my head. We’re almost done now.

The last part of the ritual is sort of a proof. She dips her finger into the oil and lets a drop fall into the water. It spreads over the surface and vanishes. She does it a second time, and then a third. The oil is not pooling. It has spread to form a barely perceptible skin across the surface of the water. I yawn, and she yawns. We both yawn several times more, as though something is being released. This, coupled with the way the oil is behaving, indicate I was under the influence of the evil eye. I take a drop of the oil lightly with my fingertip and spread it on my lips. Then I take three sips from the glass. None of the water, powerful with the strength of the incantation, should be wasted; if I can’t drink it all, I should water the plants with the rest. I drain the glass, just to be safe.

Sometimes, one “xematiasma” isn’t enough. She checks in. A topping up can be done from afar, but I go back for a second one the next day. It might turn out to be unnecessary. But in that case, it provides empirical relief, a visual proof that the evil eye has left. In this case, at the conclusion of the ritual, the drops of oil – rather than spreading to form a sheen – remain pooled into three separate, distinct drops, as oil does when no unseen mischief interferes. It’s a nice sight.