Central Halkidiki at a Glance

Halkidiki offers a unique combination of nature, history and spirituality.

The greenest part of Mount Holomontas is the Taxiarchis Forest, a 5,800-hectare expanse that is supported by the Aristotle University of Thessaloniki.

Polygyros is the administrative center and capital of Halkidiki, and provides all the facilities and services you can expect from a city.

Ouranoupoli is known mainly as the port for boats taking pilgrims and other visitors, all male, to Mount Athos, but it is also a lovely seaside village worth visiting for its beaches and tavernas.

With departures from Ouranoupoli, these boat trips running along the Mount Athos coastline are the only way for women to get a glimpse of the sacred part of the Athos peninsula.

If you’re visiting at any other time than summer, or want to explore traditional life in Halkidiki, visit the villages of Arnea, Varvara and Galatista.

The towns of Ierissos and Nea Roda are great stopovers during an excursion to the east of Halkidiki, which also boasts the islet of Ammouliani, off the village of Trypiti.

Halkidiki is so much more than the three promontories that most people usually associate it with. The center of the famous “three-legged” peninsula is dominated by Mount Holomontas, which is a vast expanse of oaks, madrones, pines and fir trees that draws all sorts of nature lovers, from hikers to families enjoying a bicycle ride and just taking in the fresh air. Arnea, once known as Liarigova, is a small village in the Holomontas foothills renowned for its vernacular architecture, as seen in several well-preserved stone-and-wood structures. Varvara and Galatista, northeast and west of Arnea respectively, are also villages typical of the Halkidiki hinterland, where traditional everyday life is still evident.

In eastern Halkidiki, Nea Roda was built in the 1920s by Greek refugees who named it after their hometown of Roda in Propontis on the Black Sea. Ierissos also has a fascinating maritime history and is renowned for its carpenters and boat yards. Also in the east, you’ll find the lovely islet of Ammouliani and, of course, Ouranoupoli, the port that serves boats heading to Mount Athos. 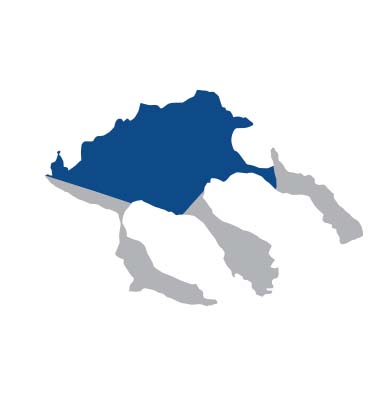 The Vibrance of Halkidiki’s Arnea and Varvara Villages