Sithonia at a Glance

Halkidiki's second peninsula is the link between sophisticated Kassandra and spiritual Mt. Athos

Kavourotrypes, Vourvourou, Sarti, Tristinika, Kalogria and Lagomandra are just a few of the wonderful beaches that form the stunning mosaic of Sithonia’s coastline.

History buffs and visitors looking for an authentic, traditional experience should visit the villages of Parthenonas and Old Nikiti, both offering excellent examples of Macedonian architecture.

Sandy beaches, clear waters, pristine natural surroundings and lush vegetation that sometimes reaches right down to the sea, are but some of the reasons why Sithonia is a favorite among campers.

The historic Porto Carras resort is a landmark of northern Greece; the high-end hotel experience can also be found at Ekies All Senses Resort and the luxurious Danai Beach Resort and Villas.

This is probably Sithonia’s best-known village, popular among locals and tourists alike for its seaside tavernas serving fresh fish platters accompanied by ouzo.

Little jewels of islands dot the coastline of Sithonia, such as Diaporos just off Vourvourou Beach, a great escape from the beach crowd.

Sithonia, the middle outcrop of the Halkidiki peninsula, is the link, or middle ground, between cosmopolitan Kassandra and the monastic retreat of Mount Athos. Its mild climate, pine forests and sandy beaches, as well as its smattering of lovely islets just off the coast, make it particularly popular with nature lovers and outdoorsy types. Located between the Gulf of Mount Athos, or Singitic Gulf, and the Toronean Gulf, Sithonia may have been named after Poseidon’s son, King Sithon.

The Sithones may have been Phrygians from Anatolia who united with a Thracian tribe. In ancient times, several cities grew powerful and prosperous in the region, including Parthenopolis, Toroni and Sarti. Among its many natural attractions, pride of place is held by Mount Itamos (or Dragoudelis), protected under the Natura 2000 network. In modern times, Sithonia (like Halkidiki and northern Greece in general) has been affected by numerous historical events, most notably the expulsion of the Greeks from Asia Minor in Turkey in the 1920s, which led to an influx of refugees who formed new settlements like the village of Neos Marmaras.

Endowed with traditional villages like Parthenonas and Palia Nikiti, beautiful beaches and luxurious resorts, Halkidiki’s second cape, or leg, has a wide variety of attractions that make it an ideal vacation destination. 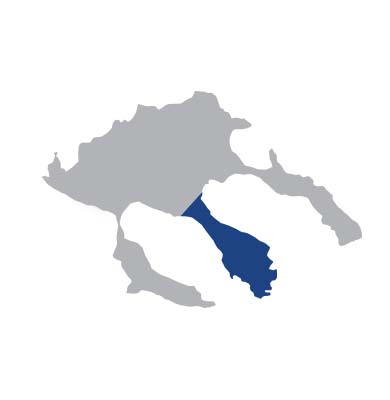 Parthenonas Village: Past and Present