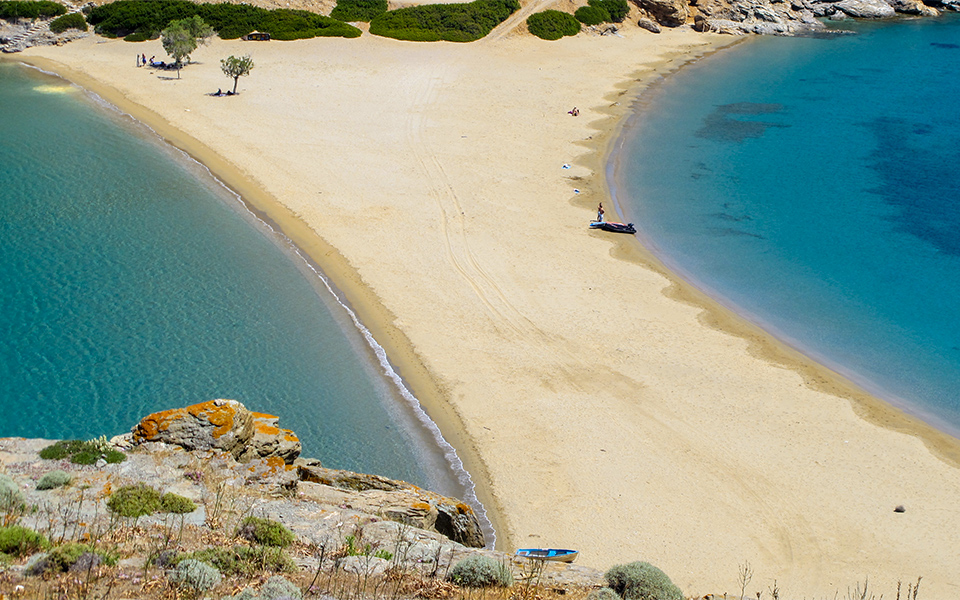 The Exciting Adventures of A Novice Sailor in the Aegean: The Finale

The conclusion of our author’s journey around little-known yet stunning beaches, ruins and hikes in the Cylcades.

“The pessimist complains about the wind; the optimist expects it to change; the realist adjusts the sails.”

(If you’re catching up here are the first and second and third instalments of this series.)

We left Serifos for the penultimate leg of our journey, back to Kythnos, this time to the west of that island. The morning winds were not strong enough yet to fill our sails so we motored out of the harbour northward up the coast. As we approached the northern tip, our encyclopedic guide Stavros animatedly recited the myth of Perseus who was challenged by Polydectes, the king of Serifos, to bring him the head of Medusa – no small task by the sound of things. The legend is peppered with prophesies, heroes, mermaids, mischievous divinities, magical weapons and my favourite, Pegasus, the flying horse. All of this culminates in the founding of the city of Mycenae.

As we listened to the tale with bated breath, the winds suddenly picked up and breathed life into our sails. We breezed across the strait dividing the two islands at a steady six knots SOG (meaning Speed Over Ground, rather ironically – I suppose Speed Over Sea wouldn’t abbreviate too well).

Our destination was Apokrisi, a beautiful bay with a long stretch of cream-colored sand welcoming us back to the shores of Kythnos. 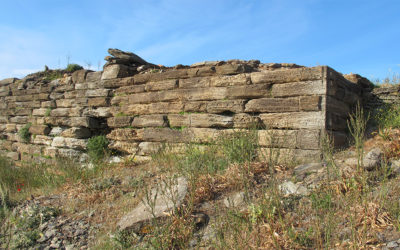 A section of the cyclopean walls at Vriokastro / Credit: Personality Journeys

The Footsteps of the Ancients

Our final and most relaxed hike began here. We set off on a narrow path on the side of a wide, fertile valley, passing goats shading themselves underneath the thick green foliage of fig trees as we wound our way up the side of a large, hilly peninsula. Upon reaching the top, complete with the foundations of what were once magnificent temples, we could see the vast expanse of Vriokastro, the main city-state of Kythnos in the 7th century BC.

The ruins of the settlement stretched down to the sea on all sides of the peninsula and we could see portions of the old cyclopean walls in places. Underfoot the ground was strewn with countless shards of red pottery, and above, in the cyan sky, large birds of prey circled hungrily.

Arriving back to the beach I spotted Giorgos, returning with a bag full of fresh eggs purchased from Mr Spiros, who has a farm in the valley. I was intrigued to learn more about the ancient city, so I approached and started to ask about the ruins. I had to repeat my questions a few times as 93-year-old Mr Spiros‘ hearing is not what it once was. In the ancient settlement’s heyday, he informed me, there may have been as many as 35,000 inhabitants and his grandfather had told him that there were many treasures to be found in the surrounding hills.

In his heyday, Mr Spiros told me, he was a sailor who had travelled the world many times over from the cold northern climes of Hamburg to the balmy equatorial heat of the Orinoco, but nowhere compared to where his feet were deeply rooted now. 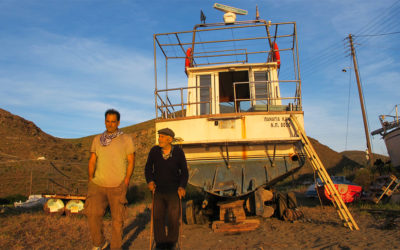 The boat was to moor three bays south at Merihas, the main, but small port of Kythnos. Tavernas, cafes and bars line the seafront, arching round the back of the bay. For dinner we picked ‘Byzantio’ which had tables right on the beach and the compulsory litter of cats hanging around who, quite bizarrely, competed for scraps with a raft of waddling ducks.

The trip was nearing its end, so we all made a beeline for one of the bars after dinner. Now one of the many things that I have enjoyed throughout this adventurous week was that every gorgeous beach we stopped at and on every hike we went on we had the privilege of being practically alone, and it almost seemed as if these islands existed exclusively for us. But the sense of having plenty of space to ourselves didn’t translate that well in a bar: the loud echoing music didn’t lend itself for great banter on the one hand but nor was it very enjoyable to boogie on an empty dance floor. A few of us did manage a few twists and turns splashed by technicolor strobe-lights, although in my case it only served to highlight my pitiful dance moves. But by this point I managed to enjoy one of the most well-known attributes of sailing which comes from people sharing a relatively confined space: the necessity of being accepting of each other!

In the morning the feeling on board was unusually subdued, probably a mixture of finishing late at the bar the night before and a blaring awareness that it was our last day. But the infectious good humor of Captain Giorgos’(a teetotaler), coupled with a fresh breeze and some strong coffee, helped raise our spirits. We sallied out of the bay and off to a beach a mere quarter of an hour away.

Now when I say beach, I am not sure if Kolona is one beach or several. It’s sand bar (a thin strip of sand) that connects Kythnos to the islet of Agios Loukas, and the name Kolona, meaning column, indicates its shape and color with the sea lapping on both sides.  Swimming up to it I felt a little disoriented because when wading out of the sea onto the sands I suddenly saw the sea on the other side only about 15 meters away, something I had never encountered before. Quite stunning – yet another new and awe-inspiring experience I have come across on this trip. Looking up I saw a little egret beat its white wings one last time before it floated gracefully down onto the beach not far from me. 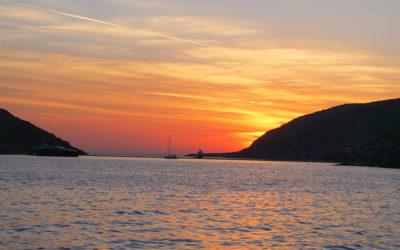 Paradise. I know it’s cliche, but it’s a word that has sprung to mind so many times over the last week along with many others.

There was no hike on our final day, and missing the walk I decided to tramp up to the little white church of Agios Loukas, ringed by a handful of small weathered columns brought from the ancient city of Vriokastro on the other side of the bay. On the way up I spotted a few flakes of glassy black obsidian strewn on the ground amongst the stones and pottery shards.

These flakes looked like debris from knapping, the process by which people in Neolithic times made certain tools and utensils, and the obsidian was probably brought over from the not too distant island of Milos. This was the icing of the cake for me.

Our guide Stavros, not to be left behind, joined me at the church and we admired the view of the sandy column below parting the cobalt waters of the Aegean. On the way back down I showed him the black flakes that seemed to pique his inquisitive nature. Suddenly I stopped and picked up a dirty piece of brown broken glass, “And look at this ancient thing. Do you know what it is?” I enquired with misleading gravitas.

“Is it from a bottle of Amstel beer?” he hesitantly replied.

“Exactly! Modern material culture my friend.” We both laughed and no doubt the same thought flashed in our minds: how an icy cold bottle of beer would go down rather nicely right now. 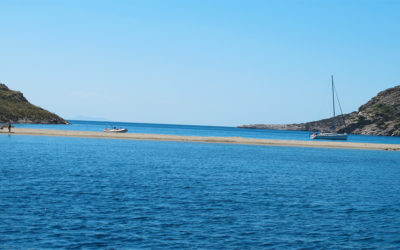 The beach of Kolona from the water / Credit: Personality Journeys

When at Agios Loukas, Stavros pointed out a little cove in the distance, where thermal waters spring out onto its beach. Once back down I grabbed the SUP and unsteadily paddled over. At the right side of the beach was a makeshift pool, with large rocks forming a barrier against the breaking waves. I immersed myself in the hot waters, lying back in a state of nirvana.

After our final lunch on ‘Chez Le Grand Blue’ (an omelet made with the free-range eggs we got the day before from Mr Spiros), we set off for Lavrion. With the strong sea breeze filling our sails we skimmed over the sea, the occasional frothy wave spraying over the bow.

Feeling the cooling wind against my face was exhilarating, and having overcome the jitters of a ‘first timer’ I indulged in every moment of the final crossing homewards. Every tilt, every sway, every lurch, everything. 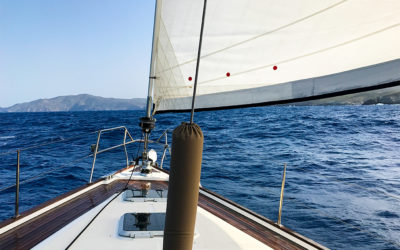 I have to commend the organizers of this sail and hike adventure. It was so thoughtfully planned; the places we visited, the timing of the trip and not least the amazing Personality Journeys team. The expert captain Giorgos, whose almost effortless skill (calmly multitasking all over the boat) and jovial confidence was testimony to his vast seafaring experience (and he’s not a bad singer either).

Stavros our guide, also a qualified captain in his own right, always full of energy and interesting stories and fine details on the hikes, never tired of answering every one of my endless questions.

The great hiking, step by step across the oft rugged and always multifaceted landscape of these dazzling Cycladic islands, coupled with sailing across vast stretches of sea of so many shades of blue is the stuff of dreams, and will leave a lasting impression on me.

There is still so much more for me to discover in Greece.

And I love sailing even more than I imagined. Would I do it again? In a heartbeat. When’s the next trip?