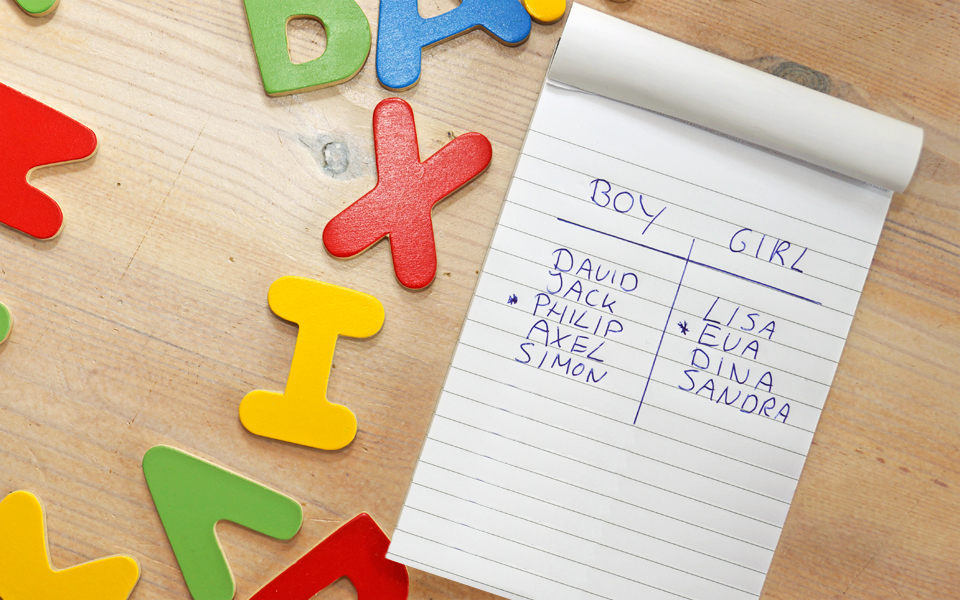 A Greek Name for your Newborn Child

If you’re looking for a baby name beyond the ordinary, why not go with Ancient Greek mythology and history?

In Greece, where we are still quite traditional when it comes to certain things, our parents choose, or, in a way, are forced to bestow upon us the name of our grandparents when we are baptized. It is considered a gesture of respect, honor, and love towards their parents. Traditionally, a boy will get the name of his paternal grandfather, or, if a cousin already beats him to it, he’ll get the name of the paternal grandmother (provided that the female name has a masculine equivalent). Once the paternal side is covered, it’s the maternal side’s turn. The same goes for the  girls.

Those lucky enough could end up with a really nice name, and, if  really lucky, even an original one. But, alas, most of us will wind up with a rather common name, shared by half the population. Parents with a modern outlook or those that simply don’t mind displeasing their parents or their in-laws may opt for a name of their own choice. There’s a whole generation of girls, for example, named Nephele (a cloud nymph in Greek mythology), an absolutely gorgeous name that some nonconformist parent chose at some point, and it became  viral, accidentally.

If you don’t keep similar traditions in your culture and have not yet decided on a name for your newborn or unborn child, you may find some inspiration here. Some of these names may already be familiar, but many people don’t know that they are of Greek origin or that they are connected with some very interesting myths and stories.

1. Daphne was a minor goddess associated with fountains, wells and springs and, according to the myth,  was quite beautiful. Apollo, the God of music, had his eye on her, but she wasn’t quite into him, so when he started chasing her for some…, you know what, she pleaded with her father Peneus, a river God, to save her. Her pleas  were heeded and she was transformed into a laurel tree (in Greek called “daphne”), which became the sacred tree of Apollo.

2. Penelope (or Penny) was the wife of Odysseus, who was off fighting in Troy and then took his time getting back home to Ithaca. Even though she was pursued by many eligible suitors, she remained loyal to Odysseus. She began  weaving a shroud for her father-in-law and told her suitors that it  had to be completed before she would wed another man.  However, she would secretly unravel it during the night. Her name has come to signify a loyal, capable, and clever woman and, according to one theory, it derives from the Greek name “penelops” for a kind of duck that was said to have rescued and nurtured Penelope when she was exposed to die as an infant.

3. Electra was the daughter of King Agamemnon and Queen Clytemnestra, who became quite a tragic heroine after she plotted revenge with her brother Orestes against their mother and stepfather Aegisthus for the murder of their father, Agamemnon. She’s also responsible for the equivalent to the Oedipus complex, the Electra complex, since, from a Freudian point of view, she was in love with her own father and that’s why she avenged his death. Those ancients with their issues…they made Freud famous the world over.

4. Pandora is associated with one of the most beautiful myths in Greek mythology. Zeus was livid because Prometheus had stolen fire from the gods and given it to humanity, so he ordered Hephaestus and Athena to create a woman, Pandora (deriving from the words πᾶν, which means “all” and δῶρον, which means “gift”), who would be endowed with numerous gifts of seduction that would plague humanity for eternity like a deceitful nature and lying. The gods also offered her a large jar that held within it numerous evils, diseases and other pains. One day, out of curiosity, Pandora opened the lid of the jar, releasing all these evils into the world. Shocked by what she had done, she quickly tried to put the lid back on, but only managed to keep Hope boxed in (it’s interesting how hope was considered evil by the gods). This is how the ancient Greeks attributed the existence of evil in the world. Today the expression “to open Pandora’s box” means to do something injurious and with far-reaching consequences.

5. Cassandra (or Cassie) was the daughter of King Priam and Queen Hecuba of Troy. The most common version of her story is connected with Apollo, yet again, who gave her the gift of foretelling the future, just so that he could get her to sleep with him. When, however, she refused him he cursed her so that no one would ever believe her prophecies. That was rather unfortunate because when she foretold that  her brother Paris would bring about a war and the destruction of Troy if he went to Sparta, no one believed her. So Paris went regardless, stole Helen (the wife of the king of Sparta) and we all know how that turned out.

1. Jason was a hero of  Greek mythology, the leader of the Argonautic Expedition, whose mission was to retrieve the Golden Fleece in order  to become king (that’s a whole other story). He is mostly known as the husband of Medea, who helped him retrieve the fleece that was guarded by a never-sleeping dragon. Jason was not the most faithful of husbands though, and got engaged with someone else. This made Medea, well, kind of jealous and vindictive…and it got ugly. Yes, yes, she’s the one that killed her children – their children in fact.

2. Alexander (or Alex) derives from the ancient Greek words ἀλέξω (aléxō) “defend” and ἀνήρ (anḗr) “man”; in other words,  the “defender of man.” The most famous Alexander in Greek history was Alexander the Great, the king of the ancient Greek kingdom of Macedonia who, by the age of thirty, had created one of the largest empires of the ancient world, stretching from Greece to Egypt into northwest India and modern-day Pakistan.

3. Philippos (or Philip, or Phil) derives from the words φίλος (the one who loves) and ἵππο (horse), so essentially it means  a lover of horses. In Ancient Greece, only the rich could afford to own horses, so Philippos could also mean “noble.” The most famous Philippos was the father of Alexander the Great and king of Macedonia before his assassination triggered the rise of his son to the throne.

4. Dionysus, the god of fertility and wine in Greek mythology, gave us the Greco-Roman name Dionysius, which, in turn, gave us the name Dennis, which exists in many languages. Dionysus was unfortunate to be born to a mortal mother who had slept with Zeus, causing the perpetual rage of Hera, Zeus’ wife. Zeus rescued him when he was still an unborn fetus, after Hera burned his mother to the ground, by attaching him to his thigh until he was born. His birth from Zeus made him immortal.

5. Hector, whose name exists in many of the Romance languages, was a prince of Troy, son of King Priam and Queen Hecuba. He was considered the greatest warrior of Troy, before his death at the hands of Achilles, who wanted to avenge the slaying  of his friend Patroclus by Hector. Achilles was so enraged that he dragged Hector’s body with his chariot outside the Trojan gates for twelve days, before he finally accepted to return it to the Trojans for proper burial.