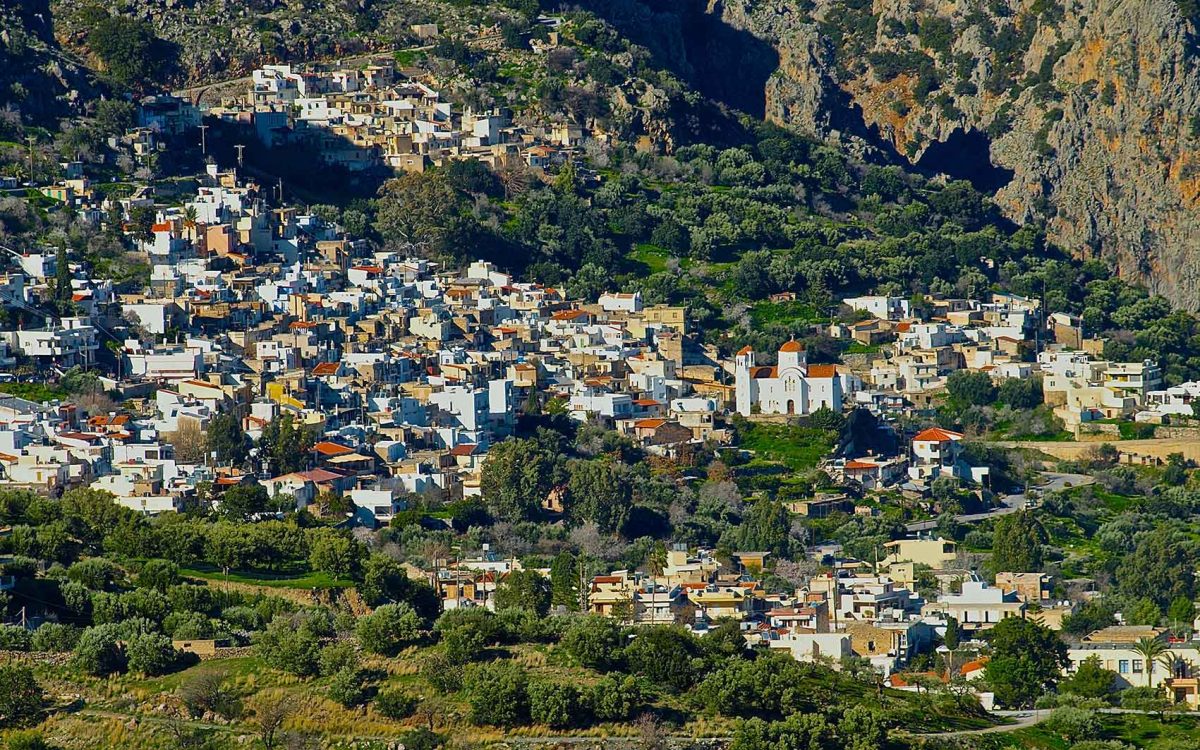 A House in Kritsa

“It was all a bit spontaneous,” I say, when people ask me how we came to buy a house in Greece. And so it was. But it was also the result of a forty-year love affair with the country, which began with a cassette version of My Family and Other Animals.

When I was a kid, my dad loved driving holidays. The sort of holidays where we’d get in the car on Merseyside on a Friday night, and get out again three days later in Portugal. For my sister and me, the only entertainment was recordings of Top Of The Pops, (made by pushing our tape recorder up against the speaker of the telly), a crackly version of Jasper Carrott’s stand up routines, or the rich voice of actor, Gerald Harper, reading My Family and Other Animals. Over four cassettes we followed, breathlessly, the mad adventures of the Durrell Family, in the sun-washed, looking-glass world of Greece. 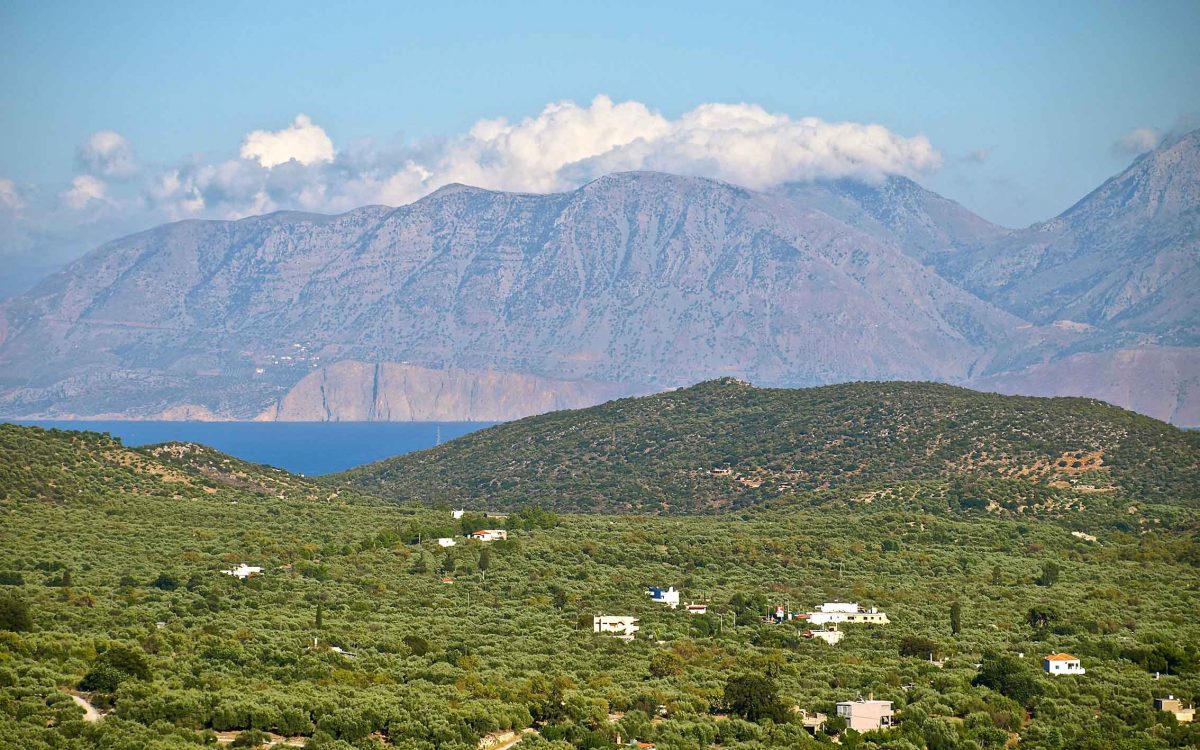 View from the balcony across Mirabello Bay towards Mochlos. © Claire Lees Ingham

My passion was cemented when, at twenty, I fell in love with a student from Thessaloniki. He was studying French and Film alongside me at a Scottish university. When we were sent together as scholarship students to California, he spent the year telling me stories about Greece, prompted by the Californian weather.

“Of course, it’s even better than here,” he’d say. “We have good coffee, and everyone smokes!”

To a girl from rainy Merseyside, it sounded sophisticated, exotic, and made of sunshine.

And then, observing me one day while we were at the beach, he said, “You should always live in a country where the sun shines…”

The boyfriend from Thessaloniki did not last, but the dream of living in Greece persisted. Building on the few words of Greek I had learned, (several of them the foulest swear words, I later discovered), I joined a night-school class, where I learned enough of the language to get by on yearly holidays to the Greek Islands. The only rule was never to go back to the same island twice, unless it was the island where I would live. 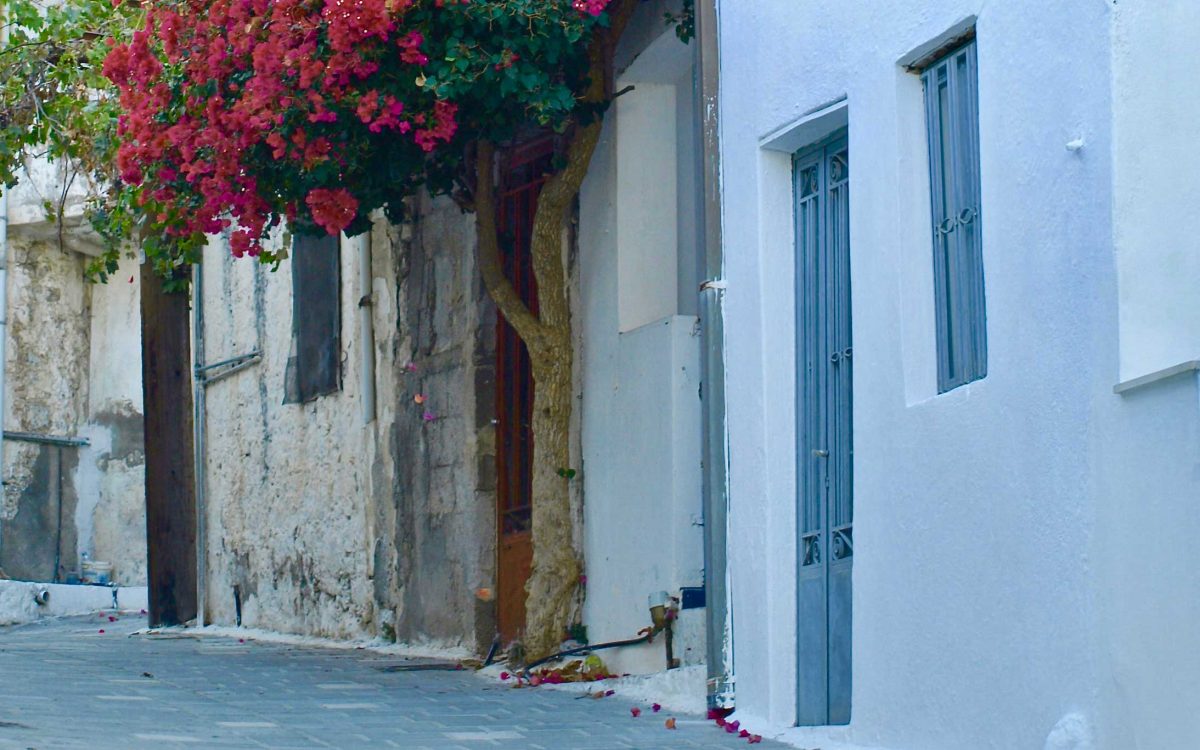 Kritsatopoula Street (our street, but the entrance to our house is tucked away). © Claire Lees Ingham

On one of these holidays, my husband and I fell in love with a ruin right on the seafront in the tiny beach resort of Assos on Kefalonia. When a waiter in the local taverna told us how much it was, we couldn’t believe it. Over a million pounds? Surely we’d got the numbers wrong? One too many noughts? But no, the price was correct, and so we laughed as we walked past ‘our’ ruin every day, counting the number of trees growing through its walls, instead of dreaming up plans for renovation.

Six months later, on a January Sunday that brought grey skies and sleet, I was desperate to see some sunshine, and searched online for the old ruin in Assos. It was still for sale. Still prohibitively expensive. But there was another house nearby that was in our price range. My sun-seeking father had recently died, and my sister and I had split the proceeds from the sale of his house between us. Excited, I clicked on a few more pictures. Suddenly the dream seemed within reach… 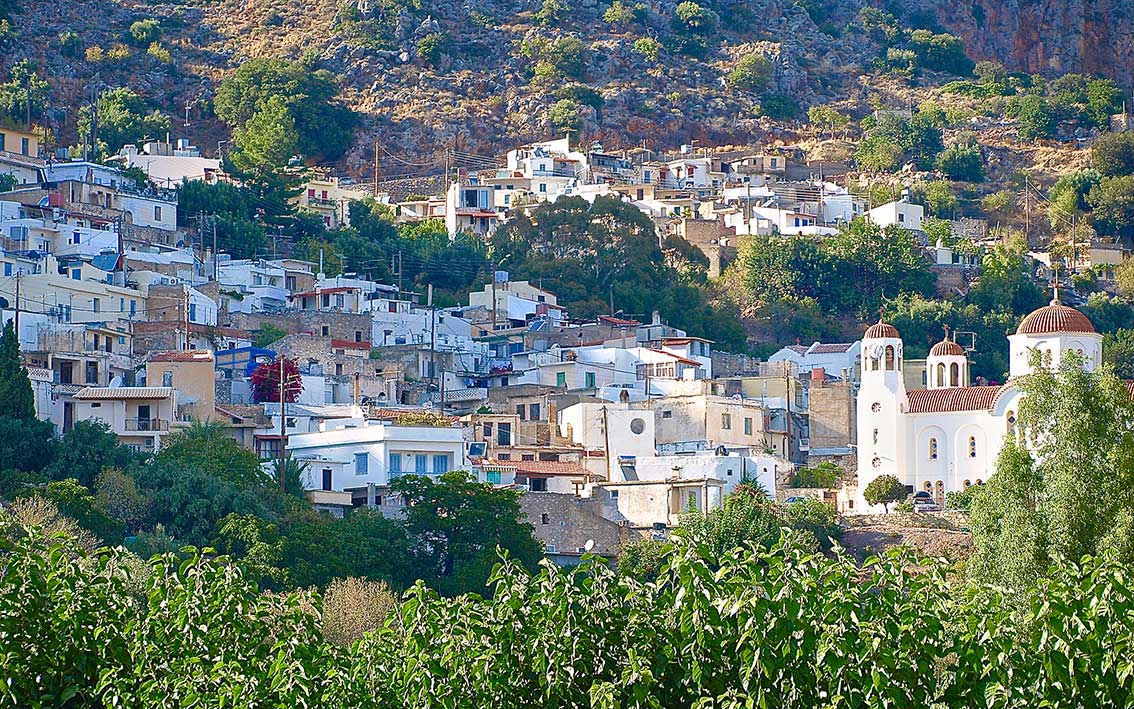 Kritsa village (our house is tucked away on the extreme left). © Claire Lees Ingham

Then I opened the details of another house on Crete – an island that my husband and I had visited on our first holiday together. It was a perfect house in a tiny hill village, away from the holiday resorts.

“Let’s go and look,” said my husband, peering over my shoulder. “Take a weekend and check out a few places.”

Emails flew backwards and forwards with a British woman married to an estate agent in Agios Nikolaos. When we met Wanda, she seemed as crazy as our impulse trip – streaks of pink and purple in her hair, and a driving style that can only be described as ‘local’.

For a day and a half, Wanda drove us up into a succession of tiny mountain villages with warm-hearted Greek communities, and showed us stone houses in various states of repair.

At the last property on the list, we were struck dumb as soon as she opened the door. At the far end of the main room was a wall of glass, which looked out over the amphitheatre-shaped village, towards Mirabello Bay, and an azure sea. 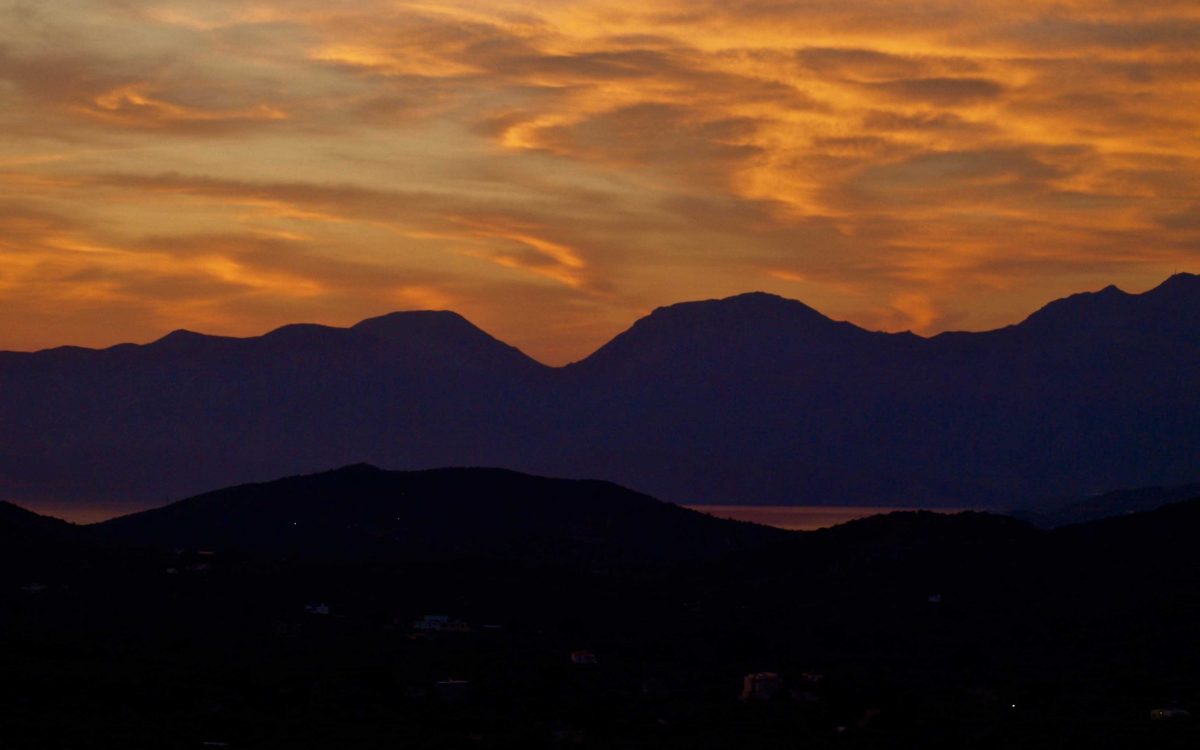 There was a complication, of course. The bottom floor of three was a self-contained studio, to which only the owners had a key, and they were away for the weekend. We went for a late lunch in a local taverna, and discovered from chatting to the locals that the owners were in conflict about selling. The man wanted to leave. The woman wanted to stay.

“Forget it,” I told my husband despondently, “That house isn’t for sale.”

We flew back to England agreeing that it had been a mad adventure while it lasted, but, for now, we weren’t buying a house on Crete,

A week later, we had a call from Wanda.

“The owners have decided that they’re moving to Spain. Are you serious? Interested?”

We looked at each other, and the hesitation was only because we were both grinning so hard. “Yes, I think we are.”

A few months later, we collected the keys from beneath the plant pot where the owners had left them, and moved into a house, one third of which we had seen only in video clips. 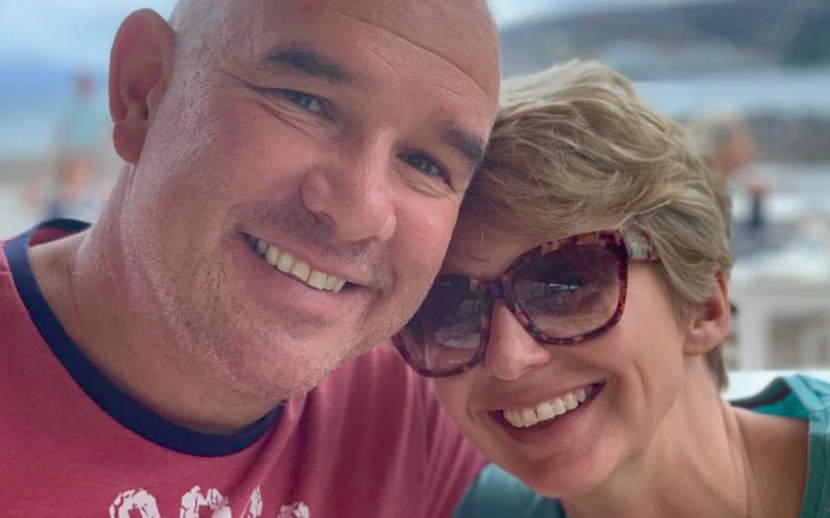 Me and my husband Craig. © Claire Lees Ingham

The view, and the welcome of the locals are still the main reasons to love our island home. We’ve been adopted by our elderly neighbour, Katerina, who speaks no English, tolerates my simple conversation, and who cooks the most perfect, tiny cheese pies – and by Yianni, who runs the taverna a few steps down the hill.

My father’s chess set sits on a shelf next to a battered copy of My Family and Other Animals – and January days are now crisp, and bright, and sun-washed.

Just as they were for The Durrells.