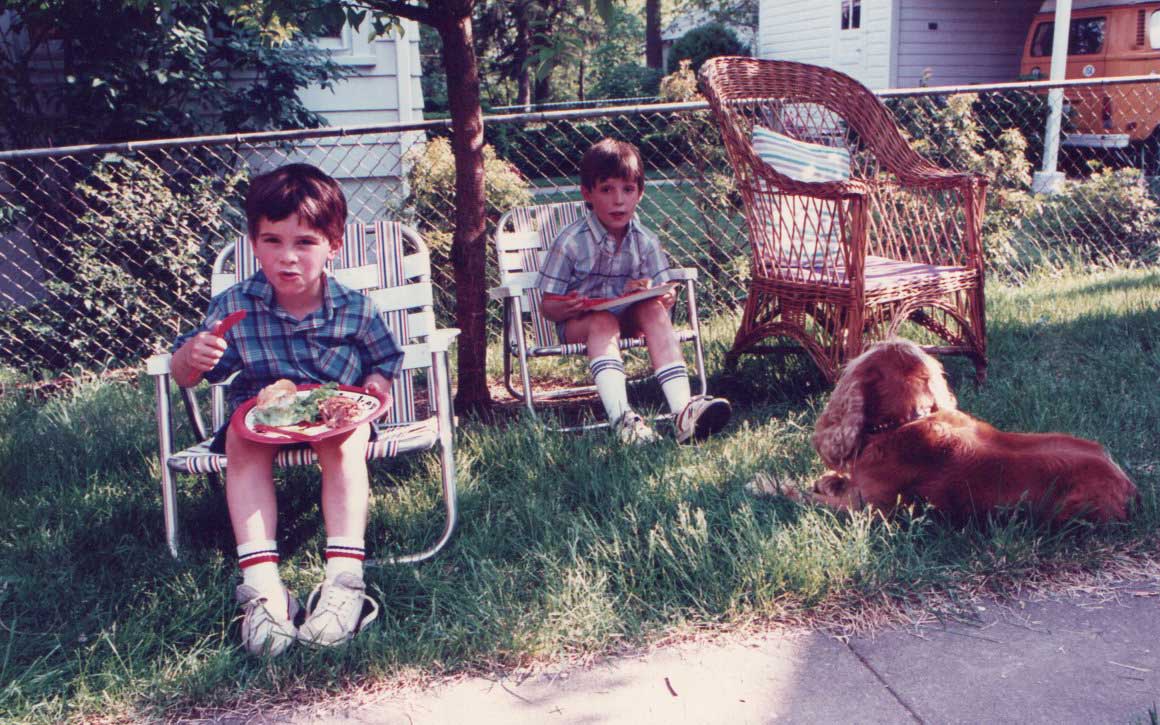 An Easter to Remember

“Can I have the lamb’s teeth?”

Haris, a close family friend whose Washington D.C. backyard we were in at the time, looked at me perplexed, and likely somewhat troubled. It was a peculiar request to come from a six year old.

As I remember this scene, back when Reagan was still president (!), and the internet was but glimmers in a few programmers’ eyes (!!), the Easter Sunday lamb had been taken off the spit. As it had cooked I had been able to closely inspect it with all the fascination that seems to come naturally to little boys in the face of the grotesque. It was, after all, probably the first time I had seen anything bigger than a fish cooked with its head still attached. As I had examined it, I had been hit with an idea that I thought was quite brilliant.

“What do you want the lamb’s teeth for?” Haris asked me.

“I’m going to put them under my pillow for the tooth fairy,” I explained a bit cautiously. My idea being such a winner, it would have been only natural for Haris to want to get in on the action – and it was his lamb and his backyard. But I might at least walk away with a few teeth, I reasoned, a sort of finder’s fee, which was more than I had come in with.

A response along those lines is what I remember expecting, something like, “Wow, that’s a smart idea kid, but don’t think you’re going to walk out of here with all those teeth.”

What I got instead was a full throated belly laugh and a riotous repetition of what I had just said to the others gathered there in that American backyard to celebrate Greek Easter, smoke from the lamb pit still curling over a leafy suburb far more accustomed to the aromas of burgers and hot dogs. Cue more laughter.

Perhaps it was my surprise at the amusement my idea had elicited that caused this episode to stick in my memory. In that moment the world was suddenly revealed to be not quite as I had come to understand it. I think there was a bit of backpedaling as it was quickly explained to me that the tooth fairy is not interested in animals’ teeth, but that only raised more questions in my young mind. What does she do with them? Why only children’s teeth?

Or it could be because even these days when I see Haris – in Athens now – that story has a tendency to come up, recounted I might add, with no less mirth. It’s stuck with him too.

Whatever the case, when I think of Easter memories, that is always one of the first to spring to mind. It’s one that is distinct and unique, one that can be pinpointed to a fairly precise time and place even after all these years.

Most Easter memories are not like that. In my mind at least, the Greek Easter file is a jumble of many subtle variations on the key themes and rituals. Looking back, I can’t pick out many of the Epitaphios processions I have witnessed, although I do know that I am always impressed by the amount of work that goes into covering the bier with flowers, and the incredible perfume they give off. I can’t pick out my favourite outdoor lamb roast, or bowl of mageiritsa, or which damn random firework startled me the most. I don’t know what my hit-to-loss ratio is on red egg tapping, just that I’m usually one of the last eggs standing (and I will take my secret to the grave).

One Easter merges with another in the memory, each perhaps in a slightly different setting, and with a slightly different mix of family and friends, but each following the same rhythm of preparation and decadence, of solemn candlelit churches and springtime walks and picnics. And often the first splash in the sea.

Which is why this Easter is going to really stand out.

This Easter will, of course, be marked by the absence of all of these things. There will be no trips, no get-togethers. There will be no friends returning from abroad to catch up with over cold beer and Lent fast-appropriate fried squid. There will be no jostling in church trying not to set anyone’s hair on fire with the holy flame.

My wife and I have talked sullenly about maybe giving the whole thing a miss this year. What’s the point of making a slap up Easter Sunday roast when it will only be the two of us to enjoy it? (The dog would probably get a kick out of it, but that applies just as much to a jar of sausages). Are we going to dye just two red eggs, and risk a spat about who’s holding theirs too close to the top?

In truth, we will most likely end up cooking some lamb (or perhaps goat, as I am lobbying). And we will undoubtedly speak to all of our family, and many of our friends, and we will reflect on these unique times that we are living in, and what we would be doing now if we were in the Peloponnese all together, or on an island.

And so this year, in our physical distancing and excessive screen time, I think we have also been given an opportunity – that of being able to feel the absence of something we perhaps took for granted. We can examine it, and scrutinize it from the outside in a way that we have not known until now, and so perhaps appreciate it all the more.

And all fairly safe in the knowledge that it will be returned again in the not-too-distant future. Then when the atmosphere will be all the more merry, the crushing of inferior red eggs all the more satisfying.

It is, to be sure, an opportunity no one would have wished for. But like someone regaining their lust for life after a harrowing experience, we must now count our blessings more carefully than we did before.