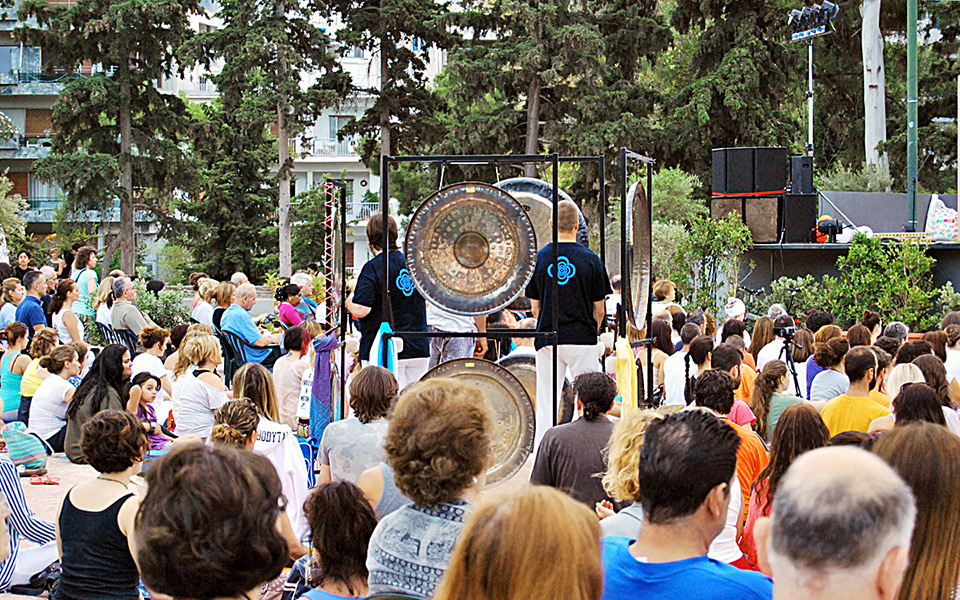 Peace in the Puzzle: Going for Gong

Why soak in an ordinary bath when you can have one with sound waves? In our new column about finding peace and wellness in Athens by experimenting with different classes, therapies and other experiences, we commence our journey through the urban puzzle by trying out the power of the gongs, the huge round metal plates that are hit to release sound waves for therapeutic benefits.

This was my fourth gong bath. Not that I’m obsessed with gongs or anything, but, as a principle, I do like to try out all kinds of experiences, experimenting with, and questioning, the things I enjoy, observing whether the said, and felt, benefits are imagined or real, short-term or long-term and so on. The power of sound has always struck a chord with me, as I have been passionate about singing and music since early childhood and with radio later on in my professional life.

I am intuitively cognizant of the ancient wisdom that instruments like singing bowls and gongs (the use of which, from millennia ago, has been documented in India, China, Greece and Africa), can be powerful healers of the mind, body and spirit, as are other sounds – whether it be the wind rustling in the trees, the sea, a child’s rainbow-coloured laugh or the calming monotony of rain… The first time I heard of gong baths was around six years ago when the internationally acclaimed Master of the Gongs, Don Conreaux, visited Athens.

He maintains  that “if we accept that sound is vibration and know that vibration touches every part of our physical being, then we understand that sound is heard not only through our ears but through every cell in our bodies.”

I found the gong experience unique and mesmerizing, relishing in the mere indulgence of laying down to listen and feel sound waves rolling over and through me, followed by the peacefulness I felt after.

My second gong bath was around three years later, when I was pregnant and Conreaux was back in town; it proved a pleasant way to let go of pregnancy tension, floating in a sea of harmonies while offering my fetus an experiential sonic trip as well.

The third time I tried a gong bath was in the autumn of 2015 at GongLove ArtLab. This time my intent was to gain respite from motherhood stress, and, for the first time, I literally felt that the sound waves emitted from the gongs were like a vehicle journeying me through the galaxy – I had a Space Oddity experience, visualizing ‘stars’ of various colors and feeling the sound vibrations in specific (stressed) parts of my body like a tingle, a caress or a jacuzzi-jet massage.

In this fourth and most recent gong bath, I first dipped in and out of euphoric sleep, initially enjoying the sound of other-worldly choric harmonies that gongs can so fascinatingly create, but suddenly my stressed thoughts from earlier in the day returned and the gong bath experience left me restless.

Outside a nearby window, on Aiolou St, I could hear an accordion playing, clashing with the gongs both in terms of ambiance and harmony, advertising the charm of Sunday night street life, with its earthy, frenetic, human buzz, which I was glad to immerse myself into once I stepped outside.

No, this was not the right night for being spoken to in hushed tones in a dimmed room by serenely smiling people, or chanting mantras before having to lie down for an hour, listening to momentous acoustics; it was a night to shower my smoldering brain with cool dance beats, an icy cocktail or a brisk walk.

This time I realized that, even if something is definitely therapeutic and beautiful, there is a time for everything and that everything has its own time – so to conclude on this note, I am open to having a gong bath again one day, but only when I am certain I am in the right mood for a long soak. 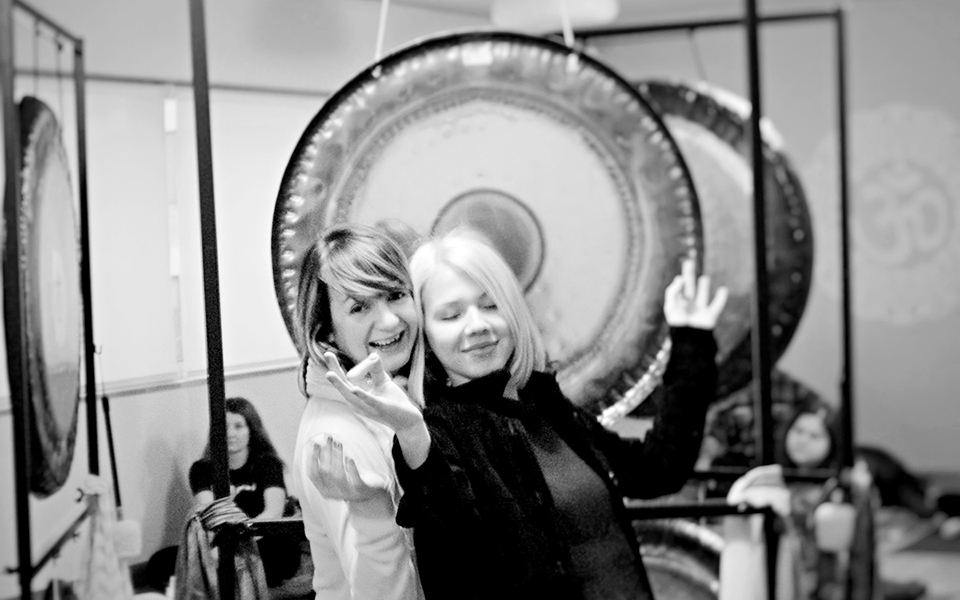 FLOATING IN A GONG BATH

Alexia and I are lying flat like mattresses at the end of a large hall used by the Bhavana Yoga Center in the heart of Athens as we seek to warm up our hearts.

No matter what, mine won’t.

The space is cold and the sound of an accordion is audible from the street, possibly played by a roving street musician, which breaks my concentration during the yoga exercises performed prior to taking the Gong Bath.

Oh, by the way, we came here for the Gong Bath. The exercises entail experiencing a meditative process when the gong is struck by others in a specific way.

Alexia said I would feel the vibrations all over my body. Sound catharsis. For the time being, we are still at the yoga exercises stage.

I look around and the ratio of women to men is 80/20… Participants  include females of all ages and a father with his nine-year-old daughter. Also present is a man taking photographs and, in the middle, a formation of gongs to be played by a trained musician.

I try to concentrate at a deep level, which proves difficult. We are seated cross-legged.

“Focus on your noses,” we are told.

Immediately afterwards, the room’s entire group of cross-eyed little Buddhas begins chanting “OOONNNGGG, GUURUUU” in unison. The truth is that a pleasant vibration is created by the sound of our words.

As time goes by, however, we feel increasingly cold. We put on our jackets. We have all consumed plenty of water, as we had been told to do. We can’t visit the toilet from the moment we lie down and the gongs start sounding – in other words, now.

We slowly lean back onto our little cushions and cover up under the blankets. Alexia and I grab two each. The best mental balance, it is said, lies between sleep and wakefulness.

We will remain in such a serene state for roughly one hour. Many group members, of course, doze off, which is not a bad thing.

Gentle bells start sounding and permeate the entire hall. I try to make myself comfortable. Everybody has lied down flat on their backs.

I came in after a tiring day, so I swiftly fell into a “meditative state”. Certain surreal thoughts, ones I can’t remember now, cross my mind. The sound of the gongs does not let me sleep. Every now and then they are struck louder and gradually increase in volume. It’s like entering and exiting dreams while also realizing the existence of reality.

I crave for loukoumades (fluffy dough pieces topped with honey and cinnamon). I imagine falling off a step before being jolted to reality. I don’t feel any vibrations through my body. And I can’t exactly relax. Of course, these are mental issues and depend on the extent they are believed in. I’m trying. Really, I’m trying, but merely manage to control myself at the pre-sleep stage for about forty minutes. Then, compulsively, I want to become fully alert again.

I feel cold, I want loukoumades, and the roving musician’s accordion can still be heard between gong sounds, which casts me back to the reality of life out on the streets, as well as the tasks I must attend to once this sound catharsis dream experience is over. I feel physical strain and turn to my side. It feels much better this way. I need to visit the toilet.

Time goes by and various people come close to us carrying little gongs, which they strike just above our heads so that we may wake up. Little bells follow. A girl next to me is snoring. Another, further away, is crying.

I get up in a rush to step outside for some fresh air. The father with the nine-year-old daughter starts a conversation with me to confirm that it is not just him who felt nothing.

Perhaps we had great expectations. The word “therapeutic” is too heavy an expression for what we experienced. Or, maybe, we just weren’t exactly open to all this. If I went back, though, I would just fall asleep. Otherwise, if you find yourselves on Aiolou St, I would recommend skipping number 43, the address of the Bhavana Yoga Center, and heading for number 87, where Krinos makes the best loukoumades you’ll ever possibly have in your life. The honey consumed first warms up the heart followed by the stomach. Now this can definitely be classified as a psychotherapeutic experience.