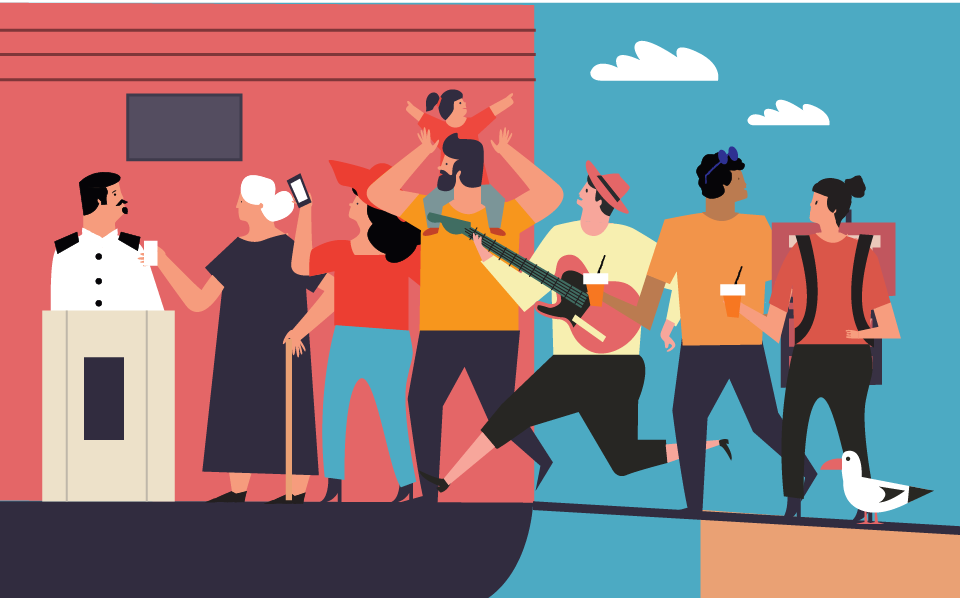 The Humans of a Greek Ferry Boat

They say that to truly understand what lies in the soul of a man, give him a slow internet connection. I would argue that sticking him on a Greek ferry boat for 14 hours can be just as revealing.

As a mode of transport, Greek ferries are a mass of contradictions. They are hives of organized chaos, where honking tangles of cars and trucks are somehow marshaled into disciplined rows by the wild gesticulations of workers shouting themselves hoarse. (Attention drivers: these men may be unvarnished, but they are heroes and deserve respect).

On deck, the experience is at once romantic and prosaic, the magic of traveling by sea counterbalanced by the odd waft of heavy-diesel fumes and the brainless yapping of someone’s inbred lapdog. It’s sipping wine at sunset, only the wine is cheap, and the sunset is partially blocked by a narcissistic couple replicating every Instagram cliche. It’s the on-deck pool that is empty, and anyway looks more suited to dipping sheep than swimming. And it’s the onboard ‘casino’ that consists of 3 electronic blackjack machines running Windows 98.

It’s the happy anticipation of arriving at an island paradise, diluted by hours of boredom and discomfort set to a low, throbbing rumble.

It’s the perfect place, in other words, for some serious people-watching.

Note that here I am not talking about the high-speed catamarans with their airplane-like seating. I’m talking about long journeys on the classic Greek ferries – the large boats with a plethora of indoor and outdoor spaces. These are vessels that often like to pretend they are cruise-ships yet are fooling no one. The only reason anyone is on this thing is because they want to get somewhere.

Faced with hours of travel, and some degree of sleeplessness (it’s a rule of the universe that Greek ferries must depart at inconvenient hours) different people adopt different strategies for making their journeys as painless as possible.

After many years of studying these habits, I have ordered and classified people into several distinct groupings based on their ferry boat behavior. Below are key taxa and sub groupings. 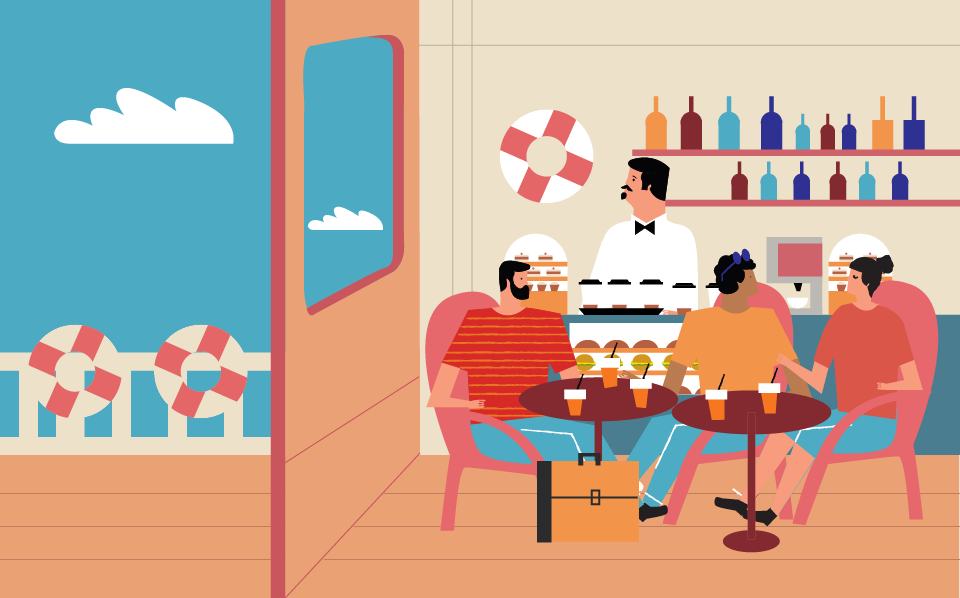 Natural Habitat: Indoors, as close to the provider of coffee as possible

Description: Greece is a country where one of the main pillars of the economy is people selling coffee to each other. It is therefore little surprise that on ferry boats many Greek travelers naturally gravitate to the indoor café-bars like moths to a neon light.

Here, safely protected from the elements, members of Café Society will sit at tables for the entire 14-hour journey, many nursing the same iced coffee throughout in an inexplicable feat of carefully rationed sips.

As a group, Café Society is big and diverse, featuring individuals of all ages and noise levels. Elderly couples who seem to have run out of conversation about a decade ago will gaze silently at the TV on the wall which is alternating between a gameshow and No Signal. Other younger groups will break out a deck of cards and merrily chat, play and joke. A child will giggle, a baby will scream, an old lady will cross herself, muttering. Café Society is essentially a cross-section of Greece. 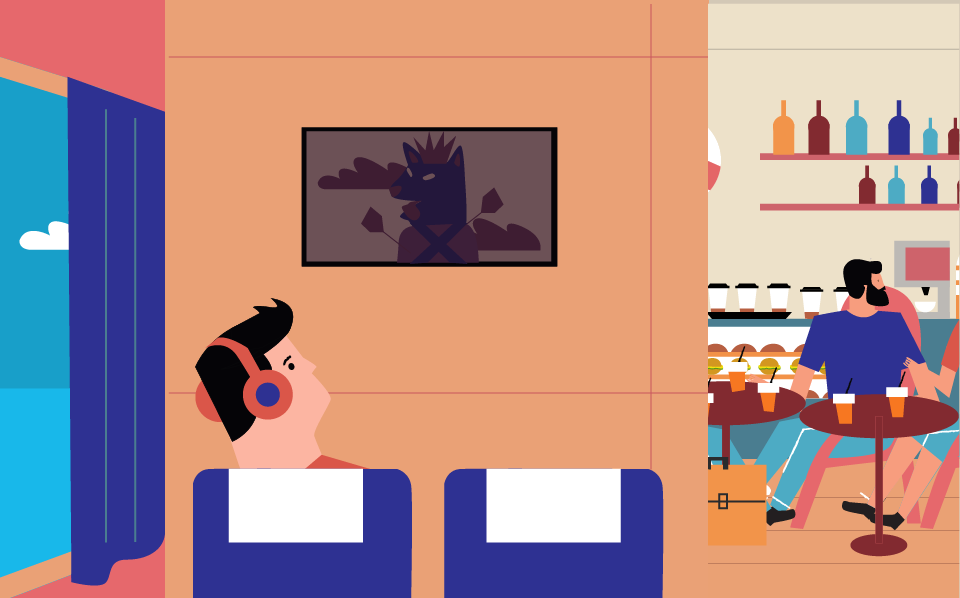 Natural Habitat: Mainly indoors but primarily in their own, carefully crafted bubbles.

Description: While you may spot the introvert around the indoor café-bar, they are not members of Café Society. This is because their primary aim as they travel is to minimize any and all human interaction.

Mostly teenagers and young adults, Introverts wall themselves off from their fellow travelers through the deployment of hooded garments and technology. With noise-canceling earbuds firmly in place and hidden behind one or more screens, they see a ferry boat trip as an opportunity to re-watch a season of Game of Thrones, or any other series about how other human beings are cruel and not to be trusted.

Nationality: They don’t believe in borders.

Description: On ferry boats, most of the seats have been expressly designed to make sleeping impossible. The Campers seek to get around this natural limitation by eschewing the organized seating altogether. They can be found scattered both on deck and indoors – generally sleeping in areas in which the ship’s designers did not intend people to spend any length of time.

Campers achieve their goal of turning ferry boat flooring into passable beds with varying degrees of success, leading to the following sub-groupings: 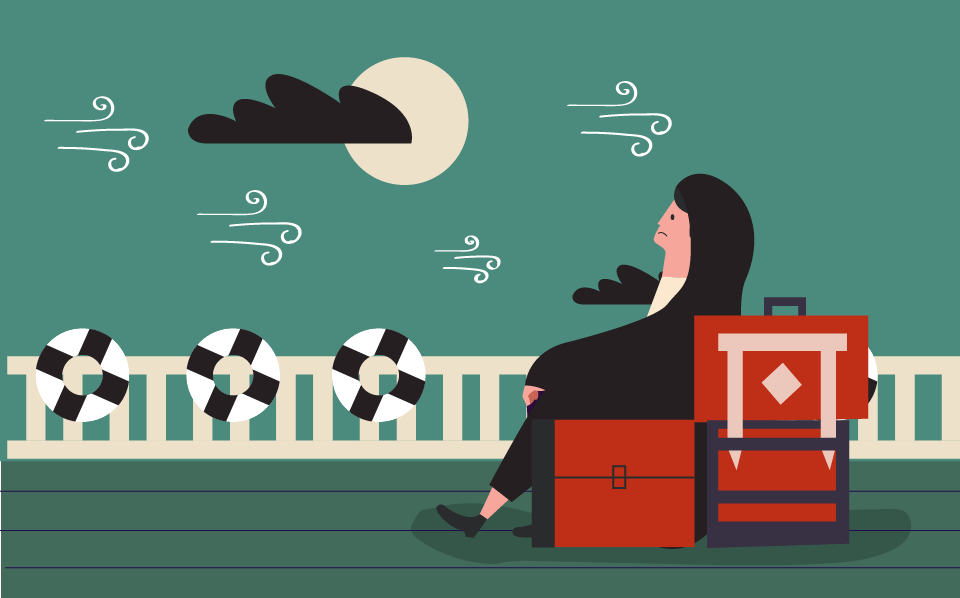 Generally young and on their first solo ferry boat voyages, Amateur Campers begin their journeys full of high spirits and a devil-may-care attitude. But they are naive and ill-equipped, and so they must suffer.

As the boat pulls out of port, they will choose a sun-kissed spot near the front of the boat, where they imagine they will pass the time gazing out at the Aegean, the sea breeze playfully ruffling their hair. They lay down on a thin sleeping bag or beach towel, kick off their flip flops, and congratulate themselves on their cleverness. But as night falls and the boat heads into open water, the sea breeze turns to a maddening gale. Wafts of sea spray begin to catch them, and the realization slowly grows that they probably should have brought a sweatshirt or something.

There follows a period of denial, where through gritted teeth and several layers of t-shirts they try to hang on to their dream. But finally, a stream of water flows across the deck and soaks their bedding. Now shivering, they have no option but to admit defeat and head inside. There they will pass the rest of the trip either laughing the experience off, or in a sullen cloud of silent, mutual blame.

Primarily Consumes: Half a packet of stale potato chips and the salty tang of sea spray and disappointment. 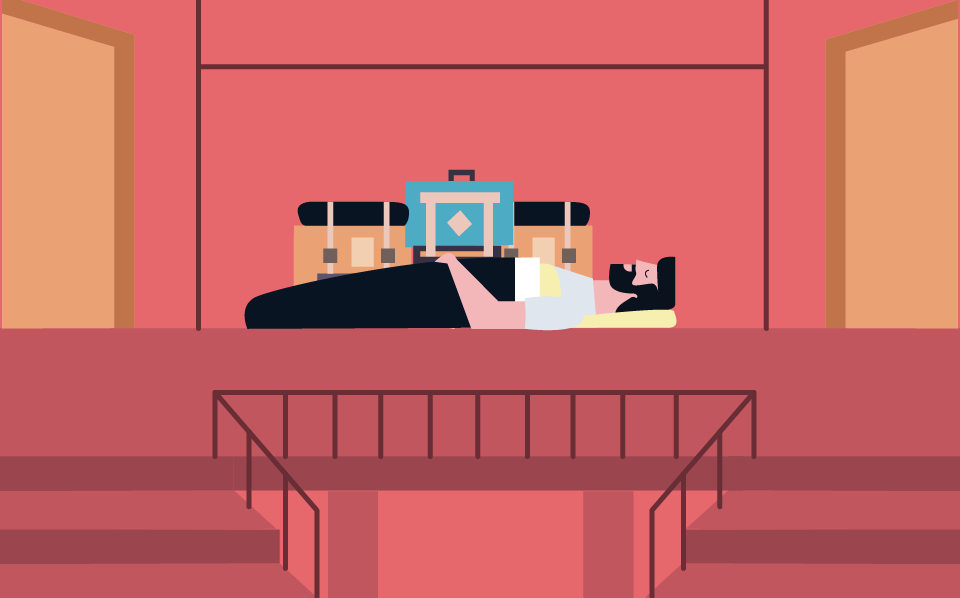 Most amateurs will learn from their mistakes and evolve into Clever Campers. This group still aims to reap the advantages of makeshift beds, but knows enough to avoid the pitfalls, often trading the romance of the deck for the protected confines of the ship’s interior.

They choose their spots cannily, staking out quiet, carpeted expanses away from the toilets and other heavily trafficked and/or malodorous areas. Look for them under the steps and behind sofas. 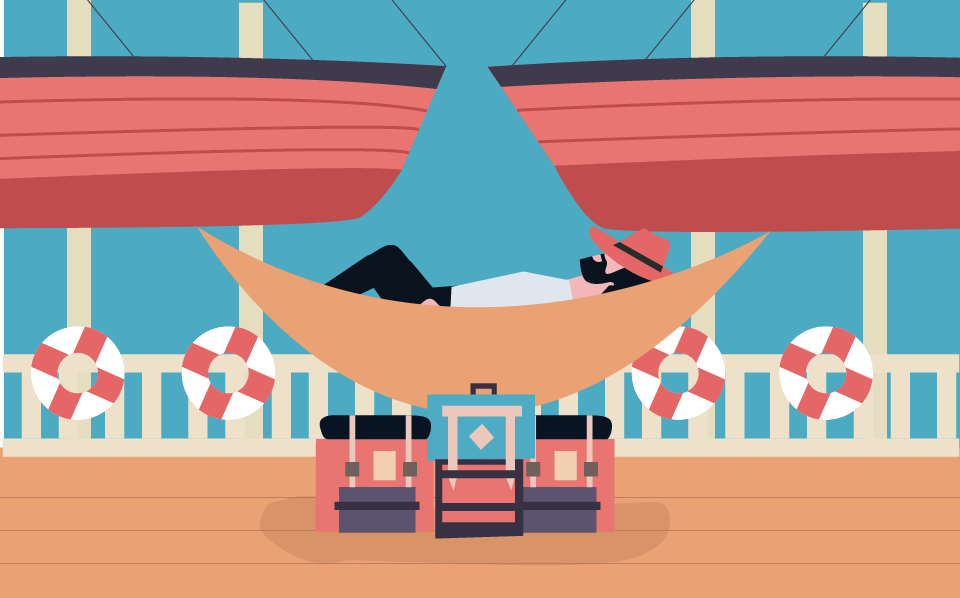 The Next-Level Camper is a rare, but unmistakable creature. Presumably drawing on years spent living in the Patagonian highlands, or with a family of Tibetan nomads, the Next-Level Camper exists on a plane far above most ferry boat travelers. They do not negotiate the limitations of ferry boats; they transcend them.

Forget the mundane beach-mat-and-sleeping-bag combos of the ordinary campers; these people possess far more advanced equipment. You will see the Next Level Camper swaying gently in a hammock strung up between two lifeboats, in a spot where the cool breeze is just right. Or a couple will recline like young royalty on a thick, inflatable mattress, their peaceful repose untroubled by the envious glances of their fellow passengers.

Curiously, Next Level Campers are always in place when you get on the boat, and still there when you disembark. Where they come from, and where they go, is a mystery.

Primarily Consumes: Honeyed walnuts and herbal tea, or some such. 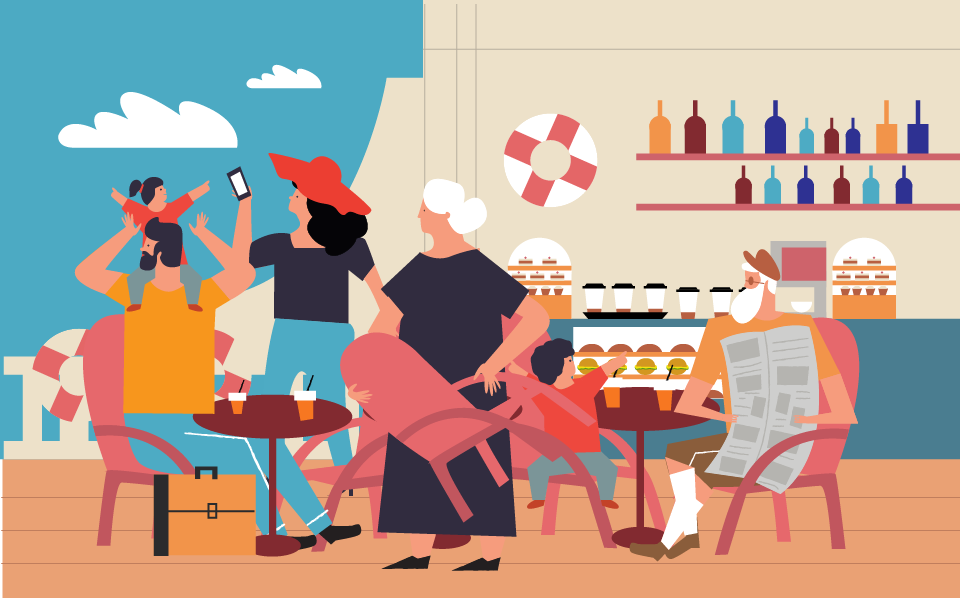 Natural Habitat: Areas of prime ferry boat real-estate, surrounded by the seats she has claimed and will never surrender.

Description: In the jostle for seats and space on crowded ferry boats, there is no figure more formidable than the Territorial Matriarch. Typically a grandmother traveling with her extended family, the Matriarch takes it upon herself to secure as many chairs and tables as possible for the good of the group. She sees all those not related by blood or marriage as hostiles, and will show no quarter.

In her quest to stake out her clan’s fiefdom, she has many advantages at her disposal which she will use with devastating effectiveness. She can move deceptively quickly, or use her bulk to block an aisle. If that is not enough, a well-aimed bag – of which she has at least half a dozen to deploy – will render that comfortable-looking sofa hers.

Most of the seats she claims will sit empty for the duration of the trip, occupied only by unused cardigans and children’s toys. And so it may be tempting to try and negotiate with the Matriarch for the release of one of them. You’d have better luck talking a grizzly bear out of its salmon. She will concede nary a footstool and she is a grandmother traveling with children. One cannot argue with a grandmother traveling with children, a fact she well knows. Accept defeat and move on.

Primarily consumes: While the Territorial Matriarch travels with ample supplies of food in Tupperware boxes (meatballs, cheese pies, stuffed vegetables, etc.) she only eats when she is satisfied that everyone in her party has had enough, meaning never. 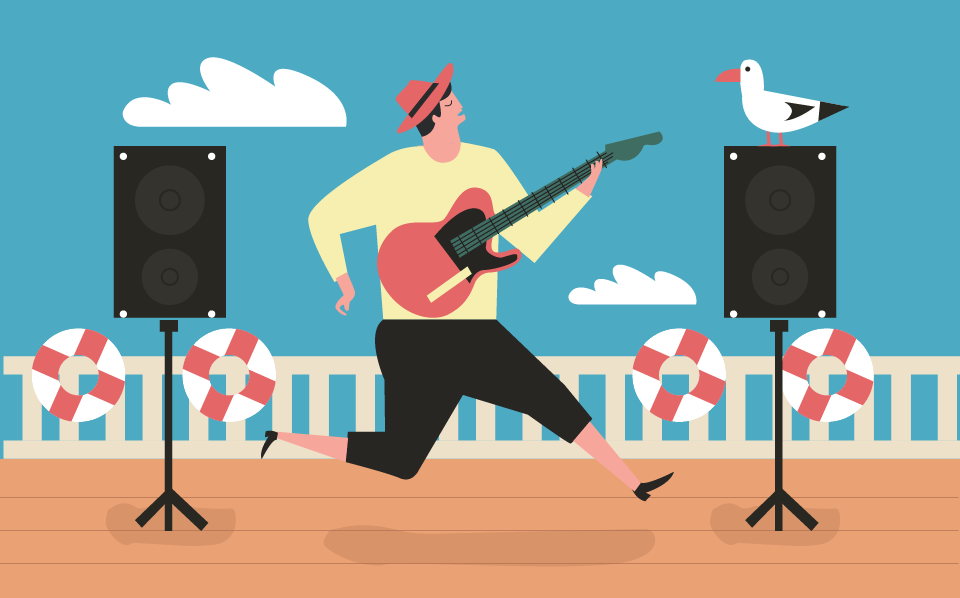 Natural Habitat: On deck, but more importantly, under the stars

Nationality: Children of the world

Description: No ferry boat journey is complete without a group of musicians breaking out their instruments and giving an impromptu performance on deck to pass the time. Sometimes this is only a brief interlude of a few repetitions of Wonderwall and some half-remembered Beatles songs before the repertoire dries up. But more often than not the players are pros on their way to an island festival with more than enough material to see the hours roll by.

They attract temporary groupies who cluster around sharing drinks, making merry, and joining in the choruses when memory and language allow. Together this group forms the Woodstock: some of them may be annoyingly barefoot, but the journey would be poorer without them.

As the propellers churn and the ship motors ahead, musical notes carry across the deck, buoying everyone’s spirits. Friendships are formed, perhaps even some young loves, and the infernal yapping of that damn dog finally fades into the background.

And then, finally, the concert ends in the best possible way: you have arrived at your destination.

Primarily consumes: Beer, wine, and life, with a smile.