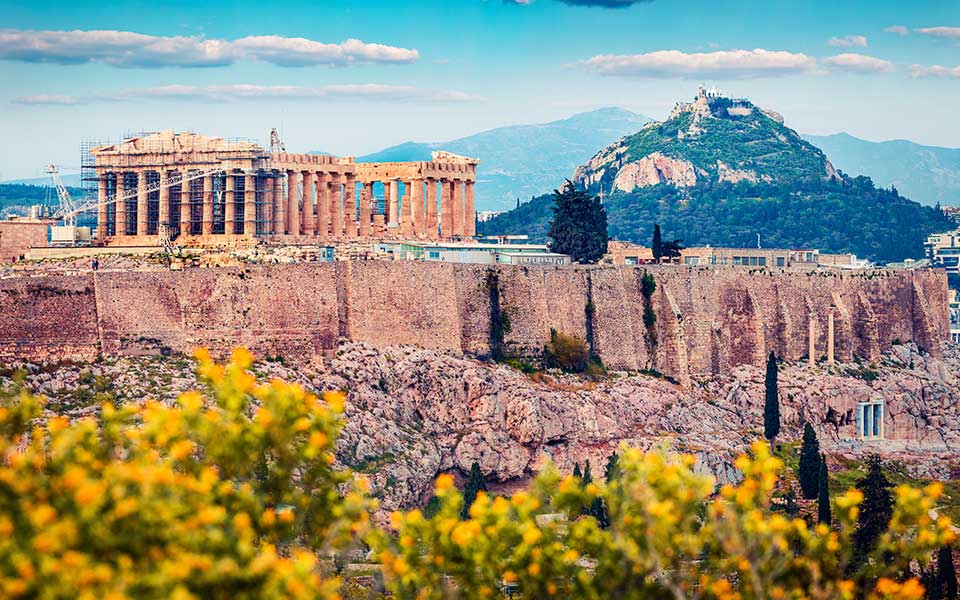 Musing on the Greek Legacy in the Shadow of the Acropolis

How the ancient Greek virtues of wisdom, courage, moderation, and justice continue to inspire us in these challenging and uncertain times.

No matter how often I find myself up on the Acropolis, I’m always taken aback as I stand in reverent contemplation of the glorious Parthenon, the temple of Athena, in Athens. I marvel at the ingenuity of this architectural masterpiece, built with no right angles to create a perfect illusion of symmetry and beauty, a structure featuring marble overlays, friezes and 46 outer and 25 inner Doric and Ionic columns. This temple was built to honor Athena, the Goddess of Wisdom, who looked over and protected Athens. Amazingly, the Parthenon was built in just nine short years and was completed in 432 BC.

As I try to keep my footing on the uneven polished marble slabs, I think of what this Goddess of Wisdom has withstood over the centuries. I think of the German occupation during WWII and of the 400 years of Ottoman rule. I think of the devastation, the bombings, the wars, the destruction, and even those natural disasters such as earthquakes. Athena has seen it all.

As the fluffy white clouds float by, a perfect hue of blue frames this majestic marble structure while the sun’s rays shine through the spaces in between, as if God’s majesty is fully present. I lay my hands on an ancient slab of marble to absorb the energy of this moment. I listen to the flapping of the blue and white Greek flag as it flutters in the distance, and I hear the wind as it circles and dances around this perfect structure. This wind, its distinctively melodic sound, works with the embrace of the sun’s rays to bring tears to my eyes. This is the sound that has accompanied mankind moving through the ages in pursuit of a better world for humanity. This is a call from that singular moment, that height of ingenuity when nature coexisted with mankind in perfect form. The Goddess Athena – the Protector of the City – the Goddess of Wisdom. I am moved to tears. This ancient world has so much to teach us.

My mind is taken back to the ancient philosophers from the 5th and 4th centuries BC – the great Socrates, Plato and Aristotle – who walked in the shadow of these columns contemplating life and giving us the rules of life. Democracy, free speech, individual rights, constitutional government, trial by jury, mathematics, biology, astronomy, atomic theory – so much this world of grand thinkers have given to us that the Western world in particular continues to enjoy to this day.

But in my observations, it is the notions of virtue and humanity that are the most important contributions of these philosophers. In his “Nicomachean Ethics” (350 BC), Aristotle explained to us that to be a “human in the highest form, we must be able to prosper individually while collectively benefiting the larger whole.” In other words, the individual must answer not only to himself, but also to his family and to his community, for the betterment of humankind. The ancient Greek word for happiness is “eudaimonia,” and it also means “to live well” – not just in the physical sense, but also in the spiritual sense of the soul and the spirit, one’s conscience and peace of mind. The term “arete” describes happiness deep within our soul that enriches our lives. It extends beyond our moral comprehension and into the physical world of the daily choices we make, both in action and in words.

In his “Republic” (375BC), Plato wrote of four virtues – the cardinal virtues of wisdom, courage, moderation, and justice.

Courage is the ability to confront fear, uncertainly, difficulty and intimidation. Courage was a virtue in ancient Greece, a tradition which endures to this day. Despite military conquests and economic difficulties, despite challenges ranging from wars to the recent economic crisis, it is the Greek model of courage and heroism which illuminates one’s vision. As Winston Churchill declared, after Greece’s role in limiting Hitler’s expansion into Europe, “… we will not say that Greeks fight like heroes, but that heroes fight like Greeks.” Or as the American president, Franklin Roosevelt, put it: “When the entire world had lost all hope, the Greek people dared to question the invincibility of the German monster, raising against it the proud spirit of freedom.”

Plato’s third virtue is moderation – the quality of practicing self-restraint and self-control.

Finally, and most importantly, there is justice. Plato emphasized the interconnectedness of the three previous virtues. Only when these three prior virtues are present can the human soul be complete and can a society be ordered in a humane and just fashion. In other words, being fair and reasonable in how decisions are made and how people are treated requires wisdom, courage and moderation.

As Greece celebrates 200 years of independence on March 25, 2021, we must also remember how this ancient land gave us an important roadmap for preserving our democracy, honoring our humanity and understanding the importance of leading with wisdom, with humility, and with integrity. During these difficult times of global change and widespread negativity, our world needs to pause and reflect on the teachings and the contributions of Greece throughout the ages. If we are to continue improving mankind, as it has been improved for us, then we must continue to always hold love, faith, and hope in our hearts and to lead with Greek spirit, courage and wisdom!