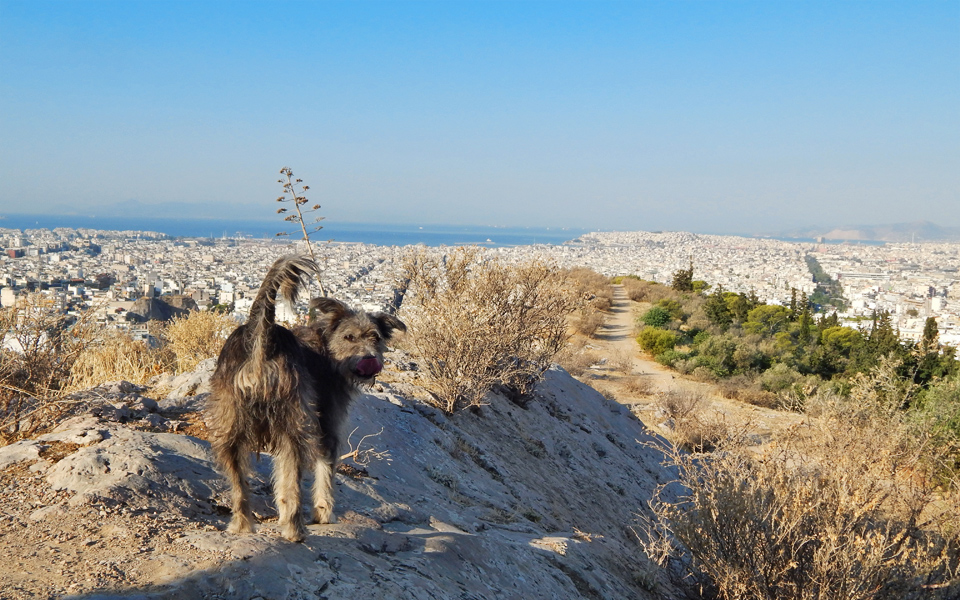 Philopappou, a Fine Getaway within the City

I bless my Cocker Spaniel, Gieki, and my mixed-breed Blacky for many reasons. Dog owners understand why. For over twenty years (at first with Gieki, and now with Blacky) they have accompanied me on these hills every single morning and on weekend afternoons. I say “hills” because what we refer to as Philopappou (singular), is comprised of the Hill of the Nymphs (or Observatory), the Pnyx, and the Hill of the Muses. It is said – or rather, Plutarch said – that it is here where Theseus and the Amazons battled each other.

I exchange my first morning greetings with the gardeners, guards, Mrs. Pelagia who maintains the Agios Dimitrios Loubardiaris church, and talk politics and soccer with the fellow dog owners, who have come here from the surrounding neighborhoods. When I want to be alone, I opt for lesser-known spots. 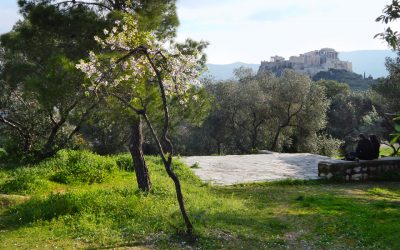 The flora on the hill covers 70 hectares and changes color depending on the season. March’s bright yellows turn into indigo in April and get more multi-colored in May, while the dominant green of the pine trees and the purples of the thyme bushes persist even during the summer – the area’s driest and most “graceless” period. The hill is inhabited by 130 bird species. Many can be seen or heard while walking here.

The area attracts many dog-owners and their canine friends. Late in the afternoon, chances are you will see Aphrodite and her dog Rita or Litsa with Alexia, or Minas with Mangas. Two-legged and four-legged visitors enjoy wondering about these hills on a daily basis. Running into 80-year-old Mrs. Antonia is less likely as she usually arrives extremely early, at about 7am, to walk four laps around the hill (following her doctor’s advice). And you will definitely encounter runners or cyclists, on street or mountain bikes, all usually well equipped with state-of-the-art gadgets, who, no matter what the season, test their fitness levels. Families and couples, locals and tourists, they are all drawn here to stroll about. A few picnic at one of the wooden tables or under the pines. Climbers may also be spotted at one side of the Hill of the Muses, towards the east, which is less known, especially on weekends. And don’t be surprised if you hear traditional music and applause while heading up the stone path, on the west side. That’ll be a traditional Greek dance performance in progress at the Dora Stratou Theatre. 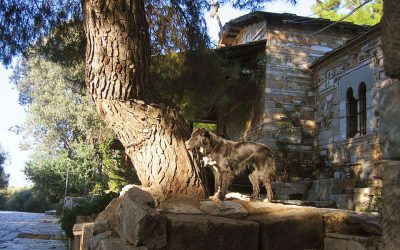 Make sure to wear comfortable shoes, have a bottle of cool water (not all the taps are in working order) and roam about freely, without any specific route. Of course, you are strongly advised not to miss out on seeing the basics – the Pnyx, where Athenians gathered to hold their popular assemblies during antiquity, the Philopappou Monument, built during the Roman period, the Observatory, located towards the Thissio district, and the Agios Dimitrios Loubardiaris church. Various other little delights may be discovered while walking along the area’s stone paths and dirt tracks, all part of the impressive Acropolis-Philopappou area upgrade carried out by architect Dimitris Pikionis during the 1950s. These include static sights, like the Eptathrono, a series of carved-out seats, located at an area above Dora Stratou Theater, which served as a parliamentary assembly or court during ancient times, and the remnants along the ancient Kilis road. For mobile sights,  look out for a young trumpeter who usually heads up Philopappou early in the mornings and settles on one of the rocks to practice without disturbing his neighbors, or listen for blackbirds chirping early in the morning.

The hills are precious to Athenians, as they offer life away from the bustle of the city. It is a place where city dwellers can truly experience nature and the changing of the seasons, and a host of other pleasant surprises.