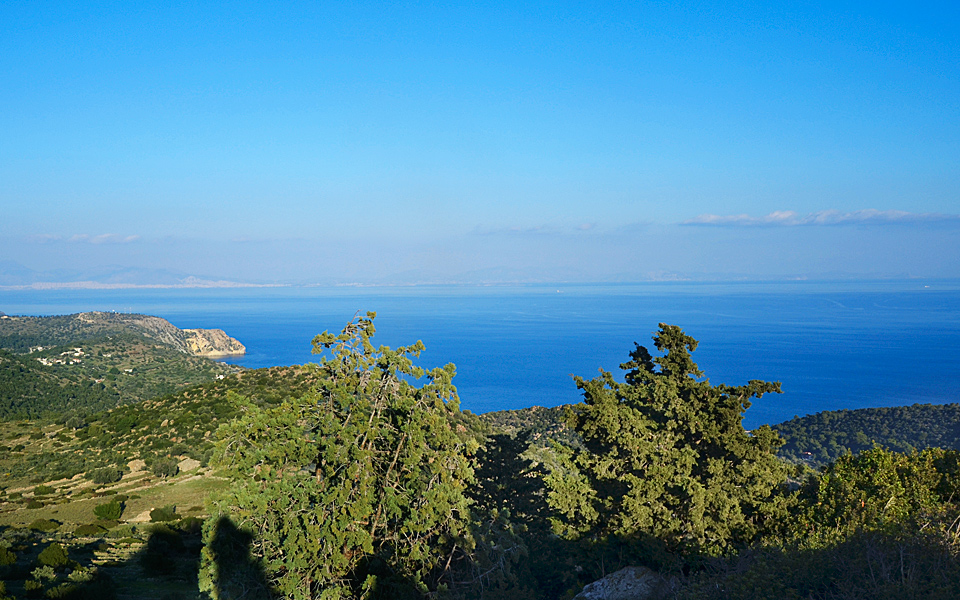 Aegina: Steak With a View

Catch the ferryboat from Piraeus to nearby Aegina and head to its highest mountain for a steak worth traveling for.

Molly is highly energetic as she roams all over the green hill. Asked whether he fears this goat could escape, livestock farmer Yiannis Margaronis, who has let out his herd to graze, confidently responds: “She won’t find any place better than here!” A little brown-colored goat, Molly is probably his favourite of the lot. Not long before sunset, the silence pervading the wider area of Anitseo, a village on the island of Aegina, close to Athens, allows for the bells attached to various herds to be heard from every direction.

The island is just a one-hour ferryboat ride from Piraeus, the Greek capital’s port. This article does not intend to present the usual tourism industry standards offered on this picturesque island, such as its scores of tavernas, the PDO (Protected Designation of Origin) pistachios, or visits to archaeological sites. Instead, the focus is on Anitseo, a village you probably won’t find in travel guides covering the island, a popular weekend getaway for Athenians.

Anitseo is located 15 kilometres from the island’s port and reached following a winding uphill route towards the mountain. It offers increasingly elevated views. The village, inhabited by 30 locals, sits at the foot of Mount Hellanion, Aegina’s highest mountain. The village name, hailing from an old local term meaning “unbeatable”, was established following a feud with the nearest village over a bride-to-be. Much has changed since those days. However, Anitseo has remained a well kept secret cherished by certain insiders. Situated at a prime location on the island, the area has not been saturated by the development of holiday homes. Instead, it is inhabited primarily by the elderly, the oldest of whom has just turned 100. The residents are active in livestock and agricultural farming.

Many trekkers – walking the route to here is worthwhile and not particularly challenging, as long as you avoid nightfall – and good-food enthusiasts make up the bulk of the village’s visitors. Two tavernas operate in the area. They attract well-known Greek artists seeking some privacy, locals who head up to enjoy an elevated view of their homeland, as well as Athenians in search of total serenity without needing to travel long distances.

The larger of the two tavernas operating here is called Petrino, and, as declared by its name in Greek, is a stone-built construction. This taverna offers a lovely view and really delicious lamb chops.

The other spot, Steki Tou Kinigou (Hunter’s Hangout) has a different kind of magical quality about it. It is also set up at an old stone building that is over 200 years old and which served as a school with 70 students until the late 70s. Its seven tables, which only just fit inside, are old yet well maintained wooden desks that were used for the classrooms back in the day.

A small connecting room that is used for the taverna’s kitchen once served as the home of stationed teachers. A window has now been cut out, offering a view from the dining area into the kitchen. Flower pots, fresh herbs and spices decorate the ledge. Vintage advertisements hang on the walls, as does a sign declaring, in English: “This is not Burger King. You don’t get it your way. You take it my way or you don’t get the damn thing.”

The taverna’s owner, Angie Zissimatou-Droulia, a Greek-American, who is also an English language teacher spent her childhood summers on Aegina and opted to settle on the island when she decided to launch her own language school.

She has spent the past 20 years living in Anitseo, next to her little taverna, which prepares the best T-bone steak you’ll ever have. “Angie’s T-Bone steak,” as her friends excitedly refer to it, is an exquisite experience for all the senses. As the taverna is limited in size, diners inevitably pick up on the mouth-watering scent drifting their way from the barbecue before taking delight in seeing their steaks arrive as hearty, generous portions served in big dishes. 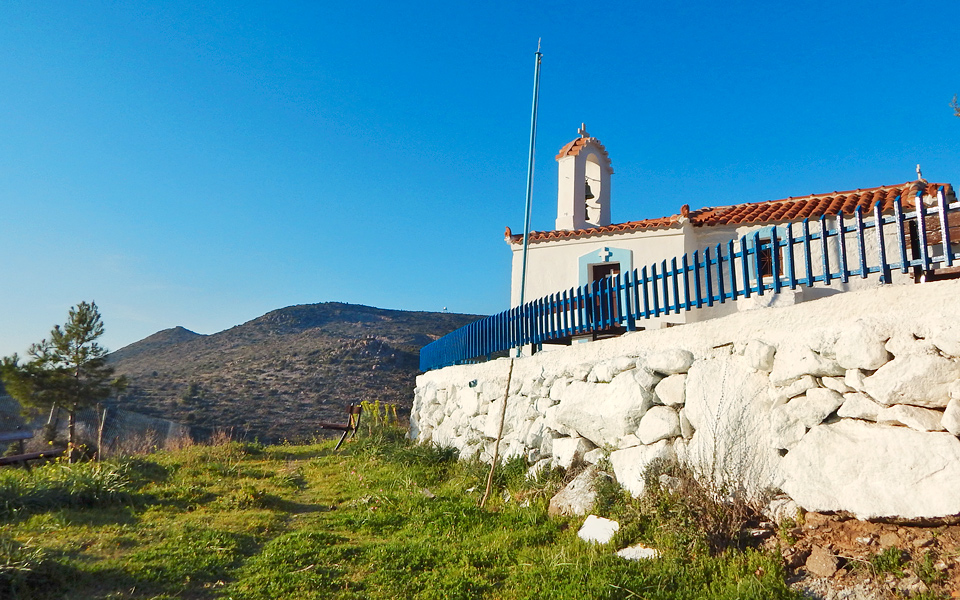 Cutting the first amazingly tender piece and tasting it is pure hedonistic bliss. Diners who do not prefer their steaks medium, the recommended way, should keep in mind that this meat is locally produced and prepared by specialists. Don’t object, just let the experts do their thing.

Any attempt to describe this eatery does not justify the quality of the actual experience. Its homemade bread loaves, another bonus, are baked in a wood-fired oven for two-and-a-half hours, while the fries, wild greens, and cheese are all local. It is also worth trying the rooster with thick spaghetti, stewed goat, and fava. For dessert, consider the milk pie, homemade yogurt topped with syrup-immersed sweets, or loukoumades (fluffy fried dough pieces covered with honey and cinnamon).

Following meals, before sunset, Angie offers diners small tours, the route of which includes an old mill where wheat was once ground – the spot offers a view of the entire Saronic Gulf, all the way to the capital’s southern coastline – Ai Giorgis, a blue-and-white chapel for which she holds the keys, as well as other hidden natural beauties. Along the way, Angie likes to tell relevant stories from the past, including old local customs that have vanished, and others that have not and will not for as long as Anitseo’s 30 locals continue living here.

* All photos by Antonia Petriti